During my first season as manager of Manchester City, I brought the team and its fans The Double – winning both the Premier League and the FA Cup. Needless to say, we were ecstatic, and it was no easy feat. It required using the transfer market to collect the right players, a few lucky bounces, and the emergence of striker Carlos Tévez as a lethal finisher. I couldn’t have done it without FIFA 10.

My first act as the new manager of Manchester City was to dive into the transfer market. Not satisfied with my keeper or depth in the midfield, I picked up an obscure goalie and Portuguese midfielder Maniche for cheap. Both proved to be vital to the club. The fact that both of them were near the top of the transfer list but weren’t big names being signed for low bucks shows that some of last year’s problems with the transfer market have been fixed.

On the pitch, my team created its own luck, using skill moves for one-on-one situations, controlling the ball with good trapping, and making good attacking runs with off-the-ball players. I also have to credit FIFA 10’s loose ball physics, as I scored a few goals by easily cleaning up sloppy clearances in front of opponents’ goals. My keeper showed mettle, avoiding the bonehead moves that plagued past keepers in the series, although there were still times when my defenders and the manual player selection AI lacked such smarts.

Despite my excitement for what FIFA has going for it on the field, I was disappointed that Be a Pro mode is largely the same, and that improvements to the manager mode are only under the hood (such as more realistic transfers and simulated results). However, the game handles dribbling and other ball control mechanics well, and there is a definite energy on the pitch. Chemistry is an important aspect of any championship team – even more so if you’re going to win The Double – and FIFA 10 brings its pieces together nicely. 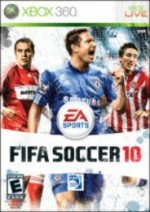 FIFA 10 is a much-improved outing and the best in the series so far.

Purchase More Info
8.5
i
Game Informer's Review System
Concept FIFA comes out playing like it’s an important qualifier
Graphics When it comes to faces and player models, the game’s pretty average. The match-day presentation could also use some improvements
Sound The announcers are sometimes behind the action, but they’ll comment on recent form, your manager’s job status, and your celebrations
Playability When you’re playing with manual player switching, it can be frustrating not knowing when you do or do not have the ball
Entertainment Not a huge leap forward, but more fun than it’s ever been
Replay Moderately High