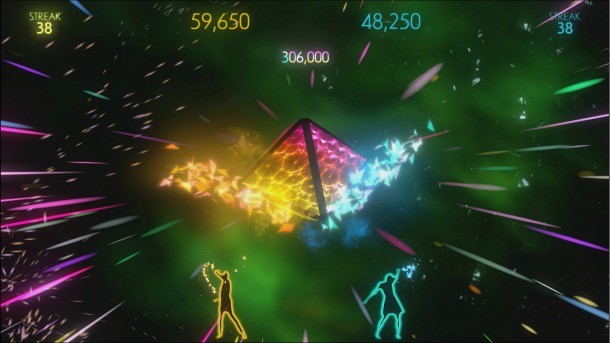 Few studios have the clarity of purpose that Harmonix brings to each of its games. Whether dancing to club hits or shredding on a plastic guitar, its games are built around extending the joy of music creation and involvement to any and all players, regardless of skill. Fantasia is the studio’s most experimental and unusual project to date, sadly arriving several months after Kinect has been all but abandoned by Microsoft. But for the players who do own the motion tracking camera, Fantasia is the most surprising and creative project to harness its capabilities. If Harmonix’s latest project at times fails to find footing as a traditional game, it makes up for it by invoking a novel experience of discovery, creation, and involvement with music.

Years ago, Mickey Mouse apprenticed himself to the sorcerer, Yensid, and his watery tribulations taught the value of learning to swim prior to entering the deep end of the pool. Years later, you are the sorcerer’s newest pupil, ready to learn the magic of conducting the music of the cosmos. The simple story that unfolds is charming in the way of Disney animated fare, with a couple of likable characters, and a light but thoughtful theme about the way the noise of life pulls us away from our creative selves.

Adventures take the new apprentice into the realms of Fantasia, each a discordant and darkened environment waiting to be awakened with music and life. These artful realms recall the dancing hippos and frightening devils on the mountain of the original film, but expressed through imaginative new visions. Players visit the magical forest populated by a mischievous Yeti, a majestic solar system that transforms into an 8-bit wonderland with a gesture, and eight more equally amusing settings. Each realm is filled with little secrets to discover, each of which manipulates both the visuals and soundtrack of the scene. Hidden niches in the realms offer musical minigames that further accentuate the realm’s aural landscape, like preparing the routine of a dancing troupe of vegetables, or drawing the music out of circuitry in an abandoned space station. Exploring these locales is fun, but it’s a shame that the game has frequent and lengthy loads between content pieces, songs, and new areas. The long waits feel particularly tedious in a game about the immediacy of the creative drive.

Musical touchstones are tucked away in each of Fantasia’s six realms. These entryways into a song offer the meat of the gameplay, as you swing your arms around like a cross between Harry Potter and a precocious child pretending to conduct a symphony. Prescribed motion cues flit across the screen, and you’re soon punching, flicking, and sliding your hands in accompaniment to the wide-ranging soundtrack. The motion controls take getting used to (start the motion ahead of the cue), but the camera’s responsiveness is excellent, and I found both musically literate and rhythmically challenged players got the hang of it within a song or two. Self-conscious players, on the other hand, may want to look elsewhere. Even more than many dancing games, Fantasia makes you look like a crazy person.

Fantasia plays in a large musical sandbox. On-disc selections skew toward recent popular hits, like Lorde’s “Royals” and Nikki Minaj’s “Super Bass.” But sprinkled into the mix are old classics like Peter Gabriel’s “In Your Eyes” and Queen’s “Bohemian Rhapsody.” Harmonix didn’t forget the roots of the Fantasia concept, either. Several of the tracks are gorgeous new classical recordings by the likes of Vivaldi, Mozart, and Tchaikovsky, as well as some stellar new pieces by game music mainstay Inon Zur.

While gesturing along to the music is fun in its own right, the real magic comes through opportunities to remix. Each song is packaged with two additional remixes that further stretch the musical sandbox into a playground. Pop tunes morph into big band arrangements. Classical melodies are layered with drum and bass. Mixing and matching these mixes at multiple switch cues throughout the song lead to a version of the music that is all your own, and there’s a mounting excitement as you get swept up into your creation. That’s why it’s a shame Harmonix has locked the mixes behind replays of the song – it’s not until a third run at a piece that you can play with all mixes from the start. In addition to full remixes, composition spells offer additional ways to shape the music, adding a melody you built through your hand motions or a rhythmic flourish pasted together from samples. While these little musical sidetracks occasionally falter into cacophony, they often add a catchy new riff into the mix, contributing an even deeper sense of ownership. At times, the final mix as a song concludes feels synergistic and powerful. At other times, the mix is downright silly. Either way, I found myself smiling.

Multiplayer is as easy as a handshake in front of the camera, and I love the cooperative/competitive experience that results. Each player must complete their own color-coded gestures as they compete for high scores.

On that point, even on its most difficult songs, Fantasia rarely offers a true challenge, and the scoring system places too much weight on the value of multipliers established at each of the mix switch cues. Investment in progressions stutters halfway through; new song and realm unlocks carry you through the first half of the game, but too few rewards (beyond just a few bonus songs) await in the second half.

If Fantasia feels at times like it’s been shoehorned into being a game, it’s because the concept doesn’t necessarily lend itself well to gamification. At its best, a sense of playfulness and childlike glee pervades any given session. At the same time, it’s easy to get impatient for the realms to open up, all the songs to be playable, and for the scores to go away in favor of pure musical expression. As it is, those hang-ups don’t prevent me from embracing its weirdness and charm, and recommending it as a worthy (perhaps final?) dedicated project for Kinect. 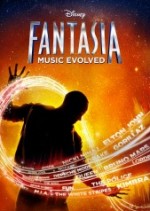 The creators of Rock Band and Dance Central bring us a joyful and experimental exploration of music.

Purchase More Info
8.25
i
Game Informer's Review System
Concept Conduct the magic of music in an interactive sequel to the classic Disney film
Graphics The colorful realms of Fantasia are whimsical and beautiful, while the in-song cues are clear and thoughtfully choreographed
Sound More than 30 songs run the gamut from pop to classical, but the multiple remixes for each make the game exciting
Playability Adjusting to the timing needed for the motion controls takes practice, but once you get that down, the Kinect integration is excellent
Entertainment Simple and unabashedly joyful, Fantasia is a game unafraid to explore new ways to interact with music
Replay Moderately High