The video game industry treats the Fallout property like a hot potato. Black Isle Studios kicked off the series with Fallout and Fallout 2. After Black Isle closed its doors, Bethesda Softworks purchased the rights from Interplay and developed Fallout 3. Although Bethesda still acts as publisher, Fallout: New Vegas’ development reins were handed to Obsidian Entertainment, the studio most recently known for the disastrously received RPG Alpha Protocol.

While the Fallout series suffers from a lack of consistency in its development teams, it is surprisingly stable. All four games offer must-play experiences, and despite a dramatic shift in gameplay design between Fallout 2 and 3, remain true to this series’ heritage and fiction.

Although Obsidian Entertainment employs a number of Black Isle Studios refugees, Fallout: New Vegas is born of the same blueprint established by Bethesda Softworks. The vision shared between these two creative teams is the same. As a result, Fallout: New Vegas shouldn’t be viewed as a true successor or something new, but rather more Fallout 3. And that’s not a bad designation to have.

In terms of its place in this hardware generation, few games offer an experience as deep or as rewarding as Fallout 3. Over 200 hours of my life were spent exploring the irradiated ruins of the Capital Wasteland, and if more content were offered, I’d return in a heartbeat. That’s essentially what New Vegas offers – new experiences for the Fallout 3 fanatic.

The gloomy grey tones of Washington, D.C. have been replaced with the sun-soaked golden hues of Nevada. The game takes place three years after Fallout 3’s final moments, and 204 years after the Great War of 2077. Unlike D.C., Nevada wasn’t hit by a nuke. The Vegas strip is largely intact, and the civilizations spread across the Mojave Desert are thriving (to the extent a culture can thrive in a post-apocalyptic world). The governing bodies in each faction you'll come across are vying for power and control. The length to which they’ll go to raise their standing in the world is what makes New Vegas an enthralling and decidedly different experience.

Your role in this madness is not defined. The game begins with a structured story for your character, called “the courier,” figuring out who put a bullet in your head, leaving you for dead. After the introductory moments, the quest quickly opens up, allowing you to mold the experience to your liking. The amount of interaction you have in this tale is the same as Fallout 3’s, but many of the decisions you make come with severe consequences, much like the nuking of Megaton. If you agree to work for one of the factions in the world – be it Caesar’s Legion, the New California Republic, the Brotherhood of Steel, the Great Khans, or a lovable robot named Yes Man – you may in turn close off missions offered by other factions.

Just being friendly with one faction could shut down an entire thread of missions. If you’re a completist and you want to see everything Fallout: New Vegas has to offer, you’ll have to play through the game three and a half times.

Each path takes the player over many of the same tent pole plot points, but these recurring set-ups are few and far between. In a way, New Vegas could be viewed as three games in one package. Knowing that fulfilling a request for a character could close off entire threads of missions made me sit back and really think about the forces at play in the world, and how my tinkering with them could alter the road ahead. This structure goes beyond the standard "good and evil" approach. You really have to look ahead and try to predict what could happen. You may also have to turn your back on people in need just to make sure a tyrant doesn't get the upper hand.

In just the missions and story, New Vegas offers a nearly unprecedented level of depth. When you throw in the weapon modifications, companion recruitment, and attribute sculpting for your character, it delivers a true sense of ownership over the experience and gives you thousands of reasons why you should come back and play it again and again.

Now, the bad news. I was never once blown away by a single moment. Sure, I laughed when I ran into a cross-dressing super mutant, and thought to myself “what have I done?” when I deployed an orbital laser directly above an NCR military base – but none of the missions or battles stand out as memorable. Most of the action and plot points are enjoyable, but I never once said "Wow. That was great." By comparison, this is a stark contrast to Fallout 3, a game that I felt delivered big moments all the way through.

Obsidian’s writing is top notch (especially the dialogue), and I wanted to see more from most of the characters I met, but none of the scripted moments deliver the nuclear bang that Bethesda achieved. Nothing is on the same level as the black and white VR sequence or the communism-hating robot.

Despite being set in the glitz of Sin City, this part of the world didn't hold my interest. The casinos, as ridiculously colorful as they are, are overly cavernous, mostly vacant, and lacking that over-the-top Vegas charm. The Mojave Desert is, well…it’s a desert. While it delivers that sense of helplessness that all Fallout games should, the locales spread across it are pedestrian. The most notable find is a large dinosaur giftshop. Everything else screams rural Nevada.

The bleak surroundings are made worse by the fact that New Vegas lacks polish. Mid-battle a foe may suddenly plummet through the game world or get stuck on a rock, making for an easy kill. The pathing for AI characters wandering the wastes often takes them into the side of buildings or parked vehicles. When enemies die, some of them will float a good five feet in the air. I even ran into a reoccurring bug where my gun wouldn’t stop firing after a loading sequence. To top it off, I broke the last boss by hiding on a rock. He just stood there as I unloaded 300 bullets into him.

But even with bugs, glitches, and mundane moments, Fallout: New Vegas is great fun. The gunplay (even with a new iron sight targeting system) is as flawed and inaccurate as before, but combat through V.A.T.S. remains one of my favorite things to do in a game. I love the strategy tied to it, and the payoff (usually in the form of a head exploding in slow motion) always feels great. When it comes down to combat encounters, Obsidian delivered in a big way. Fights are tough and the encounters are varied nicely as the adventure progresses. The thrill of survival is heightened even further through the awesome new Hardcore mode. If you are looking for a challenge, this mode will kick your ass up and down the Vegas strip.

Maybe Obsidian’s lack of familiarity with Bethesda’s technology resulted in New Vegas’ plateau. Maybe Bethesda barked orders to make it identical to Fallout 3. In any case, gamers should expect more of the same from this follow-up. If Fallout 3 holds a place among your top 10 games of this generation like it does for me, another rewarding 200-plus hours of survival awaits you. 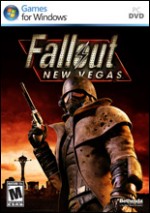 Fallout: New Vegas shouldn’t be viewed as a true successor or something
new, but rather more Fallout 3. And that’s not a bad designation to
have.

Purchase More Info
8.5
i
Game Informer's Review System
Concept A sequel that makes few strides forward, yet retains almost everything that was great from its predecessor and offers it in a slightly different way
Graphics It's easy to lose yourself in New Vegas' massive world, but the believability of the world is stripped away whenever a stiffly acted character appears onscreen. Unexpected freezing can occur due to framerate drops in bustling towns
Sound The voice cast, weapon sound effects, ambient noise (which can sometimes sound like it's coming from a mile away), and Vegas themed score are all top notch. The sound design really couldn't be much better
Playability If you played Fallout 3, you've also played Fallout: New Vegas. Targeting is still unreliable, but V.A.T.S. still packs a satisfying punch
Entertainment The missions and storytelling lack the creativity and large set piece moments of Fallout 3. Exploration and applying your touch to the experience are even deeper
Replay High