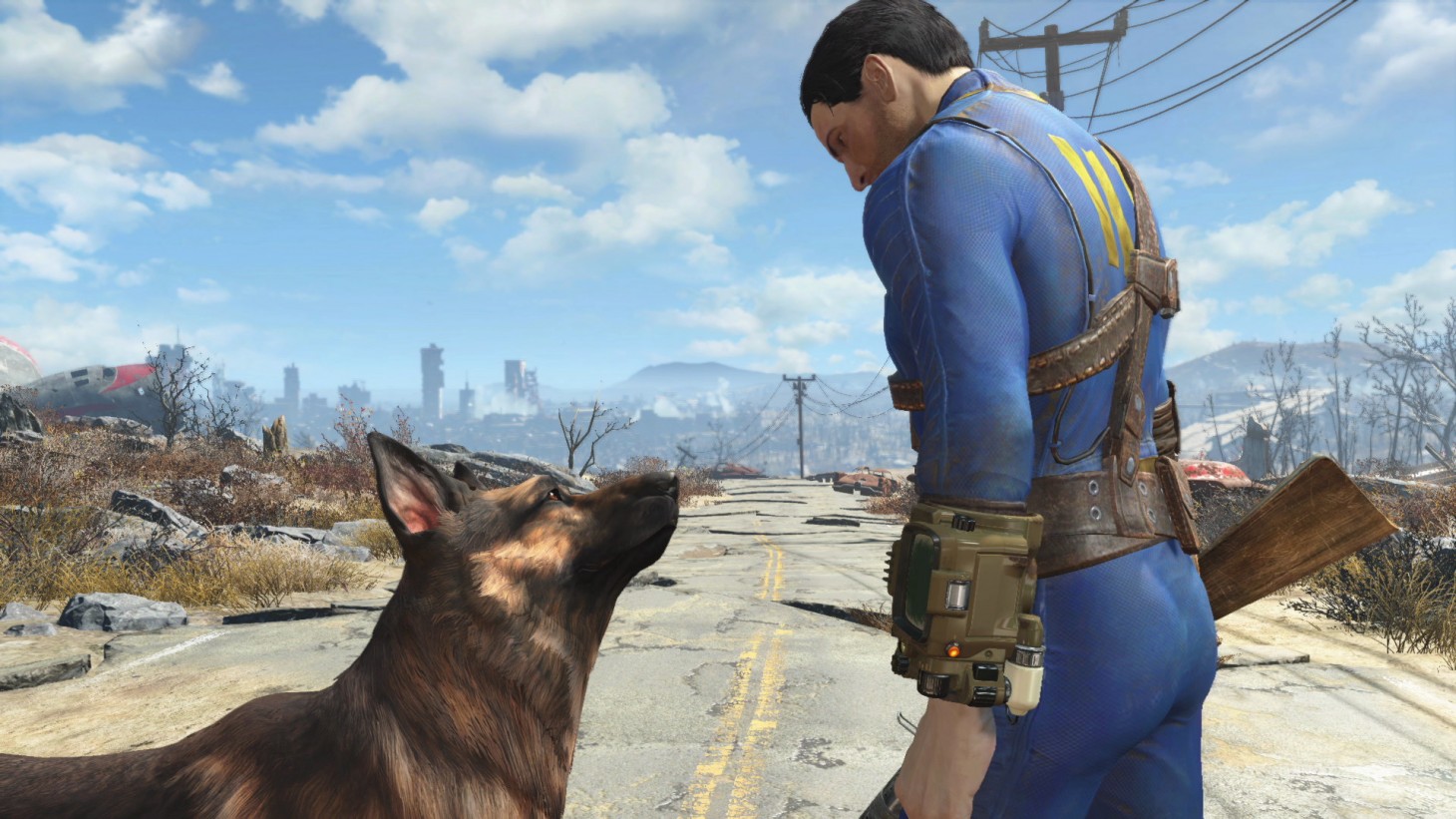 My lone wanderer from Vault 111 is as much a stranger in a strange land as he is a person returning to the familiarity of his own home. His crisis of identifying with the world echoes my journey through Fallout 4, a game that is as new and exciting as it is old and familiar.

Roughly seven years have passed since Bethesda Game Studios ventured into Fallout’s wasteland, but you’d think the development team never left it, as Fallout 4 feels like a well-worn Pip-Boy. The studio clings to many of the great (and not-so-great) gameplay trappings and overarching designs that made Fallout 3 such a captivating release. This wealth of identifiable content is used as the backbone of this sequel – sometimes to a fault – but all in support of making the act of wandering the Commonwealth Wasteland one of the most rewarding (and time-consuming) experiences in gaming.

Despite the image of a large, hulking character on the box art, Fallout 4 doesn’t roar out of the gate with guns blazing. As much as I enjoyed seeing the world prior to the bombs falling in the game's opening moments, Bethesda rushes through this event. The player is given barely enough time to take a snapshot of it, let alone develop a meaningful connection with the family members – whom are supposed to be the central hook of the narrative. The subsequent descent into the vault doesn’t fare much better, and is used mostly to establish an antagonist in the brief minutes the player spends there. The studio clearly wanted to get the player into the wasteland as quickly as possible, but the rapid pace hurts the story in the process. As a result, I didn’t understand who my character was; I just knew what he lost. The wanderer (who can be male or female) comes into his own when he becomes a conduit for your choices, and ends up being more than a blank slate this time around. The new spoken dialogue fleshes this protagonist out, much like Mass Effect’s Commander Shepard. I connected with his actions, but was fascinated by his choice of words and tone, which are not spelled out in the streamlined (and improved) dialogue tree. The protagonist’s lines are well-written and believable, no matter what approach was used in conversation. If you enjoy role-playing as a cannibalistic madman, however, the voice work doesn’t mesh with that fantasy, or any other that detours from a normal mannered person. Interesting, I didn’t rush through one line of dialogue, and never turned on the subtitles. I watched it all unfold in real time, and was only forced to read stories on computers spread across the Commonwealth. I consider the new voice work a giant success for the series, even if it does remove a bit of the player's personality from the experience.

The main story arc for the wanderer offers some surprising twists and turns relating to his family, but a lot of the surrounding story lines mirror events from Fallout 3, and end up falling flat despite the huge world-changing events they bring. The real points of interest come from how you can toy with and poke at the different factions that preside in the wasteland. I reached a point in one faction line that would have completely shut down any involvement I could have in working with the Brotherhood of Steel, and it came early in my playthrough. Player choice pops up everywhere, but it’s rarely as black and white as “save this city or nuke it.” I was forced to make a handful of difficult choices along the way, and can’t wait to see how they play out from other perspectives. The spider-web of choice that Bethesda intertwined is impressive, and it's fascinating to see the inhabitants of the world keeping tabs on your involvements.

I didn’t think Boston would be a great fit for an open world (especially after soaking up the iconic sights of Washington, D.C.), but it proves to be a treasure trove of unexpected discoveries, gorgeous vistas, and (most importantly) valuable loot and resources. Even after getting hit with nukes, the Commonwealth Wasteland is surprisingly colorful and inviting. Diamond City, the central hub, almost has a cartoonish look in its color scheme and architecture. Bethesda clearly establishes the vision of a world repairing itself, and seeing inhabitants work to achieve this goal is fascinating. I enjoyed watching them go about their lives – whether they were hanging out in a bar listening to music, or working in the field. At first glance, the map may look small, but it offers more vertical spaces, and is densely packed with doors leading to sprawling interiors. In other words, there isn't a shortage of content here. 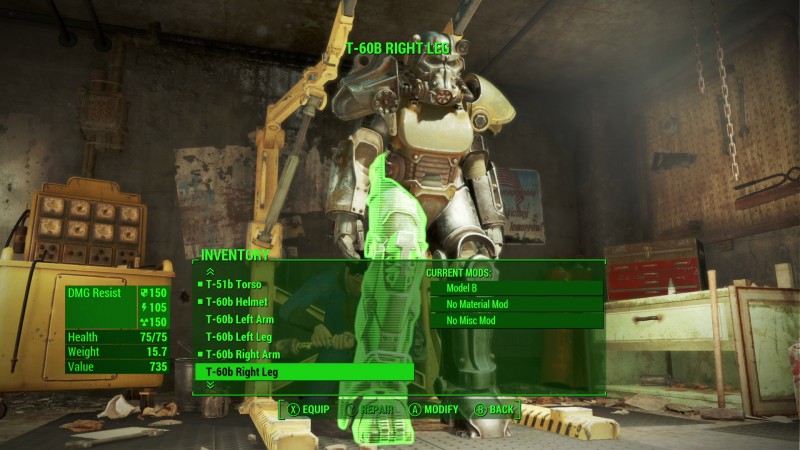 One of the new gameplay wrinkles in Fallout 4 ties into the healing of the land. An early mission pushes the player to help revitalize a settlement, but this task is handled poorly since the building tools are not clearly communicated. I’ve always been in favor of less hand-holding in games, but Bethesda clearly needed more here. I had to figure out how to create electricity, mine the world for resources, order people to harvest crops, and set up convoy lines on my own. These tasks are easy once you understand what the game wants from you, but figuring that out takes more time than it should. The settlement aspect is purely optional, but has a nice hook to it, giving you a satisfying sense of developing a society (much like Bethesda’s mobile Fallout Shelter title). I wanted to grow the settlements as big as I could. Combing the world for resources is the best means of achieving this goal – and that’s one of the most enjoyable aspects in Fallout 4, as it pushes you to explore more.

This next statement holds true for any Bethesda game: The central story plays second fiddle to picking a direction and wandering until you are forced to put the controller down. Unearthing the secrets of this dangerous land is far more enticing than making progress in the main story threads (of which there are many). The side content is where Fallout 4 is at its strongest. I won’t detail any of this material for the sake of avoiding spoilers, but some of it is surprisingly deep, moving, hilarious, and can even include unexpected wrinkles like new radio stations appearing solely in support of that singular mission. If you like strange mysteries like Fallout 3's Gary, you're going to love a lot of this stuff. 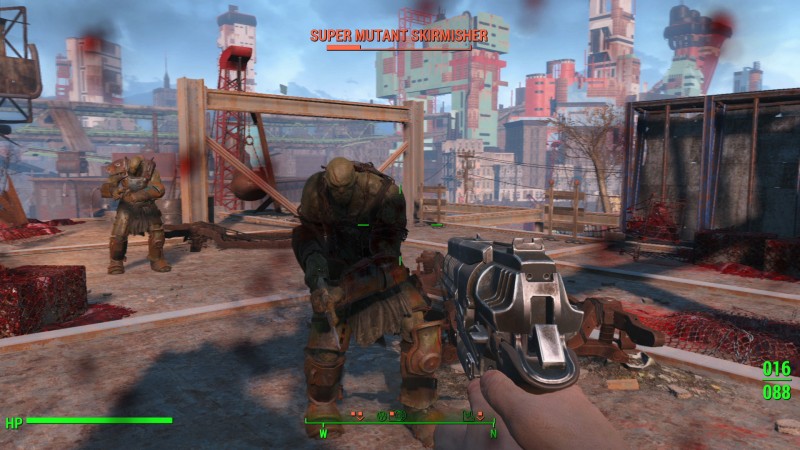 I enjoyed nearly every mission I came across, even though a good number of them follow the simple composition of enter an area, clear it of enemies, grab an item, head back to the mission giver. The variety of enemy types and environments is nice, but long loads occur when entering enclosed spaces, and the map for these areas is a nearly unusable relic from the previous generation of games. Several missions lasted longer than they should have, just because I had to figure out how to reach the objective point.

The flow of gameplay is balanced remarkably well, giving the player nice doses of exploration, combat, looting, and crafting at any given time. The most improved element of Fallout 4 is the gunplay. It doesn’t offer the finesse of a Destiny or Call of Duty, per se, but it feels good, and turned running and gunning into my preferred method of play. I used V.A.T.S. mostly for strategic reasons, such as identifying target locations, and to build up critical hit chances for difficult encounters. The biggest problems tied to combat come from the technical performance; framerate stutters and dips are fairly common in larger firefights and within densely populated city areas. Also, don’t expect much help from your companions, as they frequently run blindly into chaos.

The real game-changer in Fallout 4's combat is the power armor, which functions more like a vehicle that can soak up damage and allow for more aggressive maneuvers. Taking on higher-level enemies has its rewards, as any foe with a star next to their name drops a rare weapon or armor piece. The kicker: Fuel for the armor is relatively rare, so you'll want to scout ahead to see when you should bring your Iron Man suit out. 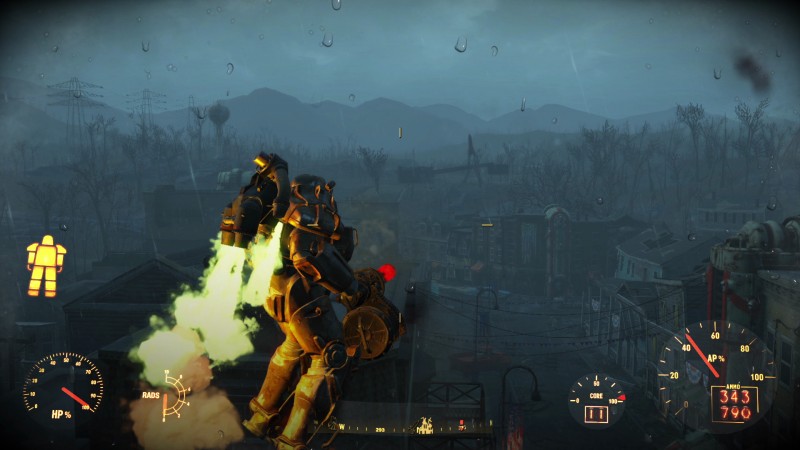 Players don’t have to wield the arsenal that is given to them. Weapon crafting is immensely satisfying and easy to understand, but it comes at the expense of crafting the character you want, as perks are required to truly maximize the depth of this endeavor. The perks are an area where Fallout 4 makes a big step forward in making leveling up exciting and meaningful, but a relatively large step back in having to sacrifice points just to see some of the coolest elements of the game. The solution to this dilemma: Explore more of the wasteland to earn experience points and perks. Given just how enjoyable this element of the game is, that wasn’t a problem at all. However, players who just play the critical path will likely have a scattershot of skills.

Fallout 4 didn’t blow me away like the previous iteration did, but it did keep me thoroughly entertained and fully vested in journeying across the wasteland. As Bethesda's "Welcome Home" marketing campaign teases, when fans of Fallout 3 or New Vegas enter this new world, it'll feel strangely familiar. As one of the top games of the previous generation, this isn't a bad thing at all. Fallout 4 has all of the trappings that can keep you engaged for days on end.

9
About Game Informer's review system
Concept
A straightforward sequel with improved combat and a denser world to explore
Graphics
The visuals can be simultaneously breathtaking and a little ugly. The vistas and lighting are beautifully created, but some of the texture work is muddled and steals some of the finer details
Sound
From the powerful Fallout 4 theme to radio stations filled with classic tunes, the score is brilliant. Most of the voice work (especially the protagonists’) is equally as good
Playability
Gunplay is vastly improved, making the act of exploring the wasteland more enjoyable. Better yet, I didn’t run into too many glitches in my playthrough
Entertainment
Bethesda has created another game you can lose your life in. New experiences just keep coming, and you always have another perk to unlock
Replay
High