Fable: The Journey is the story of a man named Gabriel, his horse Seren, and their unforgiving struggles against the villain Kinect. This is a coming-of-age story for Gabriel, who is introduced as a horse-loving slacker that, after several long and arduous hours of thrusting his arms forward, transforms into an all-powerful mage. He shoots lightning from his fingertips and magically tosses foes to the ground with a subtle wave of a hand – but mostly drives the player controlling him batty with his erratic targeting.

I grew so frustrated with the periodic loss of targeting precision that I was tempted to strangle Seren almost every time I had a chance to bond with her by cleaning her coat or feeding her an apple. That friendship between Gabriel and his faithful steed is the one aspect of the Fable series that is alive and well in The Journey. You don’t get to pick a love interest, rule over a kingdom, kick chickens, or affect the story with your choices, but you do get to care for a horse. Much like Fable II’s beloved dog, this relationship is enduring and full of heart. Gabriel is Seren’s champion. He encourages her to outrun great evil, and knows how to calm her if she becomes distressed. The player must use slow arm movements and soft spoken words to make her stop bucking.

Gabriel, on the other hand, is a hero built from that same unlikable mold as Attack of the Clones' Anakin Skywalker. He's whiny, tells horrible jokes, and even has a padawan-like braid to remind you that he’s Anakin-lame. His quest is enjoyable at times, but its framework mostly consists of entering dungeons to get new magical powers. A predictable and repetitive path is followed from start to finish.

The time Gabriel spends with Theresa (the blind seer featured in all three previous Fable games) often proves interesting, as her past is illuminated and new wrinkles in Albion’s history are uncovered. Gabriel also befriends a handful of nicely written characters, such as a money-hungry bridge operator, and an army of wisecracking ghosts. When this game is trying to be Fable, it succeeds.

When it tries to be a Kinect game, it fails. For every bonding moment that Gabriel spends with Seren, expect to see her veer off of a road into lava, smash her face against a rock, get shot up with arrows, and act with suicidal tendencies. Gabriel is just as unpredictable. He can hit a distant explosive barrel with an electrical blast once, but he may miss it by a good 100 feet the second time. Without any form of visual feedback as to whether or not arm gestures are performed correctly, the action in this game can be extremely frustrating.

Fable: The Journey is one of the few Kinect games that encourages a sitting position. Lower body movements are never used. Most of the action requires arm thrusts, cranking motions, or simple arm-waving. All of these motions malfunctioned at one point or another.

I tested this game on four Kinect set-ups in four well-lit rooms with six different people participating. The results were all the same: The game works great at times, is hit or miss most often, and sometimes just has problems reading any motion. I even did my best RoboCop impersonation, using near-perfect mechanical movements each time, and the game still read a few wrong. Cross-body motions deliver the highest margin of error, but even the simple act of pulling a horse’s reins can lead to an unexplainable change in direction.

Inconsistent controls are not the only problem here. Hardly any of the action sequences deliver sparks of excitement. Roughly half of the game is dedicated to lengthy horse and carriage sequences along winding roads. While I enjoyed soaking in Albion’s gorgeous sights, action is scarce in these moments. I was mostly tasked to collect experience point orbs littered along the paths. To do this, I simply had to turn Seren to the left or right. That’s it, folks. Trot, avoid rocks, and grab as many experience orbs as you can. Let me reiterate: These sequences make up roughly half of the game.

Most of these jaunts are used to reach different on-rails action sequences. In these brief stages, Gabriel moves along predetermined paths, and is asked to remove all enemies in an area before he can move on. Most of these foes are easily exploitable. Gabriel’s push action – which is always active on the left hand – can stun almost every foe. If they get too close, just use push to daze them, and then unload magical blasts. This is how most of my battles unfolded. If long-range shots failed, I couldn't lose in the close-range game.

I never once fell during combat. I cheesed my way through most conflicts, and only came close to dying twice. The health regeneration system saved me from certain death in one of these moments. The experience I earned along the way only made the game easier, as I invested skill points into health and spell power.

At best, Fable: The Journey shows us that a first-person Fable game would be pretty damn cool…with a controller. This perspective works well for this world, its foes, and the cartoony art style. Even if you’re convinced you can live with unexpected Kinect malfunctions, the game itself doesn’t offer many thrills in any of its action sequences. It’s a cakewalk of a game that spends far too much time admiring its scenic sights from horseback. Now, if you’re looking for a horse and carriage simulator that periodically makes you feel like you’re drunk, run out and get it immediately. 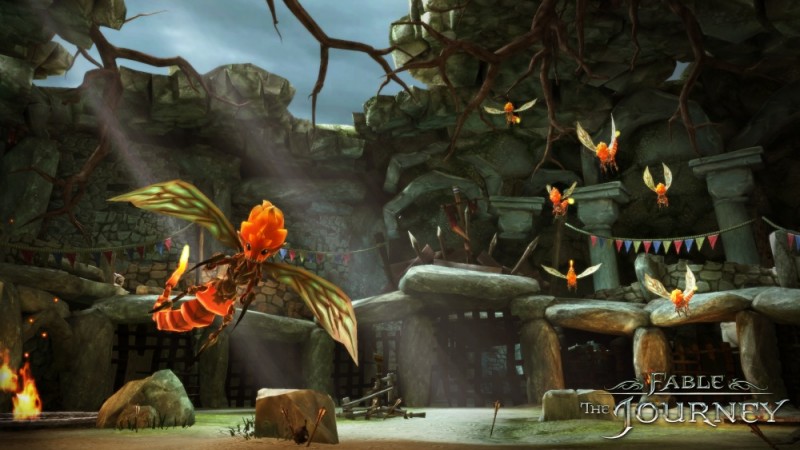 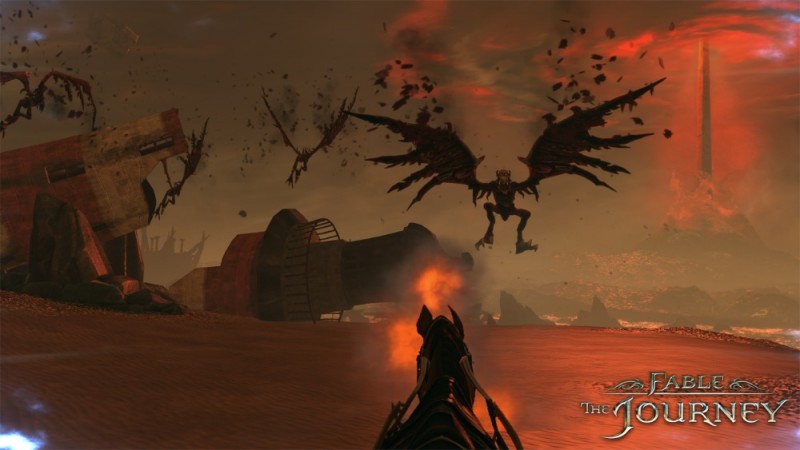 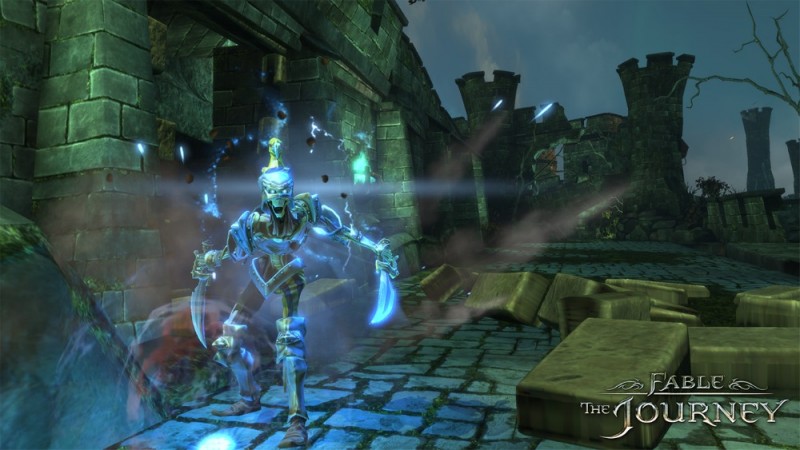 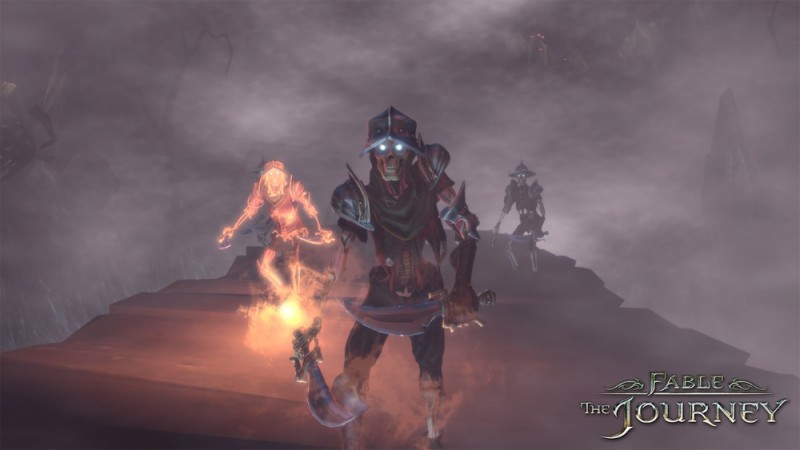 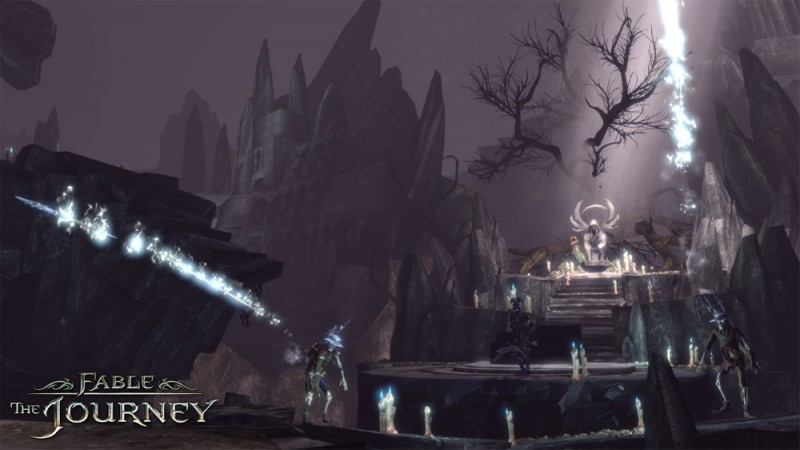 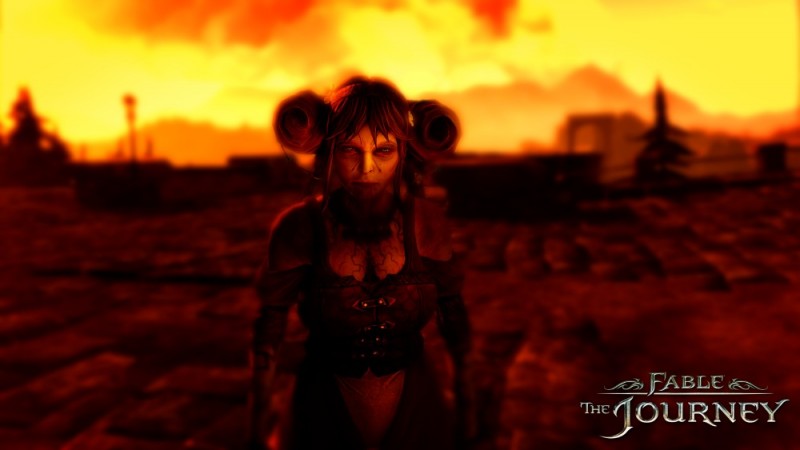 5
About Game Informer's review system
Concept
50 years have passed since the events in Fable III, and the heroes of Albion have lost the ability to consistently hit targets with magic
Graphics
The landscapes feature lush details, and Seren is animated beautifully. Gabriel’s character design is a headscratcher. Has Lionhead seen the Star Wars prequels?
Sound
Gabriel’s dialogue is cringe-worthy. The score and Theresa’s voicework are top notch, however
Playability
The thrust motion for magic casting doesn’t work as well as it needs to. To make matters worse, the horse sequences are uneventful and used way too often
Entertainment
More of a lesson in inconsistency than a game
Replay
Moderately Low 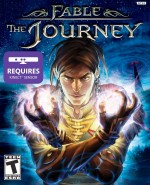