I found him in the slums of my hometown when he was just a pup...rescued him from a band of bullying orphans who thought it was funny to pick on a defenseless animal. He was my unwanted companion at first, and though we never spoke, something amazing happened during our travels; I actually started caring for him. I sacrificed random villagers at the Temple of Shadows, I cheated on my multiples wives, and virtually ignored my children, but I couldn't help but feel a certain protective ownership for my faithful companion.

It's interesting that the often mundane events like playing with your dog, buying up businesses and managing their profits (your shops actually make money when the game is off), or arranging the furniture within your house can be so compelling that the ''main'' story often takes a back seat. But this happens all the time in Fable II. What's also strange about this is that there is usually very little reward for your effort. Your wife might give you presents from time to time, for example, but there's really no persuasive reason to start a family. Your side life in Fable never intrudes on the main arc, but it helps the world of Albion feel all the more immersive. This is Fable II's most impressive feat.

You start out as an impressionable youth who--through fortune--crosses paths with the wrong man. Without revealing too much, your life quickly changes forever, and your epic story of vengeance and honor begins. While the narrative has its moments, it touches on many of the same beats as the first game and falls on its face at the end with an anticlimactic finale.

Fortunately, it's the hero's journey, not the hero's end, that makes this game worth playing. That path will have you rescuing slaves from a group of bandits, working your way through a gladiatorial-like ­crucible, and infiltrating your enemies' prison ­fortress in an elaborate rescue mission. The variety of trials you face is rich indeed, and though the story rarely ties back to the original game, there are a few nifty references for the fans.

Fable II boasts an impressive list of improvements. Instead of the bite-sized areas from the first game, the world now feels open and more worthy of exploring. In battle, you now gain bonus experience based on how well you perform, onscreen messages tell you when you can purchase that ability you're saving for, and you can even cash in old skills for some extra experience. On a whole, the combat system is more balanced, and all three combat options are equally viable, so eviscerating your enemies is entertaining no matter how you choose to do it.

Unfortunately, not everything is better this time around. While Fable II's online co-op sounded great on paper a year ago, its execution feels like a sorry rush job. Only the host gets to use their created character, and any friends who join the game will have to use presets. Even though you'll both share gold and experience, your friends won't be able to buy items, collect treasure, or wander very far. Your dreams of sneaking into your friend's world and destroying his hometown will have to stay dreams, because Fable II offers only limited interaction when exploring someone else's game.

At various points in the game you must perform side quests before proceeding with the story. While many of these quests are fun, some players will balk at running though the motions in order to progress the main plot. There aren't many boss battles to speak of, and the few larger encounters you find are copied and pasted throughout the game...be prepared to fight a few trolls. But one of my biggest gripes is that appearance options feel sadly limited. In a game that puts such importance on making your character your own, it's odd that there aren't more ways to alter how you look.

9.25
About Game Informer's review system
Concept
This sequel to one of the premier Xbox RPGs lets you control a character who ages and evolves based on your actions
Graphics
An amazing and colorful art design helps push this game forward
Sound
The game has a great score, but the voice work isn't particularly noteworthy
Playability
The three different combat styles feel a little more balanced with each other, but once you get powered up nothing offers much of a challenge
Entertainment
Even with its simple story and minor imperfections, it's easy to lose yourself for days in Fable's world
Replay
Moderate 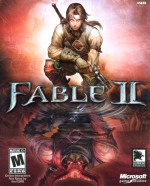