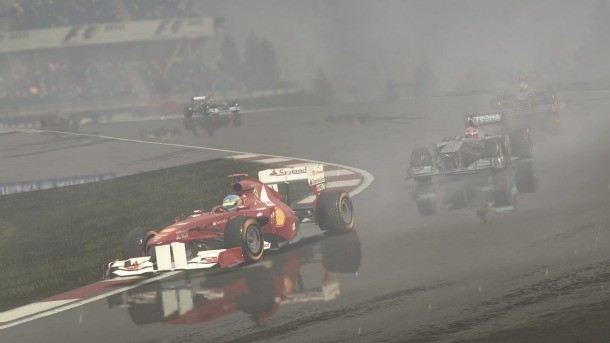 Codemasters’ stewardship of the F1 license has been good so far, and F1 2011 is perhaps an instance of the lauded racing publisher/developer learning that year-to-year franchises can be tricky. The game retains its core features from last year, and in the absence of any astounding leaps forward, it treads water with a sprinkling of additions.

F1 2011 takes a relatively subtle approach to upgrading its experience. For instance, the game fills out its previous multiplayer void by offering a full 24-car field with AI racers as well as adding a co-op feature whereby two people can race a season as teammates. These additions are definitely welcome, but the game as a whole doesn’t have a marquee or must-have feature. Thankfully, it has its solid driving to fall back on, and even for a sim-racer trying to mimic the pinnacle of racing, Codemasters doesn’t lose sight that it’s still a game that’s supposed to be fun for players. To this end, I like the different driving options available that let you tailor the difficulty to your liking, as well as the availability of flashbacks – which have become a staple in Codemasters’ titles as well as those from other companies.

Two new features aimed at helping drivers come, not from Codemasters, but from the real-life F1 circuit. DRS is a rear-wing system that can be used in practice, qualifying, and certain circumstances during a race, and KERS is a system that lets you activate a power boost based on energy stored up from your brakes. It all sounds almost too high tech to be true, but in the game, the results aren’t dramatic. You’re given a KERS boost once a lap, and you can activate it three or four times before it drains down, so it can be useful in some situations. Of course, given how hard-to-handle these F1 cars can be, you have to be careful in how you use it.

In its inaugural F1 title last year, Codemasters did a good job providing a structure for your career with teammates, tech upgrades, research objectives, and media interviews as ways to try and liven up the race-in-race-out schedule, but more is needed on this front that F1 2011 doesn’t deliver. All those previous elements are there, but this year’s title feels similar to the point where you start to wonder if all you’re getting are a few yearly updates and the new F1 tracks in India and Germany.

F1 2011 offers a fun driving experience and a welcome change to the traditional career schedule, but in the franchise’s second year running, it’s in need of a pit stop and some fresh tires. 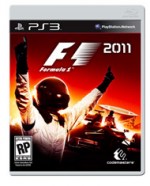 The game retains its core features from last year, and in the absence of any astounding leaps forward, it treads water with a sprinkling of additions.

Purchase More Info
8
i
Game Informer's Review System
Concept Flesh out the franchise’s multiplayer and offer a few concessions to the new F1 season
Graphics The game looks pretty sharp, particularly in the rain
Sound You get a decent amount of info about your car and the race from your crew
Playability The game provides a good range of driving assists, damage, weather, and other options to let you experience the game how you want
Entertainment Last year Codemasters built a good foundation, and this improves upon it only incrementally
Replay Moderately High