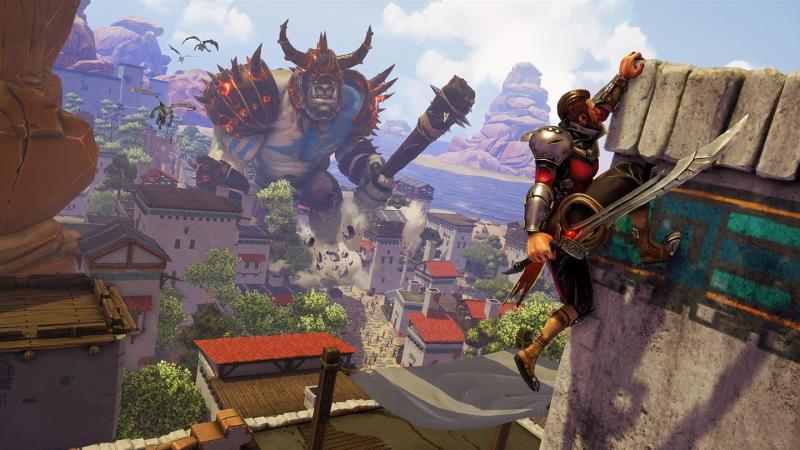 A sword in the hands of someone with an impressive vertical is all humanity needs to stave off annihilation from an army of 150-foot-tall giants. This ludicrous power fantasy is the driving force behind Iron Galaxy’s Extinction. Scrambling up a giant’s back to lop off its head delivers plenty of excitement at first, but the act loses appeal quickly, exposing an experience that clings too tightly to one note and fails to provide anything meaningful to engage with or explore.

Extinction’s story also loses its way after a fascinating start. The concept of a hero is just a fairy tale in this heavily policed world; humankind is at war with itself, sentencing many of its citizens to work (and die) in labor camps. When a dark legend awakens, civilization is quick to fall. Giant ogres, called Ravenii, suddenly appear, and humanity is woefully unprepared to defend itself. The player embodies this world’s version of a “chosen one,” a character named Avil. He is one of the few remaining Sentinels, a group of soldiers able to scurry up walls, bounce across treetops, and cut down anything with a magical sword. Avil is one of those fairy tales come to life – a character that you immediately want to get to know and control, even if his appearance is surprisingly mundane. 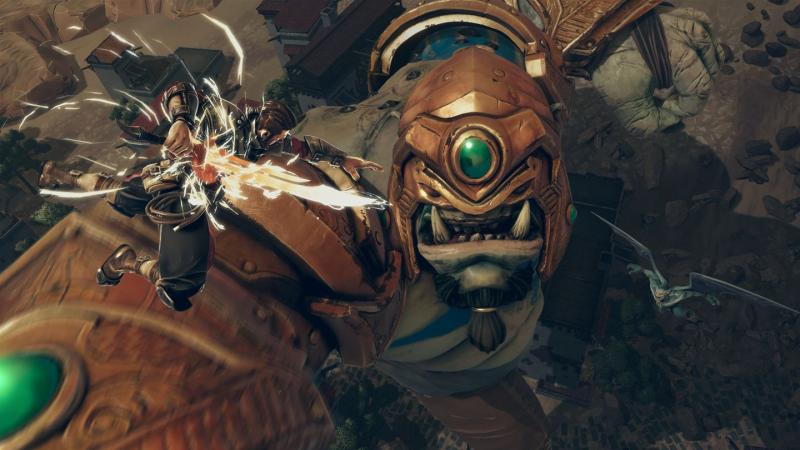 Sadly, the game does not give players much insight into Avil’s life other than loosely touching on a close relationship he developed with an orphan at camp. The overarching story is mostly told through short animated sequences, and even briefer “talking heads” conversations that are mostly used to detail the mission ahead. The plot ultimately goes nowhere until the final act, and even then, it doesn’t have much to latch onto other than predictable developments.

Avil’s super-human feats end up feeling pedestrian, given how they are all streamlined for one task. When a Ravenii magically teleports into a city, it immediately starts taking down buildings, either by swinging a comically large club or stomping them with its feet. As you make tracks to stop the titans, you can stop along the way to save civilians from smaller foes, but this task won’t help you much – you need to topple the giants before they destroy the city or its watchtowers. After completing a handful of missions, the feeling of unending repetition sinks in. 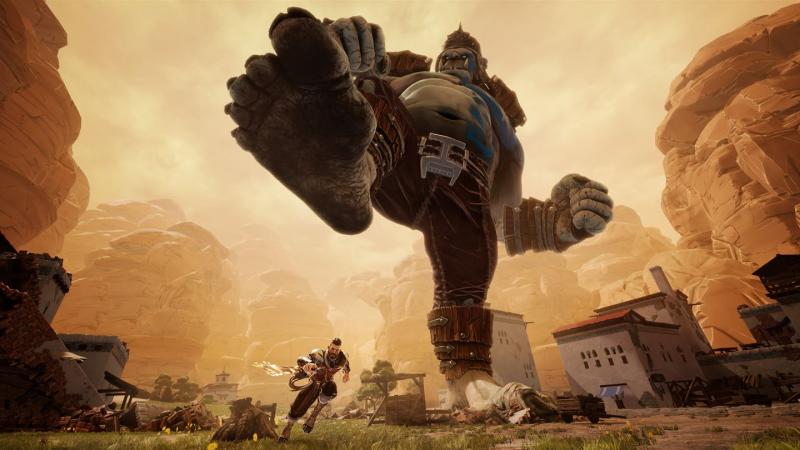 The Ravenii all fall the same way: You chop off their legs to drop them to their butts, climb onto their backs, and then take off their heads. You need to move quickly, however, as the giants regrow body parts after a few seconds. If you are too slow in your actions (or perish and respawn), that delay may give them enough time to rise again to continue their onslaught against the city – and they can destroy it quickly. As skilled as Avil is, he can’t perform a finishing blow (called a Rune Strike) until he fills up a special meter (by hacking off limbs, saving people, or defeating smaller foes). This is a strange requirement that just seems to be in place to prevent the player from repeating tactics to dominate.

If only one Ravenii is on the battlefield, you can continually chop off its regenerating legs to fill that meter. In one mission I was tasked with protecting the city for eight minutes. Only one Ravenii spawned, so I just hacked off his legs 54 times until the time was up. The easiest way to complete some missions is to cheese them. 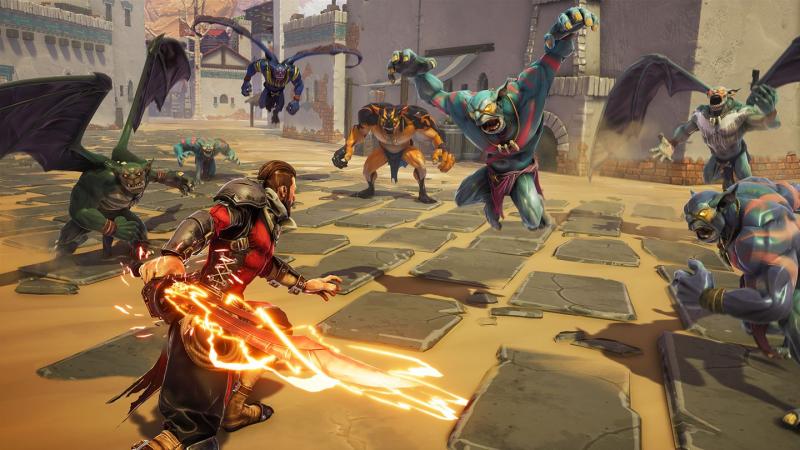 Even if you try to game the system, sloppy controls and unpredictable A.I. do you no favors in stopping the lumbering foes. Although the Rune Strike gives the player the benefit of slow motion for aiming, lining up a shot against a surprisingly animated Ravenii can be a hell of a time, given how much the camera is working against you. You sometimes need to leap off of a Ravenii’s back to target the front of their helmet. Performing this feat can be a nightmare that often ends with Avil dropping unsuccessfully to the ground. Just standing on the back of a foe can be problematic, as I would move in unintended directions, leading to the giant smashing me with a hand.

To make matters worse, some Ravenii wear spiked armor. If you collide with this armor, you die – and Avil's movements can be unpredictable, especially when near the beasts. The controls are frustrating and can turn a flawless run into failure if you mess up just once. Some of the missions are brutally difficult, and unfairly spike in difficulty when a tougher Ravenii spawns. Since each mission is randomly generated, you have no idea what to prepare for. One mission might seem impossible the first three times you take it on, yet a cakewalk on the fourth, just because a problematic foe didn’t appear.

The type of Ravenii you confront, the location, and side objectives are all randomized, and they don’t seem balanced for any particular spot in the game. In some missions, if a giant spawns with silver leg armor (which cannot be destroyed), I immediately restart the mission to get a better starting beast, as that one foe causes too much damage in the introductory moments. Again, I found a way to cheat the system.

Iron Galaxy clearly knew the game desperately needed variety by creating some levels that just push the player to save civilians without having to deal with giants, or take on a set number of smaller grunts. These missions don’t take much effort and only ask the player to engage in mundane hack-and-slash at most. These stages just feel like odd stopgaps that don’t serve much purpose, and they don’t make Extinction more interesting. After finishing any level, the player is rewarded SP that can be used to upgrade Avil's abilities. Sadly, the upgrade system doesn't expand the scope of the game in any way – it just makes it a little easier to succeed at certain tasks.

Technical issues also abound. Some respawns led to me appearing in the world and then dying immediately. I don’t know whether I was smashed to death in these moments, or if I was experiencing a glitch, but the time it took me to respawn meant the Ravenii continued destroying the village.

One look at Extinction’s artwork may conjure thoughts of Shadow of the Colossus and Attack on Titan. While attaining the scale of these games, it doesn’t succeed in delivering the awe factor of engaging a new giant. They all look the same and you know what you need to do to drop them. Extinction ends up being shallow, repetitive, frustrating, and little more. 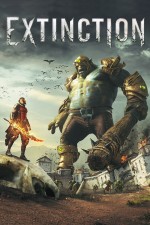 Extinction's David versus Goliath scenario grows old quickly and isn't backed up by anything else.

Purchase More Info
5.5
i
Game Informer's Review System
Concept Slay dozens of giants using one technique
Graphics The colorful art style mutes the incredible violence of dismembering giants. The aftermath of a battle disappoints, as the giant bodies vanish as soon as their heads are lost
Sound The somewhat haunting score fits the action nicely. The spoken dialogue is decent, but isn’t used frequently enough to build the narrative
Playability Superhuman actions are dulled by repetition and unexpected losses of control
Entertainment The David vs. Goliath angle starts out strong, but ends up recycling the concept over and over
Replay Moderate