I loved the blazing speed and big air of Monster Games' Wii launch title Excite Truck -- I just wanted some depth and a reason to keep coming back for more. Excitebots fills out Excite Truck's basic premise in predictable and gloriously unpredictable ways. Before inserting the disc, I would never have imagined kicking soccer balls, fishing, or making sandwiches in the service of racing faster and grabbing more stars. The surprises keep coming in this game, and so does the fun.

Players race world locations earning stars for everything from where you finish to drifting to getting air. Given the large number of opportunities to earn stars, the game smartly balances how many you need for the commensurate grade that determines if you move up the racing tiers. I can't tell you how many times I failed to get a passing grade because I left five or fewer stars on the table -- only to re-race a track and pick up the necessary stars or realize how lucky I had gotten the first time. While Excitebots relies on a bit of luck, you always feel capable of making a more star-studded run.

Getting enough stars is only a part of the story. How you get them is everything. Excitebots introduces a number of novel ways to pick up stars during a race. At first, you won't know why you just picked up a tambourine or a pie and what you're supposed to do with them, but it's all about earning more stars. Whether you're plucking the string of a high wire like a piano plonking out a tune or hitting a football through a pair of goalposts, this game never bores you. These ­activities are so well integrated into the normal flow of racing that it doesn't take long to adapt your thinking and racing lines to participate in them.

The loose and pivoty feeling of the bot vehicles, as well as the motion controls, could be improved. Which of the animal bots you select influences this loose feeling. I mainly stuck with the frog, as many of the other bots can be too squirrelly. The collision is also inconsistent, which means the vicinity in which you have to be to get some stars isn't always the same. Regardless, Excitebots won't slow you down. The game's thrilling racing continues in online and offline multiplayer, as well as in various standalone minigames and an impressive poker mode where you race around collecting and cashing in poker hands during a timed run. 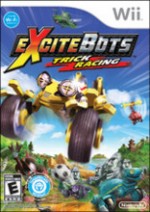 Excitebots: Trick Racing
8.5
i
Game Informer's Review System
Concept You spend as much time dealing with all the crazy goings on as you do racing. That's a good thing
Graphics Things haven't changed much from the first game, but I'll take the basic look given all the action onscreen
Sound I wanted to turn the sound off because the music was so bad, but I couldn't because the gameplay sound effects are useful
Playability The mid-air spins reveal an inconsistent and underdeveloped trick system, and the cars intentionally feel loose
Entertainment Whether it's the moment-to-moment racing or the feature set, Excitebots is a deeper and more satisfying experience than Excite Truck
Replay Moderately High