A boss fight is a cathartic moment, created to punctuate a game in a satisfying and memorable way. An unwinnable boss fight might seem like it would defeat that purpose, but the team at White Milk Games has taken that concept and made an entire game out of it. Endless Boss Fight is more fun that its name implies, with plenty of tension and small victories, but issues with execution keep it from living up to its promise.

The basic idea is simple: You are a robot, and you fight a bigger robot until you die. Your fists are your weapons, meaning you have to get close to dish out significant damage. The boss, however, has a wide array of missiles, lasers, buzzsaws, and other implements of doom. The battle is broken up into a series of rounds that increase in difficulty until you are defeated, at which point you start all over again. Even though the mechanics are different, the structure is similar to endless runners; you get as far as you can, and then try again. It’s addictive for a little while, but the fun wanes quickly.

For this formula to work, players need to have enough incentive to keep coming back. That’s where Endless Boss Fight struggles. Your rewards for individual runs are paltry, which means that you don’t progress at a satisfying rate. You earn normal and premium forms of currency (the game is free-to-play, after all). The premium currency (white milk coins) is used to buy the things you really want, like stat upgrades, but you accrue it at an agonizingly slow pace. This is especially problematic when you get further in and your upgrades get more expensive, putting a tedious grind in front of you with no worthwhile rewards along the way.

Complaints about the progression pale in comparison to the fact that Endless Boss Fight doesn’t control well. You have three different control options, but not of them give you the agility you need to reliably dodge or string together combos. Not only are you grinding with little payoff, but you’re also wrestling with your character’s clunky and unresponsive movement. It works on a basic level, but when the action gets hectic in more difficult rounds, the touchscreen controls can’t accommodate the actions you want/need to perform.

Amid all the problems, there is one shining feature in Endless Boss Fight: its battle arena with asynchronous multiplayer. Instead of going up against predictable tactics in each round (which is what happens in single-player), the battle arena pits you against automated, player-made variations of the boss in three-round bouts. Since players customize which weapons their bosses use each round, it’s exciting to encounter clever configurations, and adds needed variety to the combat. It also means that you get to customize your own boss for other people to face, selecting weapons and bonuses for it to use against opponents. You can also spend your white milk coins to upgrade its stats, which I found to be a better investment than powering up the hero. You boss’ performance passively wins you more white milk coins while you’re away, so it pays off better than grinding through single-player.

With a few tune-ups, Endless Boss Fight could be great. A more consistent and satisfying string of rewards would get me hooked, and better controls would alleviate my frequent frustration – all of which would give me even more reason to continue diving into the cool asynchronous multiplayer arena. Unfortunately, that’s not the game you get when you play Endless Boss Fight.

6
About Game Informer's review system
Concept
Fight a single boss in a series of timed bouts that get progressively harder
Graphics
I like the character designs on the hero and boss, but don’t expect a lot of visual variety
Sound
The music and sound effects get old quickly
Playability
Despite three different control schemes, your ability to maneuver is never where it needs to be
Entertainment
The slow progression and clunky controls make it hard to fully enjoy the cool ideas buried here
Replay
Moderately High 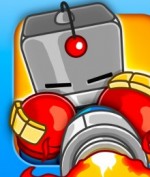