As much as I love Civilization, the turn-based strategy genre can use all the games it can get. Elemental holds great promise – its developer has some experience in the field with the critically acclaimed Galactic Civilizations II, it moves beyond the typical historical setting to embrace a Western fantasy setting, and it doesn't have decades of tradition preventing the designers from trying new things in an often-hidebound genre. As a fan of turn-based strategy, particularly empire-building 4X games, I wanted Elemental to kick ass. I’m disappointed with the shoddy mess that Stardock shipped, even if there is some hope for the game's future.

Elemental tells a story of a handful of magic-wielding channelers leading the races of Man and the Fallen in their methodical quests to reclaim mastery over a devastated wasteland. Starting with a single city and your channeler, players explore randomized maps for rare resources to exploit – the most potent being arable land – and new lands to settle. Heroes can dive into ancient ruins to face powerful monsters and find magical weapons. While you explore, your kingdom's scholars of lore and magic strive to uncover deeper secrets, from powerful demon-summoning incantations to more effective ways of organizing the peasantry. Leading your people to dominance over the new world order is a daunting task that requires a careful balance of military power, economic strength, and magical power. At least that’s the theory.

In practice, the dearest resource in Elemental is your patience. Can you slog through forum posts to find the information you need about the many details that aren't covered in the game or in the tiny manual? The many numbers conveying a unit's capabilities in battle are presented without context. Do you have the inner strength to slowly figure out what they mean through the minimal feedback the game gives you? Can you ignore the brainless antics of the AI opponents, who often seem to be groping in the dark as much as you are? Will the interface break your spirit with its countless display bugs and needlessly convoluted steps to perform common actions? The lack of information and unforgivable lack of polish aren’t Elemental's only major problems. The combat system is, to put it kindly, broken. Depending on where you and your opponents are in the technology and spell research trees, something or other will be useless. Regular units are helpless against magic spells in the early game, while summoned dragons and devils are a footnote to endgame conflicts since they're rolled over by companies of steel-clad knights. Combining pieces of armor with weapons and ancillary equipment to create unique units is a cool feature, but none of your decisions there matter. Throwing the best weapons and armor you have on a dude and shoving him out the door is the optimal decision nearly 100 percent of the time. Combat is won and lost by the random number generator far more often than good strategy thanks to the enormous damage variance. Even Sun Tzu couldn't overcome poor damage rolls that have identical units doing between 1 and 15 points of damage, especially when health pools are between 5 and 15.

Elemental has a great feature list, of which unit customization is just the start. Diplomacy incorporates an abstract "diplomatic capital" number, quantifying a previously nebulous concept that is nonetheless central to real-life negotiations. Tactical combat lets you battle it out wargame-style, commanding the forces you've painstakingly assembled on the battlefield. Research is approached in a novel way, where each subsequent advance in a field is more expensive to research but you can pick them up in the order you choose. The Adventuring tech tree in particular is brilliant; it perfectly fits the concept of rebuilding civilization from the shattered remnants of the ancients by revealing new resources for your cities to harvest as well as additional quest locations for your heroes to explore. These are great ideas taken individually, but Elemental fails to bind them together into a cohesive game.

My intense 4X fandom has been conquered by Elemental's nonstop irritations. I'm putting it down for now, but I'm not writing the game off forever. Galactic Civilizations II and the Ironclad-developed Sins of a Solar Empire both demonstrated that Stardock often supports its games after release with free new content, and Elemental’s first week alone featured multiple helpful patches. I dig the game’s vibe and want nothing more than to lose myself in building fantasy kingdoms. Maybe a few months of patches will get the game to a state where I can do that, but for now I'm not recommending this to Civilization nerds, much less strategy-curious gamers.

[The above text refers to the currently available 1.06 version of the game. If you're looking for a review of the unpatched version that shipped on disc, it's right here: "Terrible. Do not play under any circumstances. Patch immediately."] 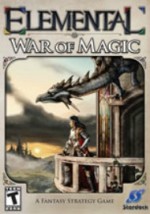 I’m disappointed with the shoddy mess that Stardock shipped, even if there is some hope for the game's future.

Purchase More Info
6.5
i
Game Informer's Review System
Concept Revive fantasy turn-based 4X with a fresh take on the genre…then release it several months before it's ready for primetime
Graphics The watercolor-esque art style doesn't bother me, but the inexplicably awful performance that forces me to turn shadows off to avoid a slideshow does
Sound If you're going to have units say something every time you select them, you have to include enough audio samples to not make me turn the sound off within a few hours
Playability Navigating the often clunky interface isn't made any easier by malfunctioning keyboard shortcuts. It's far too difficult to see kingdom-level information at a glance as well
Entertainment There's a good, if not great, game buried in here somewhere, but even the hardest-core strategy nerds should wait for a few more patches
Replay Moderately High