Tying world-rending magic, customizable units, tactical battles, army-decimating heroes, godlike ancient beings who guard artifacts of unimaginable power, and more together within a Civilization-like framework has been a pipe dream for gamers of my ilk for years. Steve Barcia’s landmark 1994 opus Master of Magic planted the seeds nearly two decades ago when it defined the high fantasy empire-builder sub-subgenre, but its horrendous AI and total lack of balancing would never fly today. Still, that title had a powerful effect on the development of many gamers, myself included, and a number of attempts to recapture its magic have been made over the years. Elemental: Fallen Enchantress (itself a reworking of Stardock’s 2010 disaster Elemental: War of Magic) checks off all the features that gamers like me have been longing after for nearly two decades. It includes a few intriguing new ideas of its own, and ultimately delivers on most fronts despite lacking the soul that defines true greatness.

The aftermath of an apocalyptic war has left the kingdoms of men and empires of demi-human Fallen in shambles. As one of the very few magic-capable channelers left who can harness the power of mystical elemental shards, your task is to found a nation and return civilization to the world through the light of enlightenment, at the point of your spears, or a mix of both. The sandbox this all goes down in is best enjoyed courtesy of the excellent random map generator, though a handful of prefab layouts are available – as is a world builder for creating and sharing your own designs.

Choosing one of the default factions and sovereigns or designing one of your own from the grab bag of abilities available has an enormous effect on a playthrough. Fascinating, distinct powers make every faction a unique experience and a joy to experiment with. Evil slave lords can train cheap, maintenance-free thrall units whose weaknesses in combat can be more than offset by infusing them with powerful death magic that corrupt and kill the poor souls – but that’s why they’re cheap to train. Magically talented enchanters can build up magnificent cities whose output dwarfs those of lesser civilizations, but require enormous investments in infrastructure. Twisted, sorcerous demi-humans with occult ties to the darker side of magic can siphon off the power of shards found in the world into bound elemental servants to fight for them in battle.

In any case, you move through the same three loosely defined phases that comprise most 4X games. Settling new cities is of paramount importance early on to expand your empire’s influence and production capabilities, while battling neutral monsters for experience and loot bolsters your sovereign and other hero units. Once you’ve snapped up all the nearby city sites, you’re faced with the classic guns-or-butter choice: Invest in more military strength now in the hopes that you can use it to conquer more territory, or build up infrastructure to have stronger research/magic/production available in the future. All the while, you’re progressing down the tech trees for civilization, warfare, and magic from clubs and spears to dragon allies and platemail. Eventually you will make a play or be forced into trying for one of the victory conditions, either wiping out your rival factions through conquest, uniting them via diplomacy, casting the research-intensive Spell of Making, or completing the Master Quest and winning through your heroes’ adventuring prowess.

These phases are familiar to any strategy gamer, but have interesting twists sprinkled throughout. Population growth is set by your faction’s overall prestige and divided among your cities, so having fewer settlements means your cities grow and level up faster, gaining access to powerful abilities like multiplicative production bonuses or special perks for any unit trained there. Improvements like markets and workshops have dramatic effects on a city’s capabilities, but they’re expertly designed and balanced to make each build order an interesting choice – you almost always need three or four things from a city and can only build one at a time, so choose wisely. Leveling up heroes presents tough tradeoffs between defense, offense, utility, and more. Outfitting them with the vast variety of equipment on offer is an intriguing vector for hero development, as well. Monster lairs in the wilderness present opportunities for adventuring heroes strong enough to clear them, but their guardian armies break loose and start roaming freely if their lair is enveloped by your borders. Setting a dragon loose is a steep and often foolish price to pay for settling a prime city site.

Unlike most 4X titles, Fallen Enchantress has very few city sites available for settling. Rather than consuming all the land around your capital until you run into another faction, you have to scout the wilderness (which means surviving the monsters and bandits that infest it) to find suitable locations. As your armies grow in strength, you are be able to clear out more territory and at least gain access to its strategic resources by building border-extending outposts, but taming the wilds is a big part of the early game. This has the side effect of dampening early tension and conflict with rival factions as neutrals typically impede any possible attack routes, which is a mixed bag – being left alone to develop in peace is nice and all, but losing the urgency of a possibly hostile neighbor reduces dramatic tension. Wild Lands controlled by powerful neutral armies like ancient war golems or immortal elemental lords take up huge portions of the map, ready to crush any army that wanders in unprepared. The monsters occasionally send out raiding parties, which will happily raze outlying resources and even burn undefended cities to the ground. The rich territory of a Wild Land becomes available for settling if you can defeat its lord, but a playthrough rarely goes long enough to make diverting the necessary armed strength worthwhile. At that point in the game you’re likely conquering your rivals or defending against them doing unto you, and opening up new land to settle with fresh cities that will require dozens of turns of buildup to become useful is typically a low priority. Even if you never invade a Wild Land, though, they add much-needed flavor to the world.

The action cuts to simple turn-based tactical battles when enemies collide on the strategic map. Most last only a handful of turns thanks to the small map sizes and deadly combat. With little room for tactical creativity, the battles are more of a chance to see the units you’ve designed and heroes you’ve customized in action than a whole second side of the game. Seeing big damage numbers pop up is fine in its own right, but the presentation is minimal to a fault; shining knights crashing into lines of hammer-wielding demi-human infantry has all the spectacle of voicing clanging noises while making your Ninja Turtles action figures duel. Spells are at least smartly designed to be expensive and difficult to cast but dramatically impact the battlefield, and many higher-end monsters have interesting, unique capabilities that present new challenges.

The combat math that describes how battles play out is Fallen Enchantress’s biggest problem. Thanks to a variety of factors like high defense generally trumping powerful offense, small unit counts, and huge veterancy bonuses for experienced units, the game strongly favors smaller numbers of more expensive, elite units. A single stack consisting of a few powerful heroes supported by high-end trained or summoned units can tear through wave after wave of moderately strong mid-range stacks, suffering little attrition along the way. The AI is unaware of this fundamental truth despite its otherwise competent play in developing empires and conducting wars and diplomacy, to the point where I have conquered multiple enemy empires from start to finish with a single strong army that my rivals never concentrated enough force on to defeat. For all that Fallen Enchantress ticks off a long list of boxes that I’ve wanted in a 4X for years, it does so with little soul. I dig the setting’s post-apocalyptic vibe, but beyond that the world feels like a paint-by-numbers collection of post-Tolkien fantasy tropes. None of the races capture my imagination like Master of Magic’s insectoid klackons or cruel draconians. I applaud the attempt to include some role-playing flavor via lengthy text descriptions of quest stages, but their quality ranges from passable to awful – and they still have all the disadvantages of being simple walls of text. The included story campaign is not worth playing, as it almost entirely ditches the empire-building aspect of the game in favor of a linear tale told through the worst writing found in the whole package and a risk-free romp through easy monsters with a single overpowered hero stack.

I like Fallen Enchantress. It’s the closest anyone has come to producing the game I’ve been dreaming about since I was an adolescent with visions of wizards carving fantastical empires out of a hostile world. But as much as I feel like I should be head-over-heels in love with it, my 50-plus hours with the game leave me satisfied rather than ecstatic. Maybe some enterprising modder will use the included tools to expand on the base game’s good parts while mitigating its issues and add a little soul to the mix. I’ll gladly dump another 50 hours into Fallen Enchantress on that blessed day. 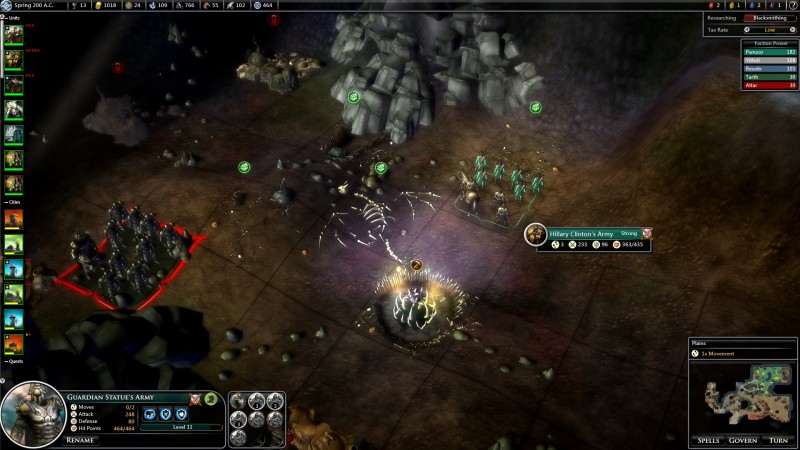 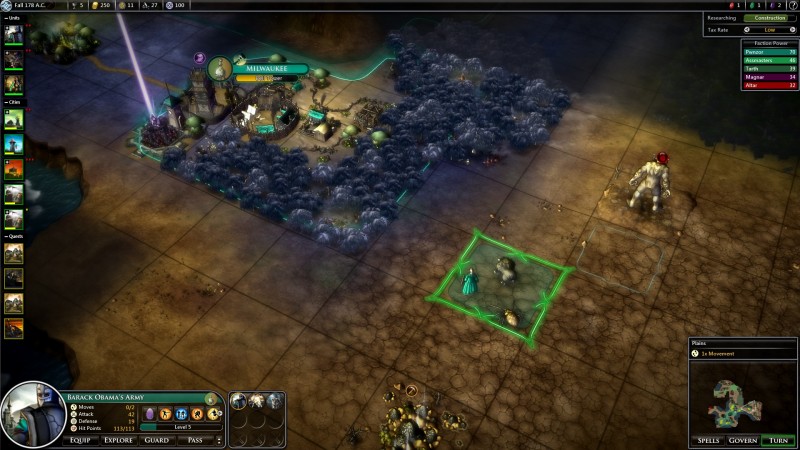 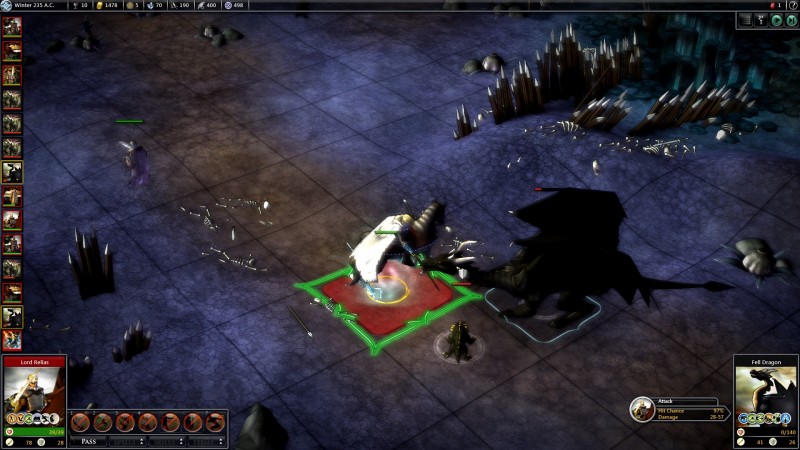 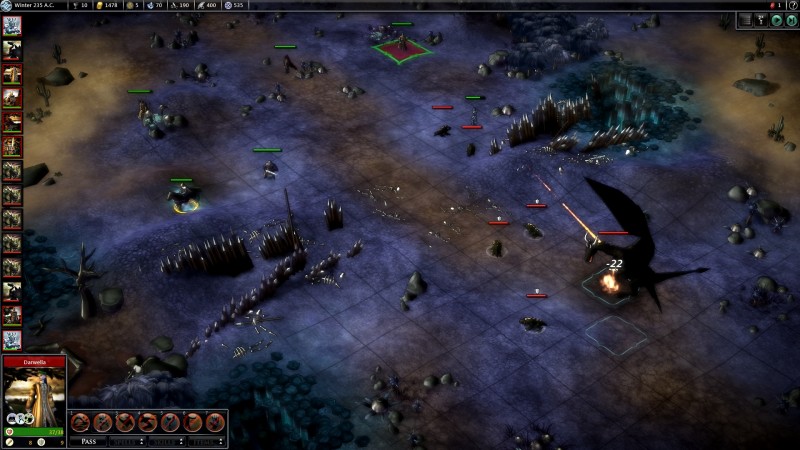 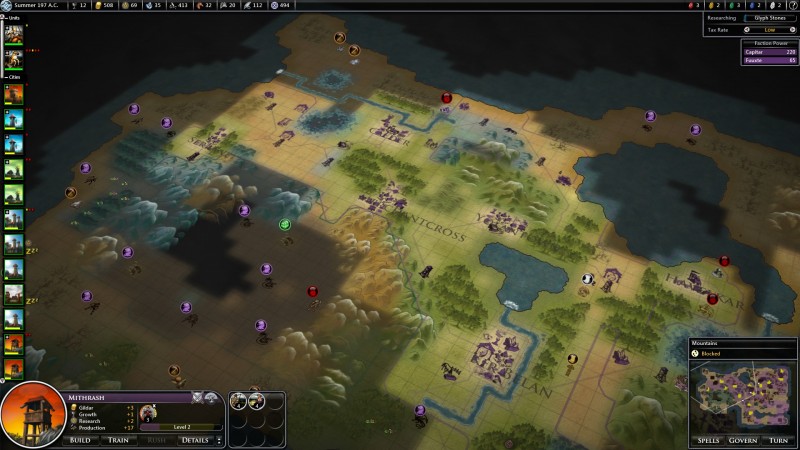 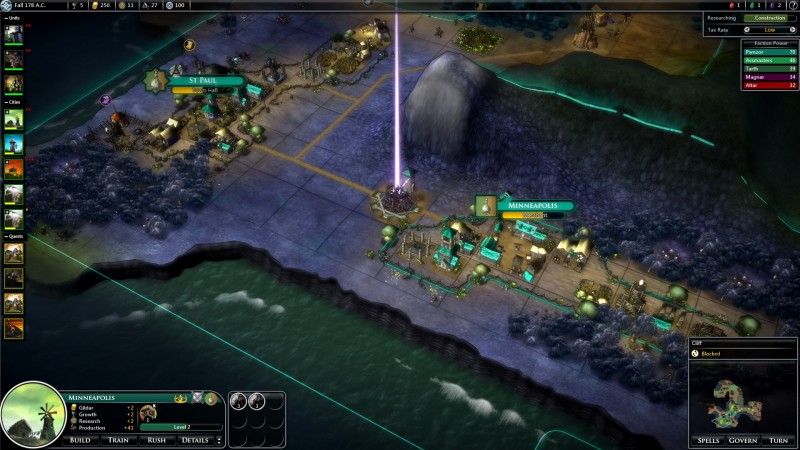 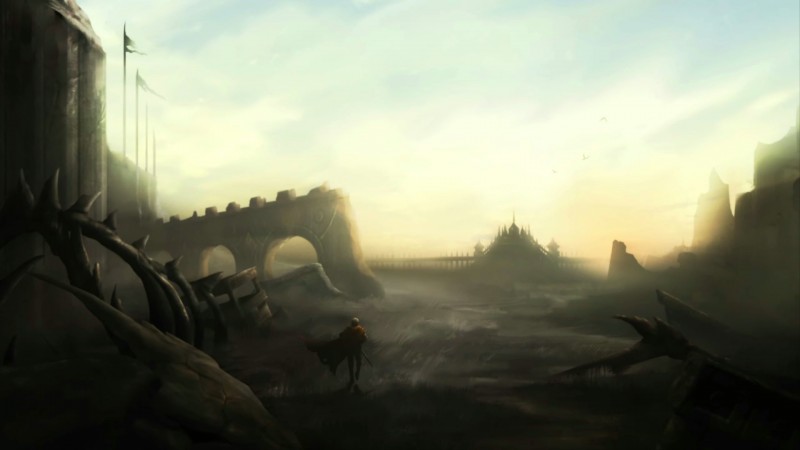 8.25
About Game Informer's review system
Concept
Build an empire of magic en route to conquering the world through heroic deeds, economic might, or regular ol’ conquest
Graphics
The watercolor art style works well from a birds-eye view, but breaks down into an ugly, blurry mess at closer zoom levels
Sound
The score is fine, but nowhere near diverse enough to hold up for more than a single campaign. Effects are disappointingly minimal in battle
Playability
The interface is inconsistent. Most common tasks and critical information are presented clearly, front and center. Some are bafflingly buried behind tooltips or drill-down menus
Entertainment
This is the best fantasy empire game since the Civilization mod Fall from Heaven – not-so-coincidentally from the same lead designer – but it’s not like there’s much competition for the title
Replay
Moderately High