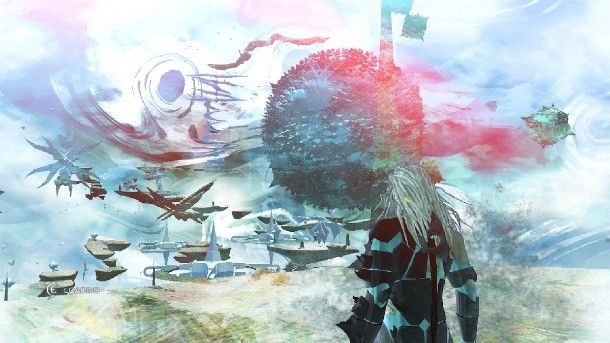 I’ve never taken hallucinogenic drugs, but after playing El Shaddai: Ascension of the Metatron, I may be able to relate with people who have. I traversed colorful landscapes with melting skylines, ascended seemingly endless staircases, battled an angel who tried to seduce me with dance, leapt over a happy humanoid hot dog on a beach ball, and overheard the Devil gabbing on a cell phone with God Almighty. I often felt like I was immersed in the dreams and nightmares of a contemporary artist who had just fallen asleep after reading The Bible. It was a weird and unrestrained journey, but one that stands as a stunning work of art. El Shaddai is a visually arresting experience I wholeheartedly loved.

This odd pilgrimage is the brainchild of Takeyasu Sawaki, previously known for his character work on Capcom’s Okami and Devil May Cry. Sawaki and his team at Ignition Entertainment didn’t just create an art piece. El Shaddai’s striking visual style blends beautifully with a fascinating story based on the Book of Enoch, a religious work that follows the great-grandfather of Noah. In the game, Enoch must round up angels who, through their fascination with humans, have abandoned Heaven for Earth. If Enoch fails his mission, the Heavenly Council will unleash a great flood to purify the land.

Returning the angels is no easy task. They are holed up in a magical tower where every floor is its own visually unique reality – places Sawaki and crew successfully paint to be wondrous, weird, moving, and occasionally beyond human understanding. The art direction doesn’t stick to an Old Testament script; like a series of independent art exhibits, it jumps between a surrealistic version of Tron, a children’s storybook, and other striking styles. Few games achieve such a feeling of walking into a new plane of existence.

The story and world unite to create a unique backdrop for gameplay that any self-respecting gamer can pick up and play within seconds. That’s not to say it is easy, but it is composed of familiar mechanics. Half of the action involves arena-based combat, where Enoch takes on three or four enemies at once. All of Enoch’s attacks are handled with one button, and while this may sound like it limits your options, I was surprised how many different combos I could chain together. The combos are tied to timing; if you initiate a strike in the middle of an attack animation, Enoch might respond with another quick slash. If you strike at the end of an attack, Enoch may launch his foe into the air or deliver an overhead strike. This system has a satisfying rhythm that fits nicely with all three of Enoch’s weapons: the arch (a bowed blade), the gale (a large ring that shoots darts), and the veil (a circular Captain America-like shield that splits into two powerful gauntlets). Each weapon has its own timing and combos to master, and additional strategy is tied to purifying the weapons and calling on Uriel, a heavenly figure who augments Enoch’s attacks.

Keeping with the game’s strange vibe, enemy damage is displayed through their armor and clothing. You’ll know they are close to defeat when they are nearly naked. The same goes for Enoch. A large portion of this game is spent watching scantily clad men who look like Gap models.

Different enemy types and bosses are scattered throughout stages, but the true variety comes from platforming. The colorful vistas Enoch traverses are loaded with chasms and moving land. Thanks to a nicely designed jump mechanic and camera tracking that does a great job of framing each jump opportunity, Enoch can bound across dangerous paths and up shifting towers with speed and grace. When the arch weapon is equipped, he also gains the ability to float at the end of his jump, a technique that I found cheapens the difficulty in a game that is already far too liberal in its checkpoints (usually the platform you fell from, or in close proximity to it). The platforming is a nice diversion, but most of the thrills in these sections are tied to crazy environment designs and not the gameplay.

Each chapter of the game is as linear as can be. A few collectible items and hidden levels are tucked off to the sides, but the majority of Enoch’s time is spent heading in one direction that is free of puzzles, locked doors, or any activities outside of fighting, leaping, and listening to shirtless men talk. The environments are beautiful, but I wish there would have been more reasons to explore them further.

When the credits began to roll, I felt like I traveled to the Guggenheim with Charlie Kaufman on one arm and Timothy Leary on the other. Although the story delivers a cohesive narrative arc, the singular tangential moments of peculiarity, abstract level design, and well-crafted combat are the main attractions. El Shaddai is a rare treat of a game and a celebration of video games as an art form.

I’ve never taken hallucinogenic drugs, but after playing El Shaddai:
Ascension of the Metatron, I may be able to relate with people who have.

Purchase More Info
9
i
Game Informer's Review System
Concept A colorful adaptation of a lost religious story about a man’s remarkable journey to capture fallen angels
Graphics One of the most visually unique games ever made; each level appears to be stripped from a canvas in a museum of modern art
Sound A quirky soundtrack matches the kaleidoscopic visuals, and talented voice actors bring the story’s angelic figures to life
Playability The one-button combat system hides surprising depth. Platforming segments are precise yet unchallenging
Entertainment A lengthy story compounded by new game , additional difficulties, and the option to chase high scores
Replay Moderate