Humor covers a multitude of sins. As any comedy club owner knows, if you keep the crowd laughing they won't notice the watered down drinks. Eat Lead is aware of this phenomenon as well, as it comes out of the gate with a strong opening set and sprinkles in a good joke every time the audience gets restless. But the gameplay itself is as diluted as a happy hour special in an 18-and-over club.

Set in a fictional video game realm, players fill the shoes of Matt Hazard, a washed up action hero who thinks his stupid catch phrase still holds some cachet. After a few years outside of the limelight Hazard is making a comeback, but not everyone is fond of Hazard or his extensive gameography. A shadowy figure has hacked into the code in an attempt to kill our hero. This mysterious puppetmaster works from behind the scenes, altering all of Hazard's levels, creating a mishmash of crazy environments. For example, after Hazard takes down a few cowboys, he makes his way through the swinging doors of an old west saloon only to emerge into the glitz and flash of slot machines as construction workers and white-clad soviet soldiers attack from all sides.

Eat Lead has no qualms about making fun of itself; it takes a virtual wrecking ball to the fourth wall and never lets you forget you're playing a game. Matt Hazard has an extensive history in almost every genre, and it all comes back to haunt him. He uses super soakers from his kid-friendly water gun title as deadly weapons, he drop kicks slowly moving zombies who rise from the grave of his single arcade outing, and he protects a William Shatner sound-alike wizard who teleports in from some odd fantasy adventure. Hazard even spouts off wonderfully terrible one-liners like ''Don't lose your head – oh too late.'' Watching what this game will do next is almost worth the price of admission.

Sadly, if you take off Eat Lead's charming veneer you wind up with nothing more than a sub-par, straightforward shooter. Each level is little more than a shooting gallery with enemies who head straight for you or sprint across the room before taking cover. The aim assist – if there is one – doesn't do its job, so you have to be dead on with all your shots. Your reticle also moves every time you peak out of cover, making it hard to keep a lock on your target.

To add ugly insult to injury, the game's animation looks sloppy, and it has the graphics to match. I'd like to think the game was made intentionally bad to complement the hokey story, but that's just a cop out. A clever story should never excuse weak gameplay. 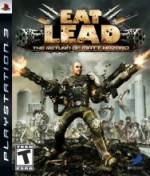 Eat Lead: Return of Matt Hazard
7
i
Game Informer's Review System
Concept A by-the-numbers shooter that apes nearly every video game convention in the book
Graphics Bland and flat. I wish someone could hack into Vicious Cycle's art department and add some more detail
Sound The game uses a wide range of generic musical styles, making you wonder if Vicious Cycle used a stock soundtrack
Playability This would be an average shooter if it weren't for a few annoying technical issues
Entertainment You'll laugh when you see the opening scene, then cry after seeing the potential this title squanders
Replay Moderately low