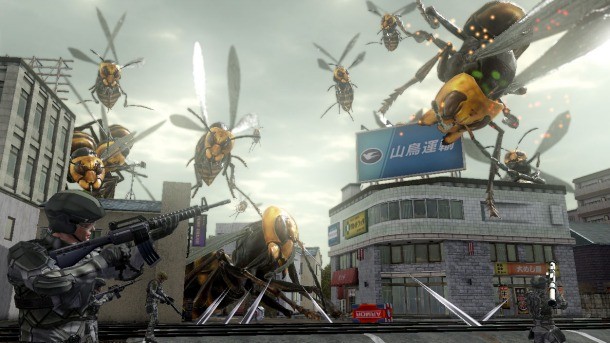 You don’t need to look far to find a video game with futuristic soldiers blasting aliens with high-tech gear. Earth Defense Force 2025 seems to fit in with this crowd, with its giant insects and ridiculous lasers, but Sandlot’s series stands apart. It may not be as polished or balanced as Gears of War or Killzone, but Earth Defense Force 2025 is full of gleeful carnage and B-movie charm that make it hard to put down.

If you’re familiar with Earth Defense Force 2017 (or Earth Defense Force: Insect Armageddon, to a lesser extent), you know what to expect. The Ravagers – an invading army of enormous bugs and robots – have descended on the planet, and you need to shoot them. The skirmishes aren’t long; most of them take 10 minutes or less, and your objective for most of the 80-plus missions is “kill everything that moves.” This simplicity serves the action perfectly, making it easy for you to hit the battlefield and start pulling the trigger.

Your goal may be straightforward, but EDF 2025 has some surprising depth. Strategy and careful weapon selection are critical in later missions, and four different classes – each with a massive and unique cache of weapons to collect – give you a lot of possible paths to victory. The Wing Diver, with her jetpack-enhanced mobility, is my favorite of the bunch, but all of the classes are worth experimenting with. I found the Fencer and Air Raider to be better suited to support rather than solo play, but you need to try everything if you want to collect all of the weapons, since you only earn new gear and health for the class you're currently playing.

I loved sifting through my newly collected weapons between missions, then testing them out to separate the good from the hilariously terrible. This level of freedom adds to the fun, but it is still far from a tactics-focused experience. The bad guys come out you in writhing swarms, and you blast them as efficiently as possible. It’s pure popcorn action – you just have more ways to wreak havoc.

All of this is best enjoyed as a team, in theory. With split-screen and online options, you’re able to play with your fellow EDF soldiers…but it makes the framerate take a dive. In the middle of the chaos, you are bound to notice some other technical shortcomings. The graphics, collision, and animations aren’t up to modern standards, but they usually don’t have a negative effect on the action. The occasional hiccup makes you feel more like you’re controlling a low-budget sci-fi movie, though some gamers might not find the errors as charming as I do.

The bottom line is that EDF 2025 is just plain fun. It has a clueless earnestness in the mission explanations and the exchanges between your fellow soldiers, and the combat delivers concentrated and accessible action. You can find more ambitious sci-fi shooters out there, but you won’t find anything else that captures EDF 2025’s delightful mixture of action and atmosphere. 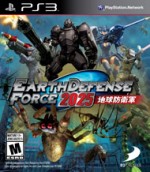 Sandlot's sci-fi shooter is full of gleeful carnage and B-movie charm that make it hard to put down.

Purchase More Info
8
i
Game Informer's Review System
Concept The EDF redeploys to save humanity from yet another invasion
Graphics It looks as good as it needs to, though the visuals aren’t mind-blowing
Sound I lost it when my fellow EDF soldiers burst into song mid-mission
Playability Each class has a slightly different control scheme, but none of the basic actions are difficult to master
Entertainment Killing Ravagers is fun, and collecting new weapons and experimenting with the classes keep you coming back
Replay Moderately High