A Beautiful Strategic Design Viewed Through A Flawed Lens
by Adam Biessener on Apr 29, 2013 at 01:41 PM This indie strategy title exemplifies both why I love strategy games so much and why many of my favorite titles will never gain mainstream acceptance. Eador: Masters of the Broken World has an adamantium skeleton of a gorgeous design buried under the pasty, unappealing flesh of poor technical execution.

As an immortal Master, your goal is to conquer the shards of land that float in the chaotic void until you control enough to piece together a world of your own. This metagame forms a fine narrative framework for assaulting a series of randomly generated 4X maps. On each, you hire heroes and armies for them to lead, build up your stronghold and outlying provinces, and dominate the shard through magical and martial force.

Each hero has the potential to wield godlike power, but achieving that status requires extensive adventuring. The provinces that make up a shard are full of ancient ruins, dank crypts, and other locations filled with hostile monsters. Clearing these lairs is often more important than conquering new lands, as the treasures they hold fuel your war machine with powerful items and large influxes of cash and experience.

These dens of evil play a role in the extensive random event system as well. Text-narrated events pop up regularly, often taking players on a choose-your-own-adventure vignette with randomized outcomes that can help or harm their empires. Giant slugs could start breeding ferociously, causing havoc and terrifying your populace until you can clear the lair (or shell out the cash to hire a team of adventurers). Corrupt officials can get you a nice influx of bribe money if you’re willing to take the karmic hit, which has a subtle influence on many game systems. The Inquisition could land on your shores, liberating your provinces and uniting them under its watchful gaze. These events can be a royal pain in the neck, but they also add a delightful narrative element and shake up the flow with much-needed randomness.

Battles take place on the tactical map, where the immaculately balanced combat requires serious thought to prevail. Every seemingly tiny detail matters, from the terrain to units’ special abilities and the individual promotions of each troop or monster. Simply charging into melee is usually a quick death; using magic to drain enemies’ stamina before you pick off their tired fighters with numerically inferior forces is what passes for baseline strategy, and it only gets more intricate from there. Eventually your armies will clash with rival lords and Masters, and the AI does not disappoint. Computer-controlled opponents make few missteps in combat, expand aggressively, and develop their holdings nearly as well as a human player. If the AI cheats (outside of the economic bonuses at higher difficulty levels), it’s hidden well.

Unfortunately, the AI regularly ends up winning by default simply by lasting long enough to make the human player quit in frustration at the technical problems. I’ve had enemy heroes show up with insane, obviously bugged stats that render them nearly invincible. I’ve had heroes die for no reason between turns. Turns on larger shards can take upwards of a minute to process, more than doubling the already-serious time investment Eador requires.

The interface itself is a mess. No consistent paradigm for right- and left-clicking exists. Critical menus that you interact with hundreds of times per shard disappear if your mouse pointer leaves their borders, which happens constantly because the controls you need to click on are right up against their edges. The stronghold building interface – which you likely look at every single turn – is wholly unusable in its default state and only workable at all once you click into the hideous “advanced” mode, which you must do every time you enter it. Hours of practice with its foibles can make the interface navigable, but no amount of time and effort can keep it from being frustrating.

Multiplayer unsurprisingly has its share of bugs as well, but Eador is such a slow game to begin with that I can’t imagine the levels of patience required to play much multiplayer in the first place. The barebones implementation here does nothing to address the issue of pacing or downtime, and so I can’t recommend it.

Eador’s problems are disappointing. This is a remake of Eador: Genesis, which is basically a one-man project from 2009 with primitive graphics and a simple-but-functional interface. The design is largely unchanged, but the small tweaks like faster progression through the campaign and unique rules for each shard are welcome. The improved presentation and small improvements to the gameplay are nearly overshadowed by technical problems, though. As encouraged as I am by the patches Snowbird has already released for Masters of the Broken World (it was much worse when it first launched), and as much as I adore the ideas it is built on, my recommendation has to come with serious caveats. Despite its often-disastrous implementation, Eador’s design is worth your time – a testament to its strength.

8.25
About Game Informer's review system
Concept
Combine adventure and role-playing ideas with tactical battles to make one of the largest, most epic strategy designs in the business
Graphics
Landscapes are pretty and the units look cool, but animations are horrendously slow and don’t line up very well
Sound
The minimal sound design is hardly noticeable
Playability
The interface is terrible in almost all respects, which is particularly damning for an intricate strategy game
Entertainment
If you can forgive its many flaws, the elegant design is unrivaled in its ability to create complex strategic and tactical problems from simple ruleset
Replay
High 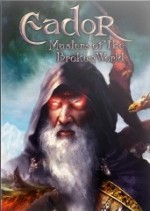 Eador: Masters of the Broken World