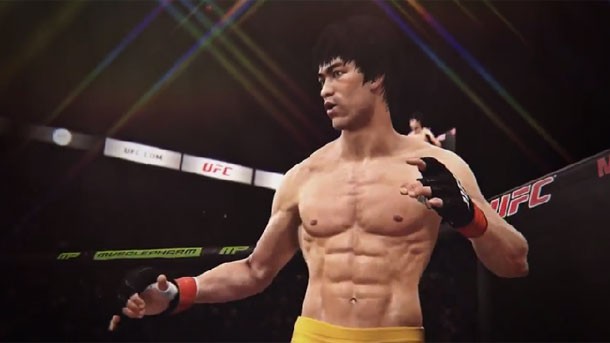 EA has released a couple of new details for its upcoming game EA Sports UFC, including a June release date and word that players will be able to enter the ring as martial-arts legend Bruce Lee.

Bruce Lee can be accessed in a couple of different ways. He becomes unlocked after you beat the game on the pro difficulty setting or higher, at which point you can enter him in matches in the flyweight, bantamweight, featherweight, and lightweight divisions. If you're impatient, you can also preorder the game from participating retailers and have immediate access to Lee when the game arrives on PlayStation 4 and Xbox One on June 17.

“I am so excited about this opportunity to bring my father back to videogames!” says Shannon Lee, Bruce Lee’s daughter, CEO of Bruce Lee, LLC and Chairperson of the Bruce Lee Foundation. “I’m thrilled that fans can now interact with him in a new way. The EA Sports UFC development team has been incredible to work with, and they've done a great job capturing the look and feel of my father. I think people will love getting a chance to fulfill a fight fantasy by playing Bruce Lee in the new UFC game.”

You can see a glimpse of Lee at the end of this new trailer:

For a deeper look at the game's fighting mechanics, take a look at this trailer.