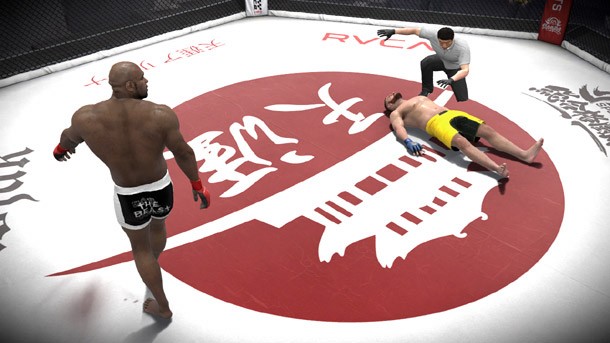 MMA fighters have to be fairly well-rounded to survive in the world of mixed martial arts. It’s hard, let’s say, for a boxer to jump into an MMA ring and dominate the competition without first practicing his ground game. Comparably, the fact that EA Sports MMA was built out of the Fight Night boxing engine may mean that the game has fast hands, but does it mean that it’s well rounded enough to win the title belt?

Every fighter has to start at the bottom, and MMA’s career mode is no different. After creating your own fighter from EA’s detailed creation software, you’re introduced to the hilarious Bas Rutten, who guides your fighter through a series of training camp routines, international league invitations, and a variety of tough opponents. It’s a passable excuse to string a bunch of MMA matches together and build up a boxer using light RPG elements, but the meat of the game is still found in the ring.

With two MMA titles currently on the market, it’s hard not to compare this with THQ’s game. EA offers up a faster-paced, less-technical fighter, and it doesn’t seem to care how much you already know about the sport. Its analog-based combat allows fighters to jab, hook, and uppercut by throwing the stick through different rotations. This makes the action a little more about feeling out your opponent’s weaknesses and responding to his attacks than it does about memorizing a stock set of pre-scripted attacks. The game also allows you to employ a certain level of strategy. For example, if your opponent is running all over the mat so that you can’t get a lock on him, you can focus your attacks on one of his legs until it becomes dead weight that he has to carry around the ring.

After taking your opponent to the mat, MMA becomes a strategy game where you’re trying to balance your stamina against your opponents, as you fight for better positioning. With the simple press of a button, you transition forward towards a posture that will set you up for a submission hold, choke, or the ground-and-pound. Your opponent can block or reverse your maneuvering if he acts fast enough, but you can also throw a few punches at his head to throw him off his game. It’s a fairly simple system, but the nuances of knowing when to attack, when to block, and when to shoot for the risky double transition gives the game some complexity that is especially exciting when you’re facing a human opponent.

EA’s first attack on the mixed martial arts scene heads back to its corner looking pretty strong, but there are still a few holes in its defense, one of which is the game’s roster. There are some great fighters in this game – such as Fedor Emelianenko, Satoru Kitaoka, and Randy Couture – but without the UFC license and many of its most potent combatants, there is a large hole in the game’s roster. The game’s presentation also lacks a bit of the spectacle and style found in real broadcasts. I’d also like to see some refinement to the submission system as the minigames you use to put the hurt on your opponents feel a little gimmicky. Despite these issues, EA Sports MMA is still a powerful brawler, and another year or two in the gym should turn it into a true monster. 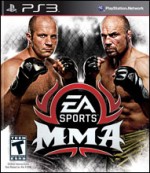 The fact that EA Sports MMA was built out of
the Fight Night boxing engine may mean that the game has fast hands, but
does it mean that it’s well rounded enough to win the title belt?

Purchase More Info
8.5
i
Game Informer's Review System
Concept Take the boxing from Fight Night, flesh out the ground game, and then add MMA fighters from around the world
Graphics Not only are MMA’s character models incredibly detailed, but their animations are uncannily lifelike
Sound MMA’s commentators have a real grasp on the in-ring action, and bring up important stats and details about your fighter’s history during career mode
Playability The simplified control scheme makes it easy to get out of bad situations, which keeps the action fast and forces you to think on your feet or with your back against the mat
Entertainment MMA isn’t the most life-like fighter on the market, but its fast pace and easy-to-grasp control scheme make you feel like a real mixed martial artist
Replay Moderately High