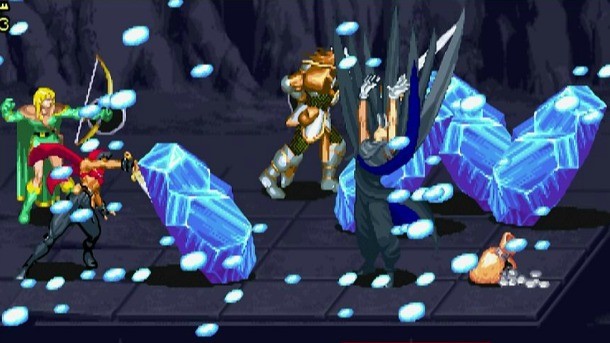 While more gamers likely remember playing cooperative arcade beat ‘em ups like Final Fight, X-Men, and TMNT, the strongest entries in the genre came along a couple of years later. The two D&D brawlers (Tower of Doom and Shadow Over Mystara) stand among the best of the era, and it’s fantastic that players new and old can now enjoy enhanced versions of both. The imaginative monster designs, flexible combat system, and unique character classes in this remake defy the game’s age, making for a collection that’s a success even before accounting for its enjoyable extras.

Both of the games in this download boast similar features; up to four players join up, either online or on the couch, and fight their way through a collection of classic D&D monsters like beholders, kobolds, displacer beasts, and dragons. As you hack and slash, each of the character classes shines in its own way, from the dwarf’s impressive fortitude to the mage’s crazy selection of spells. Branching paths take you through different level designs and bosses to reach game completion, significantly boosting the replay value on what is a relatively short playthrough.

The far superior Shadow Over Mystara is the real reason to hop in and play – its broader class selection, better stage structures, tighter controls, and expanded inventory options hold up far better than its predecessor, Tower of Doom. Even so, I love that both games are available in a single package, and some of the newly added extras help tie the experience together.

A new meta-level system of challenges gives players something extra to shoot for in each playthrough, and earned coins can be spent to unlock attractive D&D-themed artwork. I also enjoy the new options for customizing game sessions with “house rules,” including a challenging Time Attack mode. Both games contribute experience points for leveling your profile up to the epic tier, though it’s disappointing that the reward for doing so is little more than bragging rights. Chronicles also tracks your character usage over the life of the game, showing favorites and lesser-used characters, and online leaderboards allow players to compare stats – though that’s admittedly not core to what makes these games fun. On the technical side, I appreciate the options for smoothing out the visuals for a more modern graphical presentation, and toggles for original display or widescreen perspectives are a welcome inclusion.

As legacy remakes of two games that far too many gamers missed the first time around, the Chronicles of Mystara collection is a definitive success. Even so, arcade brawlers by their nature carry over some flaws when brought to home console. Most notably, the game holds little challenge, and without the need to pump in quarters, there’s no reason to play carefully or strategically. In fact, the original design was so oriented to eliciting additional credits that later levels sometimes feel silly because of how much you’re forced to tap the Continue button. Nonetheless, flashes of brilliance are in evidence throughout these Dungeons & Dragons adventures, and both games were far enough ahead of their time to hold up to scrutiny. Four friends could have a great time blasting through both games in an extended evening get-together.

Purchase More Info
7.75
i
Game Informer's Review System
Concept Battle through two cooperative brawler games flavored with RPG leveling and powers
Graphics The original ‘90s games include some great art and animation, and new filters help smooth out the pixelation
Sound All the music and voiceover work is intact, for better or worse
Playability Simple controls still offer flexibility and cool special moves, especially in Shadow Over Mystara
Entertainment A great trip back in time to the height of the arcade brawler scene, now enhanced with some fun extras
Replay Moderately High