The life of a dungeon lord isn’t easy – you have a legion of snotlings complaining about their wages, lazy orcs getting drunk off the dwindling beer supply, and your mana reserve is dangerously low. The do-gooders above ground are upset at your subterranean digging and delving, and they keep sending armies down to upset your rule. In Dungeons 2, you won’t let that stand; you grow an unstoppable army backed by powerful magic to decimate the overworld and turn the happy-fun flowers and unicorns into your own hellacious design.

Dungeons 2 is clearly influenced by the Dungeon Keeper games, giving the player control of the dungeon lord’s hand to pick up minions, slap them around, and identify areas to dig and build in. Appealing to players’ fond memories of Dungeon Keeper is a trick that’s been tried before – and not with great success; Dungeons 2 delivers on the nostalgia of the genre-defining classic dungeon sim while providing some new experiences. The sim-dungeon half of the game is handled well, as you create traps, build rooms, collect mana and research spells, and carve out your own customized cozy niche.

The second half of Dungeons 2 is more focused on real-time strategy elements in the overworld areas. Instead of simply playing house in your own sim-dungeon, you take direct control of your forces above ground. Players sling spells in a fashion that gives them a chance to show off their micromanagement skills, managing battles above and economy below at the same time.

These elements are even more emphasized in multiplayer, where close matches have you scrambling to handle many elements at once, closer to a RTS feel. The first factions offered at launch are balanced to accommodate this. Dungeons 2 features two playable factions: the orc-style Horde and the fiendish Demons. The Horde is a potent early aggressor that requires less micromagement, while the Demons have the advantage in the endgame if you can handle a more frenetic management pace.

The campaign features a lot of forced humor that doesn’t always work, but it’s a mostly entertaining experience that slowly introduces each core dungeon feature and keeps you battling with the forces of good. It’s dull at times, but that’s sort of the nature of a sim-progression experience. The multiplayer components offer a much more exciting and involved experience, with modes that allow players to skip the doldrums of building up a higher-tier dungeon and interesting ways to win. Some modes still involve invading other players’ dungeons, but many are more focused on skirmishing over objectives in the overworld.

Dungeons 2 does an admirable job of channeling that old-school Dungeon Keeper feel into a new title, and fans of the series will find some enjoyable evil to be had in the dungeon-sim genre. Swapping between dungeon and overworld can make the game feel schizophrenic at times, but once you get the hang of it, it’s not a significant detractor.

8
About Game Informer's review system
Concept
Build up an impressive dungeon and take your evil monsters to defile the forces of good on the surface realm
Graphics
Lighthearted and cartoony, bolstering the theme of jovial evil
Sound
Lots of little chirps and blurps from your army of minions sync up well with the gameplay
Playability
Easy to get the hang of quickly, especially with early campaign stages functioning as a “tutorial.” More depth and skill are showcased with the second faction, The Demons, and multiplayer mode
Entertainment
An effort that will please long-time Dungeon Keeper fans, with additional longevity provided by a variety of multiplayer modes
Replay
Moderate 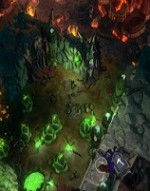