With Dungeon Siege III, developer Obsidian Entertainment brings the hack-and-slash RPG series to consoles for the first time. The game is firmly entrenched in old-school tropes, but it does add a few more contemporary enhancements.

The story is set in the kingdom of Ehb, though you don’t have to be a Dungeon Siege wonk to get what’s going on. The 10th Legion has been routed, and it’s up to you and your party to remobilize it and prevent Jeyne Kassynder from killing its descendents. Dialogue is handled through a Mass Effect-like conversation wheel, though players are largely guided through preset conversations rather than having multiple choices during verbal encounters. You make decisions in a few key moments – and can see the effects of those choices – but I never felt I was making significant waves in the world. Considering how generic the overall conflict felt, I’m perfectly satisfied with that.

Fortunately, the action feels more immediate and engaging than typical games in the genre thanks to Obsidian’s approach to combat. Rather than merely hammering on the attack button and waiting for a spirit gauge or mana bar to replenish automatically, you have to be an active participant in battles to pull off flashy moves. As you attack enemies, a will meter fills with each successful blow. That meter is tied to all of your character’s abilities. In a typical encounter with my archon character, Anjali, I’d pick away at enemies with ranged fire blasts, and then summon my fire jackal when I had scraped together enough will. As it baited and attacked my foes, I was free to scorch them with pillars of flame or area effect infernos. When I got hurt, I couldn’t rely on a few quaffs from a potion to cure my wounds instantly, either. Each of the four characters has some form of healing ability, though they replenish health over time rather than in one instant chunk.

As a gamer who appreciates the action part of action/RPGs, I enjoyed how Dungeon Siege III kept me involved in battles. You don’t reap any benefits from hanging away from combat, so I had to reexamine my usual caster strategy of nuking groups of bad guys, running away, and then turtling as I waited in seclusion for a mana bar to max out again. Instead, I often found myself weaving in and out of groups of enemies, dodging and blocking their attacks as I got my lumps. Each character has two stances, which affect their offensive and defensive abilities. For example, Anjali’s fire form lets her use those powerful flame-based attacks, while her human form focuses more on staff-based physical damage.

Character customization is satisfyingly deep, and players can tweak each character’s abilities through proficiencies. For instance, Anjali’s fire jackal can be tweaked to do more damage or have a bigger pool of hit points. Each ability has five slots for proficiencies, so you have to make some tough decisions. Beyond that, talents offer ability neutral buffs to characters, such as improved healing or additional damage.

In the single-player campaign you fight side-by-side with an AI companion. I found that having Legion swordsman Lucas Montbarron at my side made life significantly easier, thanks to his tanking abilities that complemented my more mage-like skillset. I didn’t have any direct control over Lucas, though I got to upgrade his abilities and equipment. I was surprised (and impressed) by the amount of autonomy he displayed. He used his various abilities effectively, waiting for enemies to cluster together before attacking groups with his special sword slashes, or making sure that the area was clear before attempting to revive me if I was down. He even picked up gold on his own at the end of skirmishes, though he left the loot on the ground.

Alas, loot management is a major weak spot, which is a problem for a game that showers players with all manner of weapons, armor, and goodies. Weapons are ranked in a variety of attribute-enhancing categories, but optimizing between piles of gear can quickly become a headache. You can compare items against what you have equipped, but you can’t sort your gear according to different bonuses, which would have been a tremendous help. After a few hours, I stopped looking forward to incrementally better gear, which is a problem when nearly every chest or enemy encounter fills your sack with more. If you like playing with a spreadsheet in your lap, however, more power to you.

Multiplayer is a big draw for Dungeon Siege III, and it’s handled fairly well. Players are tethered to one another, whether in the two-player local co-op or through four-player online matches. Because of the small size of some of the areas, it can feel constraining at times – especially when there isn’t consensus on which direction to explore next. It’s also easy to lose your character amid the various spell effects and trap displays. It doesn’t help matters when the targeting system occasionally has a mind of its own; in a few battles I aimed at where I thought the enemies were and hoped for the best.

The story didn’t bowl me over, but I enjoyed the setting and characters. Obsidian brings a neat steampunk vibe to the proceedings, with automatons, firearms, and graphical embellishments that make the world feel unique without being self-conscious about it. You can check most of the usual fantasy settings off your list, too, such as a haunted forest, frozen wasteland, and murky swamp, but there are enough little touches to keep it interesting. For instance, as you make your way across a mountain pass, enemy cannons are firing on you, striking your party and causing the occasional rockslide. It makes the world feel more dynamic, which is great.

I recommend Dungeon Siege III to anyone who wants to connect with friends and kill a whole mess of monsters together. Thanks to the strong AI, even the single-player campaign is worth a look if you can’t wrangle up a party. It’s one of the best hack-and-slash options out there for consoles, and it’s no slouch on the PC front, either.

8
About Game Informer's review system
Concept
Journey across a magical land on a mission to save the world, while running loads of errands along the way
Graphics
The screen is often filled with a dazzling array of spells, traps, and other flashy eye candy; character models look great when you zoom in
Sound
The music and ambient sounds are fantastic, though the voice acting leans toward the renaissance fair side of the spectrum
Playability
The camera occasionally jams into awkward angles, but overall everything works well
Entertainment
If you’re looking for a fun, old-school dungeon crawler, you can stop looking now
Replay
Moderately High 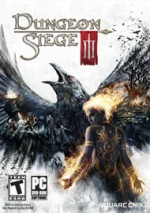