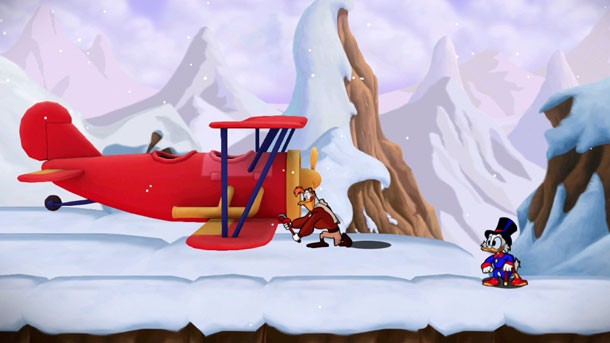 Capcom series like Mega Man and Street Fighter often get the spotlight, but the company has a war chest of beloved 8- and 16-bit Disney platformers ripe for remaking. Not least among them is 1990’s DuckTales for the NES. Capcom has partnered with Disney to rebuild the downloadable game with new vibrant visuals, original voice work from the cartoon’s cast, and overhauled level design. DuckTales: Remastered is a carefully penned love letter that appeals to fans of the ‘80s show and solid platformers.

The beautiful hand-drawn sprites and voice work will give older gamers Saturday morning flashbacks. Beneath the tribute to Scrooge McDuck’s heyday is a capable platformer focused on using the feathered billionaire’s cane as a pogo stick. Players bounce off enemies’ heads to cross chasms, traverse spike pits, and reach secret areas. Despite the decadent visuals, landing jumps and attacking enemies feels precise and reliable. I love chaining together a series of pogo stick attacks without Scrooge’s feet ever touching the ground. This unique mechanic holds up well, but the game doesn’t evolve much in terms of complex platforming after you learn the ropes.

This isn’t a one-to-one remake of the original. Capcom added in a prologue level where the Beagle Boys attempt a heist on Scrooge’s money vault (which I dove into and swam in to my delight). After the prologue, players can choose which order to conquer the game’ levels. McDuck’s travel itinerary includes treks to Transylvania and the Moon. Capcom has remixed these levels and added a map, which removes the guesswork and backtracking that comes with some games of the NES era. Scrooge still performs memorable feats like hanging off a helicopter and riding mine carts, but these sections feel more balanced than the original game. Brief story segments point the player towards the mission, which usually involves retrieving a few key items before heading to a boss encounter. The streamlined levels help preserve momentum, but it felt like I was being babied at times on normal difficulty with the amount of health pick-ups and permanent life expansions awarded.

Wii U owners can play the game on their GamePads

Each stage delivers a variety of new enemies with unique and fun gimmicks. Hockey ducks slapshot ice bricks at you in the Himalayas, and Scrooge uses his cane to golf swing a mummy’s own ball and chain back at him. The boss battles are particularly well done, my favorite being the final showdown with Dracula Duck. The vampire’s screen-filling attacks are intimidating at first, but practice and memorization lead to a satisfying victory. DuckTales has challenging moments without ever demoralizing the player; my palms were sweaty by the time the credits rolled.

Gamers and Disney fans have a potent nostalgia for the DuckTales franchise. The 8-bit classic is remembered fondly as a top-notch platformer, and the cartoon’s cultural impact is deep enough that most 20- or 30-somethings can hum the theme song on demand. DuckTales: Remastered blends the cartoon and the NES game together beautifully. Fans of modern platformers can expect a simple lighthearted romp, but gamers who grew up in Duckburg are the ones who shouldn’t miss out on this endearing homage.

Note: Xbox 360 users have to wait until September 11 for DuckTales: Remastered to arrive on XBLA

DuckTales: Remastered is a carefully penned love letter that appeals to fans of the ‘80s show and solid platformers.