In a time where virtually everyone has had their fill of internet trolls and inflammatory comments, Drawn To Death stands out as the sterling answer to a question no one has ever asked: How can we make online gaming even more obnoxious and offensive than it already is?

If you know Drawn To Death as "that notebook game," then congratulations: You've identified the one thing that truly makes the four-player online arena shooter stand out. While the student-doodle aesthetic is certainly novel, it takes its toll on the gameplay. At best, the on-screen action is muddled by sparsely detailed visuals and ugly HUD. At worst, it's a literal eyesore that leaves you with a headache. Nevertheless, Drawn To Death doubles down on the angsty teen concept with buckets of immature gags and insults, and from there it's a race to see what makes you stop playing first. I don't want to spend too much time harping on Drawn To Death's odious presentation, because it's exactly the type of attention the game so desperately craves. Everything from the insult-spewing tutorial toad to the obscenity-shouting announcer is designed to titillate and offend. There's a reason for that: Beneath the constant stream of aural and visual vulgarities, Drawn To Death is a woefully underwhelming arena shooter. Sophomoric jokes – like a gaping, in-game rectum that houses a health power-up – hope to distract you from Drawn To Death's myriad inadequacies. These include a small character roster, by-the-numbers game modes, and a four-player match size limit – which the game still has trouble filling despite Sony giving it away free to everyone with a PlayStation Plus account and low expectations.

Drawn To Death's multiplayer modes consist of 1v1 brawls, 2v2 team deathmatch, 3- or 4-player free-for-alls, and a mode where you pick up drops from slain enemies and deposit them for points. In other words, it offers nothing you haven't played in a hundred other shooters. Which mode you get depends on how many players the matchmaking can wrangle up in the minutes-long wait time before the round begins. Even days after launch, full four-player matches are rare. Regardless of the player count, the small map sizes keep the action moving, but the core mechanics aren't fluid or responsive enough to make it satisfying. Drawn To Death's characters are a little more memorable, thanks to their unique abilities. Ninjaw (a buxom anime ninja with a shark head) can use her oversized anchor to hookshot her way around maps, while Cyborgula (a cyborg gargoyle) can hover over the battlefield with a tap of the button. However, the button inputs and techniques for each character's abilities aren't intuitive or uniform, so you have to rely on rote memorization to learn everyone's move sets. The same is true for each character's pros and cons, which make them strong/weak against other specific individuals. Devoted players may find some depth and strategy in these nuances, but with such underwhelming modes and gameplay, there's no reason to become devoted in the first place. After a few matches, most players will be ready to move on to a bigger, better game.

If not, Drawn To Death has some innovative new ways for punishing your decision to stick with it. Beyond the insult-slinging announcer and characters, players are plied with a wide variety of unlockable taunts to spam other players with. These animated images pop up on player avatars and kill screens, and emulate the dankest of internet memes. For example, I unlocked a tombstone with the witty slogan "R.I.P. Your Ass." To drive the joke home, the tombstone itself is also shaped like a butt. I can't think of a better metaphorical representation of what Drawn to Death is, or why you can skip it. 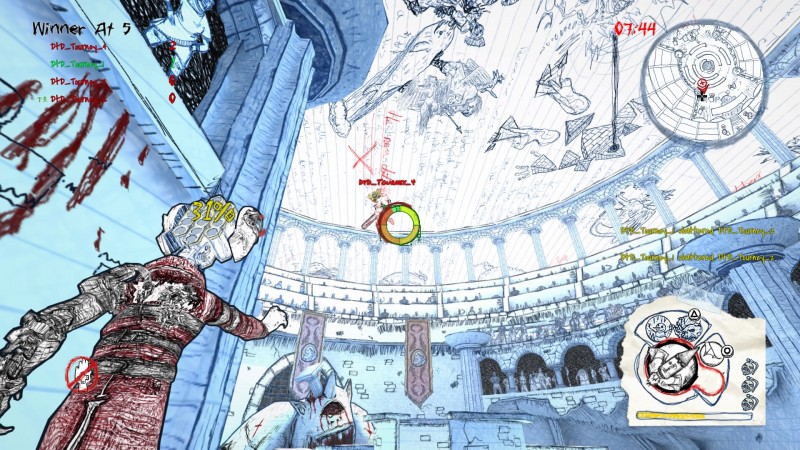 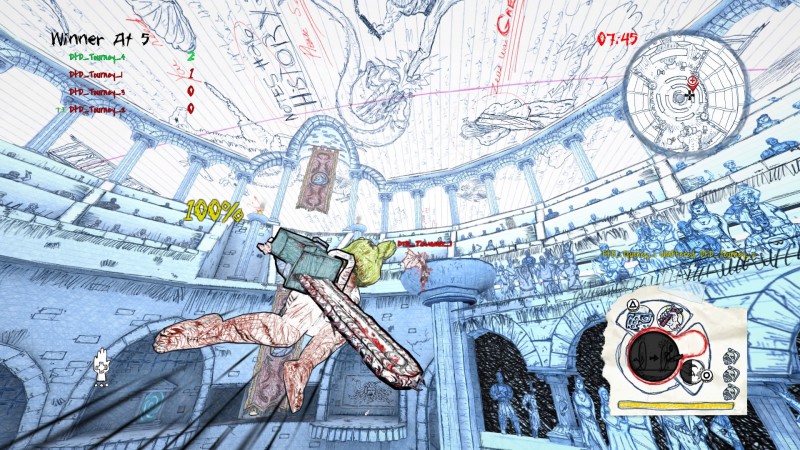 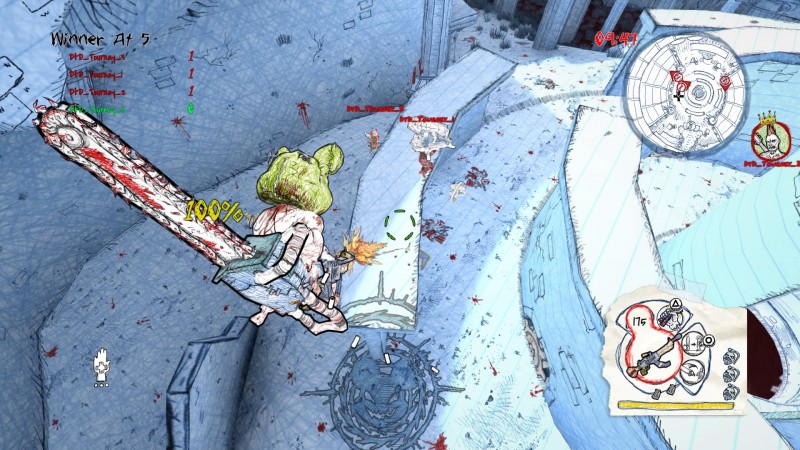 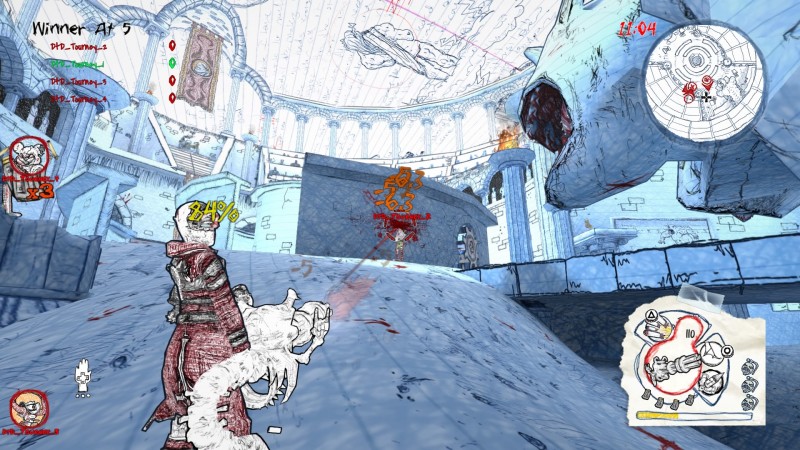 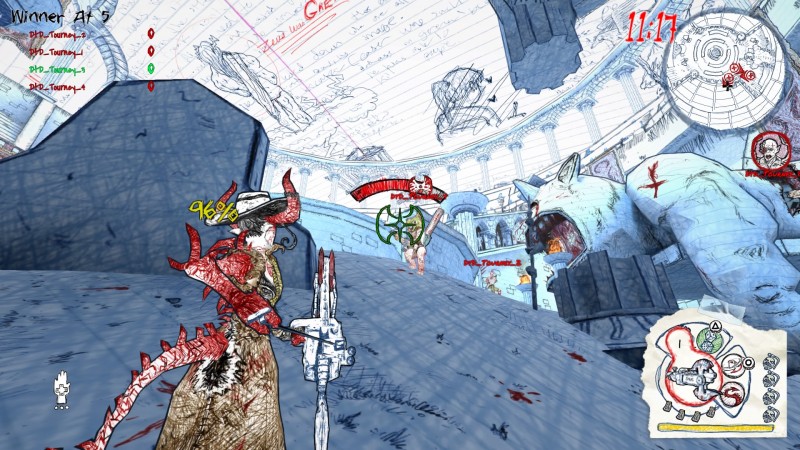 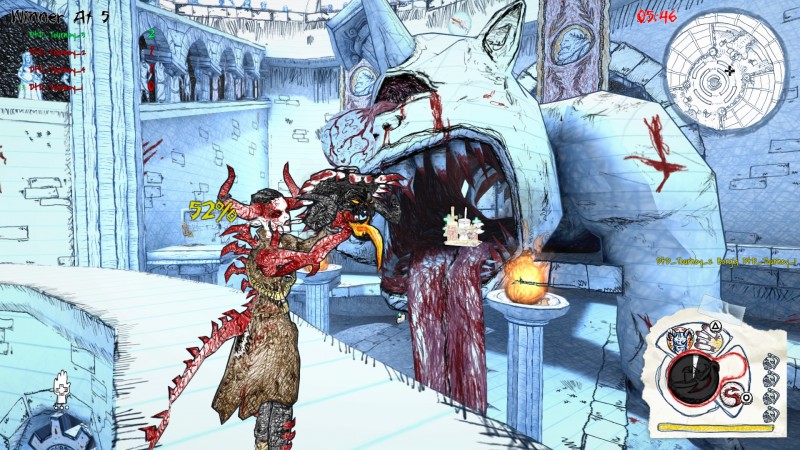 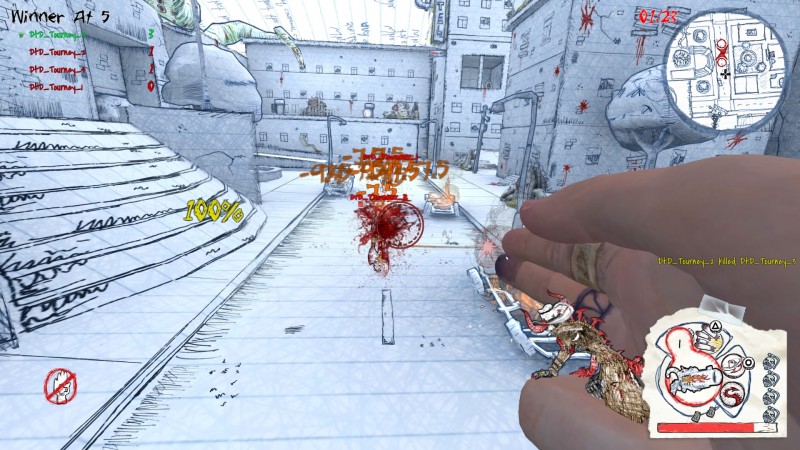 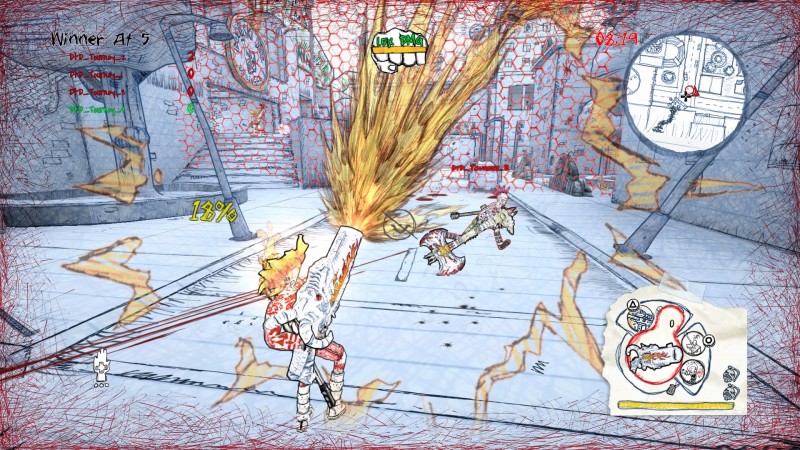 Beneath the constant stream of aural and visual vulgarities, Drawn To Death is a woefully underwhelming arena shooter.

Purchase More Info
5
i
Game Informer's Review System
Concept Dress up a lackluster multiplayer shooter with as much obnoxious, '90s-era 'tude as possible
Graphics The "manic doodles of a high school bully" aesthetic is certainly unique, but it also makes your eyeballs want to puke
Sound Do you like annoying announcers loudly barking insults at you all the time? If so, you're in luck!
Playability The mediocre shooting mechanics ultimately get the job done, but they're not satisfying
Entertainment The barebones arena action offers too few thrills. If the distracting visuals don't turn you off, the sophomoric humor and constant barrage of insults will
Replay Moderately low