Soulless Blood Splatter
by Kimberley Wallace on May 20, 2014 at 02:30 AM
Publisher: Square Enix
Developer: Access Games
Release: May 20, 2014
Rating: Mature
Reviewed on: PlayStation 3

The Drakengard series has always been divisive. Repetitive gameplay and frustrating controls have alienated some players, while the dark tone and furious action attracted a devoted (albeit small) base of dragon-loving fans. Drakengard 3 doesn’t correct the series’ imperfections; instead, it adds to them with poor controls, redundant levels, and horrendous characters.

Despite all its weaknesses, Drakengard 3 has an interesting premise. In this prequel, you play as Zero, a heartless woman with an appetite for murder. Who does she want to kill most? Her five sisters, who are charged with keeping the world at peace. Why Zero has suddenly had a change of heart and turned murderous remains mysterious, with scenes only offering small hints. Playing as such a callous character is a nice change of pace and an interesting role to explore. You hate what she does, but you assume she must have her reasons.

Unfortunately, the narrative and characters make a lot of missteps. First off, Zero has a dragon to help her, who tries to act as her conscience, but his shtick is overplayed. Every mission, this wide-eyed dragon asks her why she has to kill, and the heavy-handed message gets old fast. Zero also acquires disciples along the way who are just as unbearable, like an old man who is obsessed with his genitals, and another character who won’t stop talking about getting in Zero’s pants. The attempts at quirky humor fail; the jokes are all low-hanging fruit, like the dragon always talking about his bowel movements. Zero has some good one-liners, but the better efforts are buried in a lot of bad party banter.

Each sister has a set of levels to conquer before you can attack her, and these linear affairs are bland and uncreative. The setup is always the same: Slice your way through a sea of enemies, engage in a boss battle, and maybe use your dragon in an even larger fight. The combat-oriented action is smooth and has some depth, since you can chain together combos. You also can choose between different weapons, like swords and spears, which have advantages over certain enemy types. Additionally, you can activate a special mode that renders Zero untouchable while she goes berserk and deals higher damage. The elements for an interesting combat system are present, but they never come together in a satisfying way. This is mainly due to boring level design and predictable enemy patterns, which turns Zero’s impressive arsenal into a dull hack-and-slash affair involving little strategy or skill.

Your A.I. party members also aren’t much help in battle. They often run right into attacks, or directly into walls. Unfortunately, the aforementioned issues are only scratching the surface, you can also add long load times, bad checkpoints, and an overall lack of polish to the list.

The dragon fights should have been a highlight of Drakengard 3, but they are some of the worst battles due to the poor controls. Moving your dragon is clunky, the targeting system lacks precision, and the camera is terrible. Being unable to see where enemies are striking from makes it difficult to respond properly – and even then, the sluggish controls don’t convey the sense of power you’d expect from having a dragon at your fingertips.

As with past Drakengard games, the game has multiple endings. However, if playing through the game once is such a pain, I can’t imagine who would willingly go through such lackluster content multiple times. Drakengard 3 offers some bright spots at first, but those quickly flicker and fade. It simply doesn’t have enough to redeem itself from its laundry list of flaws. 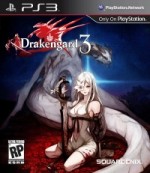 Purchase More Info
6
i
Game Informer's Review System
Concept Play as Zero, a woman on a mission to kill all of her sisters protecting the world
Graphics The visuals aren’t impressive, with stock environments and generic character models. The cutscenes look better, but aren’t exactly thrilling
Sound Solid voice acting and a few standout songs accompany the game, but some of the music gets repetitive
Playability The basics are easy to grasp, but the finicky controls are frustrating
Entertainment Outside of a few interesting scenes and battles, Drakengard 3 is too routine and flawed to recommend
Replay Moderate