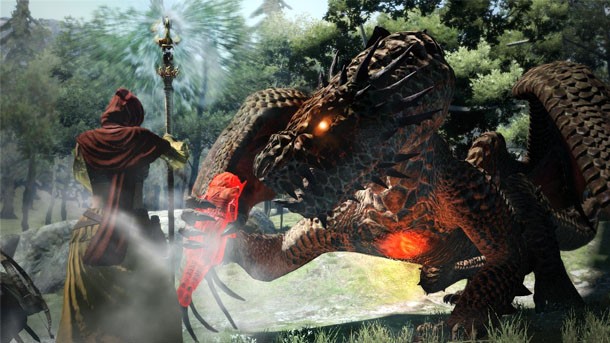 Dragon’s Dogma is one of those rare “have your cake and eat it, too” games, where the inspired designers take elements from several different genres and mash them together. In this case, open-world RPGs and hack-and-slash action games are the source materials. It’s not perfect, but its arsenal of unusual party mechanics and combat flourishes make it worthy of any virtual sword-swinger’s time.

Dragon’s Dogma is strictly a single-player experience, though AI companions called pawns help sell the concept that your hero isn’t alone in the sprawling fantasy world of Gransys. You create your own pawn in the beginning of the game, selecting its gender, tweaking its appearance, and choosing its class. As you travel the world, your pawn soaks up and shares information about the environments, quests, and enemies it’s exposed to. In a battle against a cyclops, for instance, your companion might recommend stunning the creature with a blast of lightning. Walk near a beach, and your pawn may drop hints that valuable items may have washed ashore.

If you’re connected online, you can hire pawns that other players have created, and they’ll join your game with whatever knowledge, gear, and skills they’ve already acquired. It works the other way around, as well. When you visit an inn, you may get word that your pawn has returned back from adventuring in someone else’s game (even if they’ve been beside you the entire time. Suspend your disbelief.). Those adventures add to your pawn’s knowledge base, meaning that they can help you out in situations that are new to you. It’s quite clever, and I always got excited each time my pawn came back with valuable information – especially when those tips led to more loot.

Pawns may not be the greatest conversationalists – expect to hear plenty of repeated dialog – but they’re indispensable in battle. Dragon’s Dogma provides a rich and satisfying combat system, and the pawns hold their own against Gransys’ varied bestiary of classic mythological creatures. Some of the team members from the Devil May Cry series worked on this game, and that pedigree shines through the action-heavy encounters. Players have access to a wide array of combos, juggles, and other deadly tools. Your character’s actions are quick and responsive, and combat feels more like something that you’d experience in a full-fledged action game than the sluggish offerings that action RPGs typically provide. You can create a balanced party with tanks, healers, and damage dealers, but it’s not mandatory. I had the most fun when my magic archer teamed up with a pair of mages and a sorcerer. My heat-seeking arrows combined with their magic attacks to create a deadly spectacle.

One of my favorite parts of the game is how Capcom expertly layers skill progression, loot upgrades, and the pawns to sell the feeling that you’re a powerful force in a brutal world. I was pleased to see how regularly my skills progressed throughout my journey, and they went far beyond the simple “+2 damage” type improvements I’ve grown accustomed to. I felt pretty slick the first time I fired ricocheting magic bolts of energy into an unexplored tunnel and heard unseen monsters squeal in pain. A few hours later, I was able to shoot three of those same blasts simultaneously. Character respecs are easy, which came in handy when I jealously watched a melee-based pawn in action. A short while later, I was exploring the world as a newly minted warrior.

If you need a strong story to pull you along in your adventures, you may be disappointed with Dragon’s Dogma. In the beginning of the game, your character meets a dragon and has his or her heart yanked out. From there, it’s up to you to find the dragon and slay it. That’s basically all there is, for better or worse. Personally, I’d rather make my own fun than sit through hours of cutscenes, so this spartan approach didn’t bother me. Quests provide a nice incentive to explore the world and give the experience some much-needed direction. Capcom delivers a solid balance between mundane collection quests and more ambitious tasks. In one early mission, I had to escort a rickety cart carrying a hydra’s head to a duke for a tribute. The bloody trophy was a magnet to the region’s goblins and harpies, and I was barely able to guide the cart through a winding canyon with just a sliver of health remaining.

I play a lot of action/RPGs, and I was continuously surprised at how Capcom managed to freshen up many of the stale aspects of the genre. Mages and sorcerers deal with elements we’ve all seen before, but not quite like this. Freakish spires of ice pummel unsuspecting foes, while lightning attacks are delivered not in mini lightning storms, but in crackling bolts that are wielded like whips.

Dragon’s Dogma is an unconventional game for Capcom, and action/RPGs in general. Combat feels like a necessary part of the game’s design, rather than something that was begrudgingly added to provide interaction between cutscenes. I left the game feeling that I made my mark on Gransys the way I chose to, instead of being escorted from plot point to plot point. When you’re talking about an open-world game, I can’t think of higher praise.

It’s not perfect, but its arsenal of unusual party mechanics and combat flourishes make it worthwhile.

Purchase More Info
8.5
i
Game Informer's Review System
Concept Give players an open world, fill it with monsters, and provide their heroes with the tools to dominate
Graphics Gransys is a well-realized world, filled with beautiful scenery and imposing monsters
Sound If there’s a shy pawn out there, I never met him. AI companions fill the silence with their every observation, however mundane
Playability Combat is intensely satisfying, with an impressive amount of class-based attacks and skills
Entertainment Dragon’s Dogma blends the best from open-world RPGs and action games without feeling like a diluted wannabe
Replay Moderately High