Over the last few years Omega Force has done an excellent job of adjusting its reputation to be more than just “the Dynasty Warriors studio.” It has been taking on high-profile franchises like Zelda and Attack on Titan, and delivering novel experiences within its self-established action boundaries. The original Dragon Quest Heroes marked the strongest step forward for its musou action in 2015. The sequel is not a flying leap backwards, but does move in the wrong direction.

In most ways, it follows the formula of its predecessor. You control a collection of original characters trying to figure out what went wrong in a normally peaceful world. Formerly friendly monsters are now on the offensive, and while you’re fighting off the hordes and trying to return peace, characters from past Dragon Quests appear, quickly abandoning their own journeys to get back to their dimension in order to help you solve your problems.

The characters’ motivations are universally shallow (even the new ones who have the most to gain by bringing back peace), amounting to not much more than chasing a fight wherever they can find one. But their personalities are strong and defined, which makes hanging out with them entertaining – even the guest characters I didn’t know. The story offers some twists and turns, but mostly sticks to common tropes I saw coming. The story is not the destination, but I was compelled to see it to its end thanks to its cast.

The combat is also familiar. You hack and slash your way through large-scale battles using the occasional magic attack, build up your combo until you can unleash a super-powerful attack, and then start the cycle over. The action is fun in its simplicity, but gets repetitive long before defeating your millionth enemy. This time around you can play missions with friends online in a limited capacity, which is a welcome cooperative experience, even if adding real humans to your party doesn’t change how you approach each battle.

The biggest change from the original is the structure of the world. Instead of using an airship and flying to smaller levels, you now have the whole country available to you with the opportunity to unlock fast-travel as you progress. Exploring the larger areas is interesting, as it places you on a battlefield that isn’t constantly demanding your attention in various sections of the map. You’re free to explore and fight at your leisure as you make your way to the destination. These levels also lead to more enjoyable sidequests; you can pursue the bonus tasks of collecting items or fighting specific enemies without having to replay previously completed levels, and these areas are big enough that you don’t retread your steps too much.

With all that extra space, small levels requiring smart, tactical use of collected monsters are few and far between. I liked sending monsters east while I fought west to protect the middle in the first game, but in Dragon Quest Heroes II, that level of strategy rarely surfaces. Most of the levels not in the larger areas are bland point-A-to-point-B affairs. Often I was grabbing a monster and immediately unleashing it with little thought toward planning. The strategy element may be gone, but the new ability to temporarily turn into familiar Dragon Quest monsters is a worthy wrinkle to the mechanic. Becoming an ultra-strong monster for a few seconds is empowering, and stomping around as one of the characters you’ve been fighting is fun. A number of levels try to mix things up, which is admirable in a style of game often derided for being repetitive, but nearly all of them come up short. One mission makes you run back and forth across a level to track down a disguised guard. Another has you memorizing the path through a series of portals while the characters openly complain about getting lost. Other levels force you to fight while trudging through deep water, or sliding on giant patches of ice, which is simply not fun. Perhaps the worst offender, however, is a thankfully short sequence where you lose all your weapons and must stealth your way past a number of giant robots. Dynasty Warriors-style action and stealth don’t mix.

For all its shortcomings, Dragon Quest Heroes II ends up a perfectly adequate beat-em-up. I encountered few surprises during my playthrough, but the simple fun of being a single soldier against an army of colorful Dragon Quest baddies is undeniable. I still prefer the original Dragon Quest Heroes, but this sequel continues to inspire confidence in Omega Force as it continues to experiment with its brand of action. 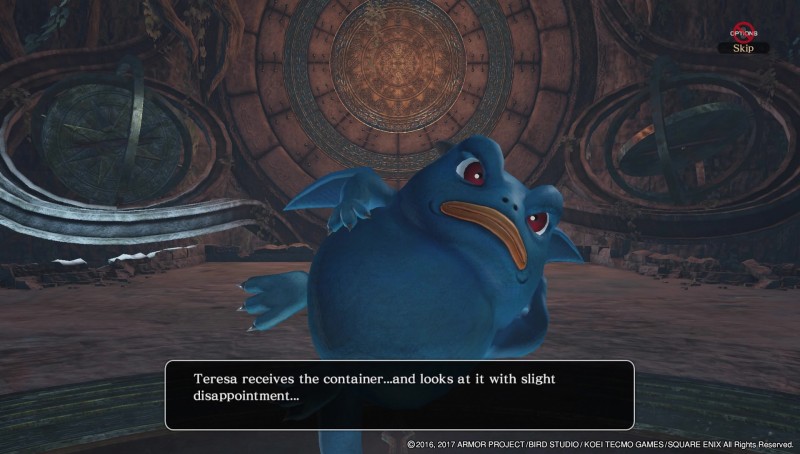 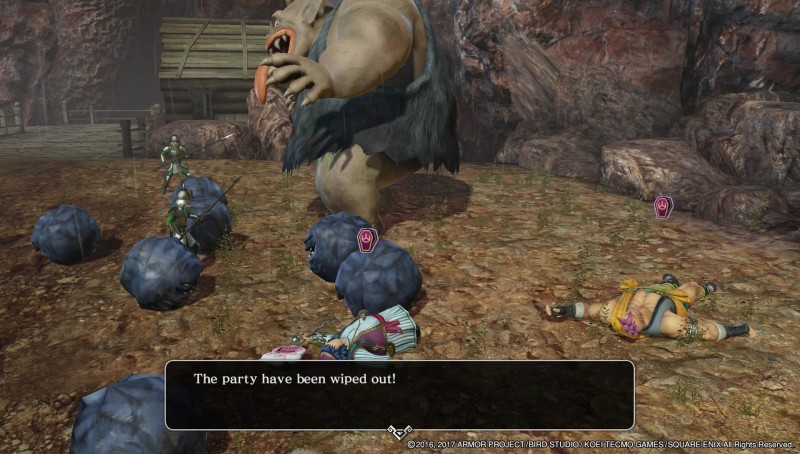 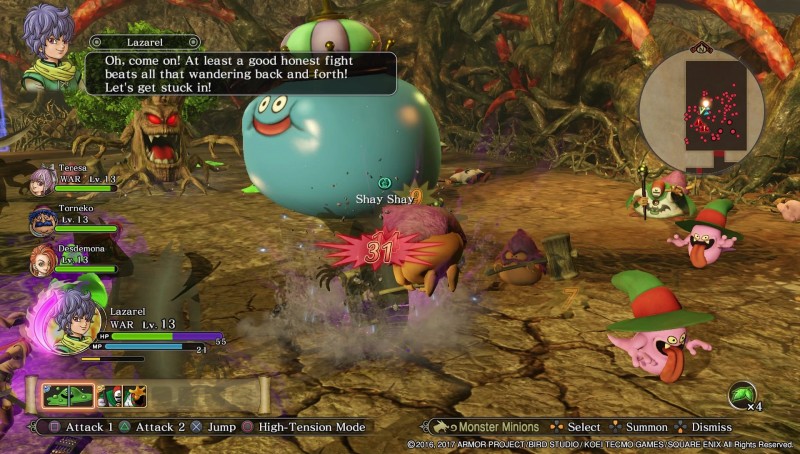 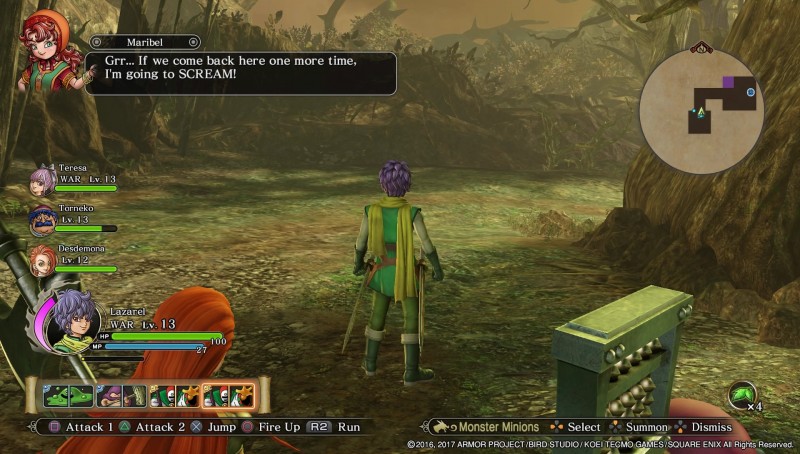 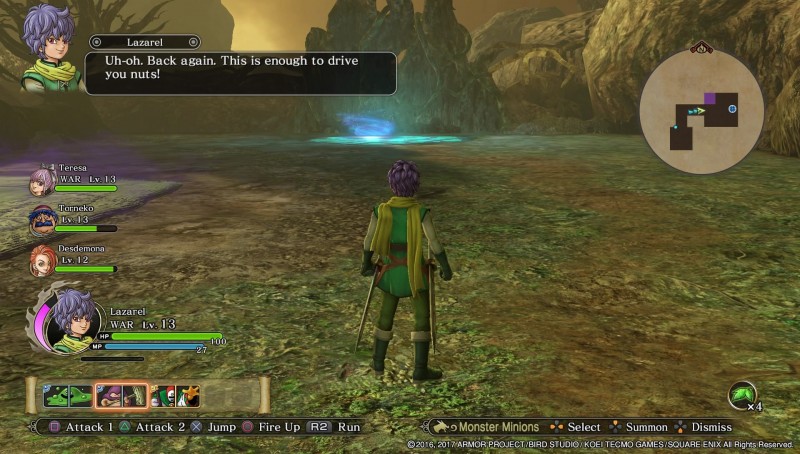 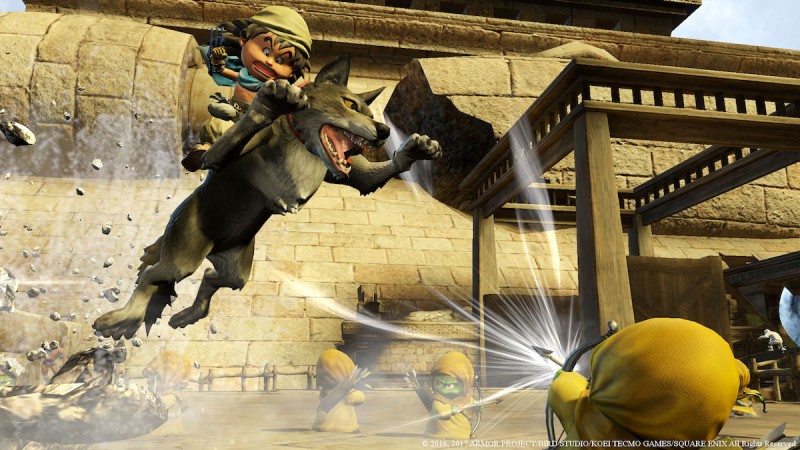 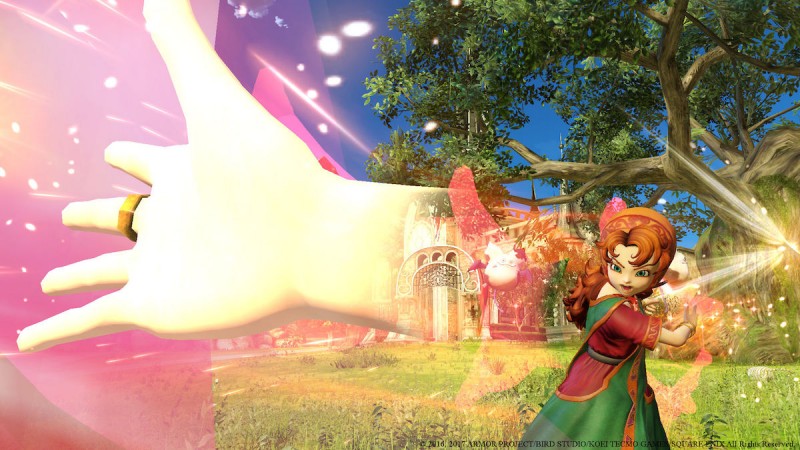 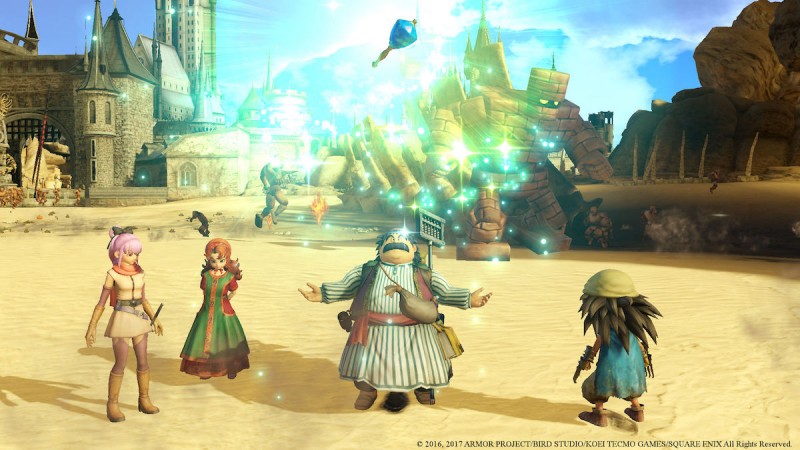 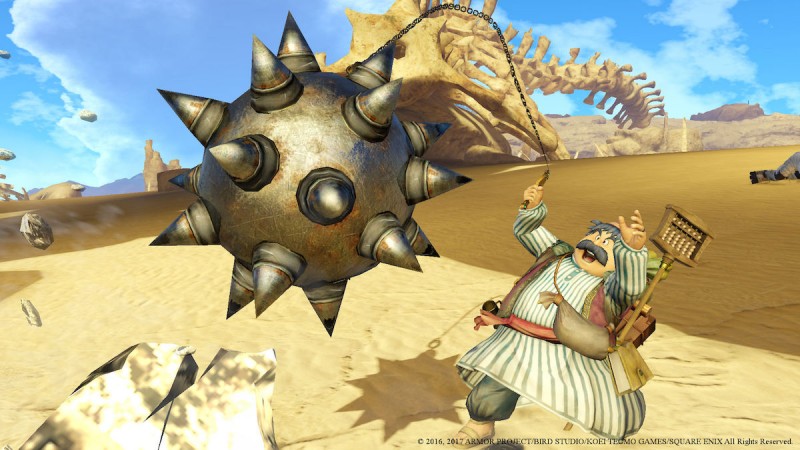 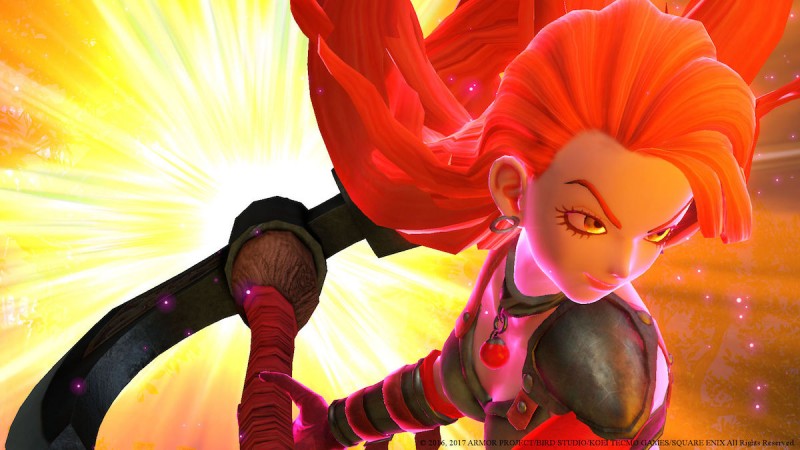 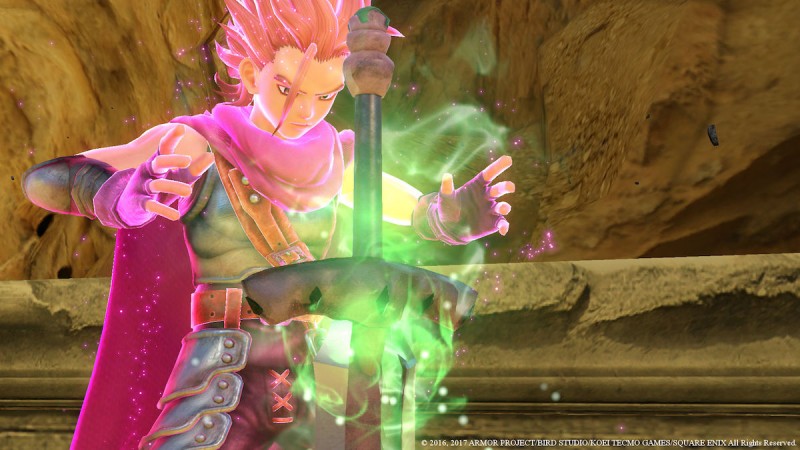 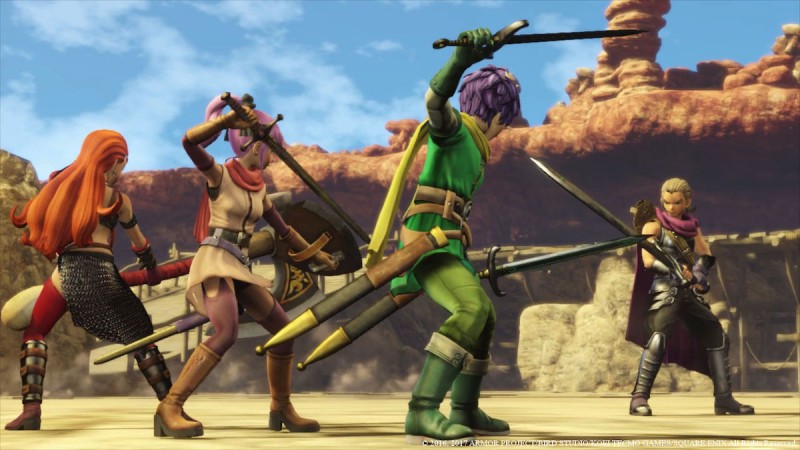 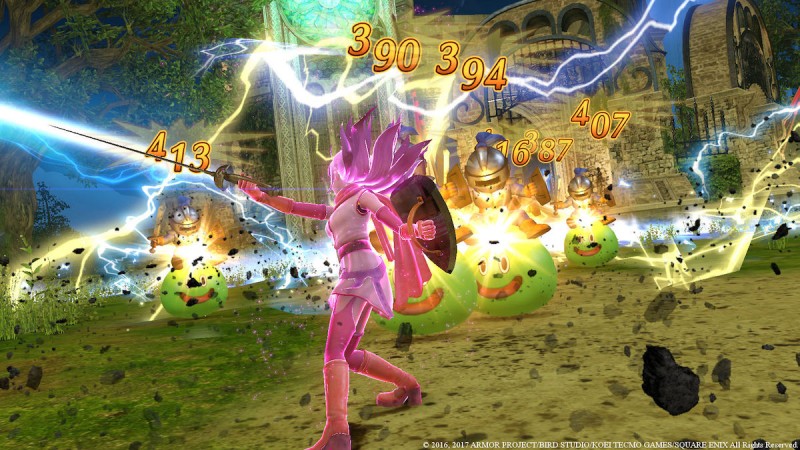 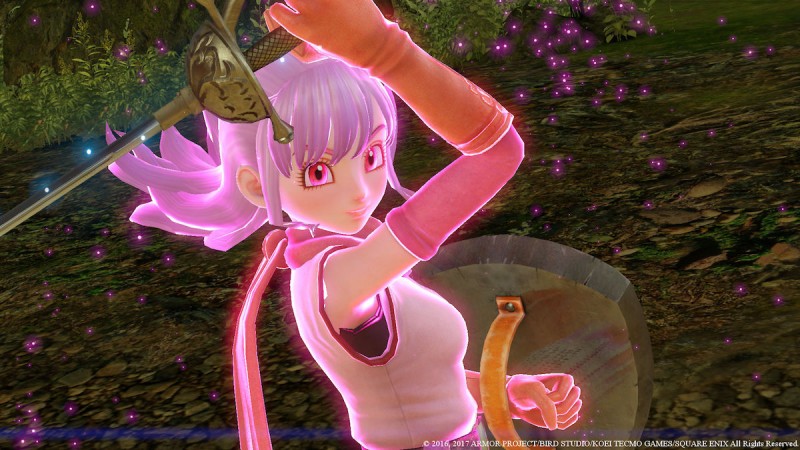 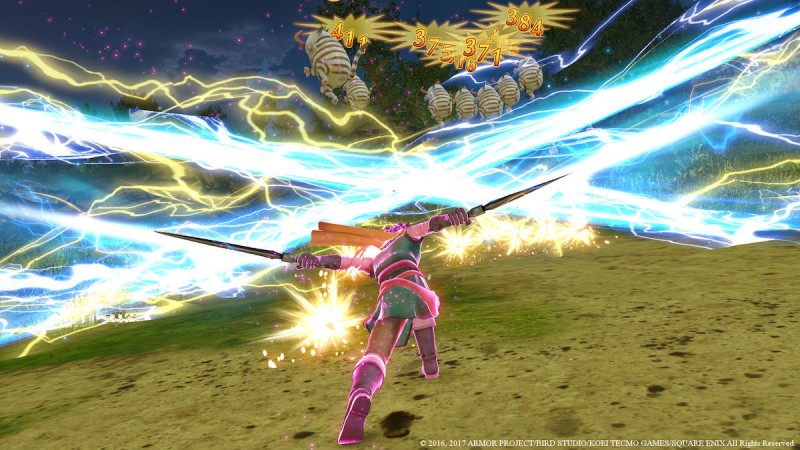 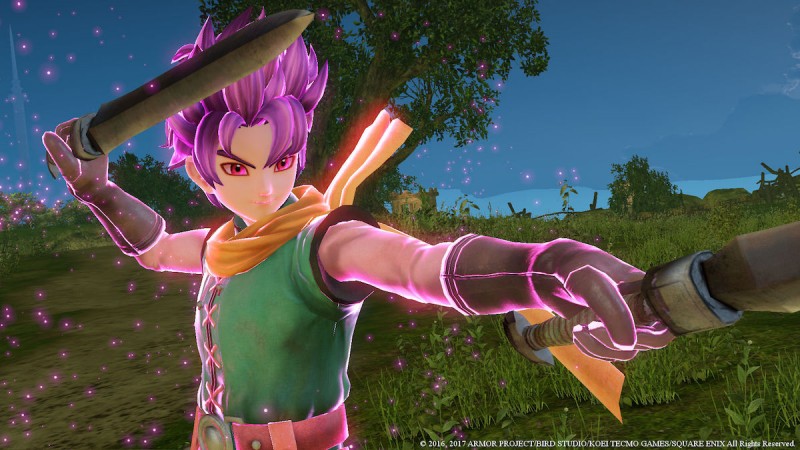 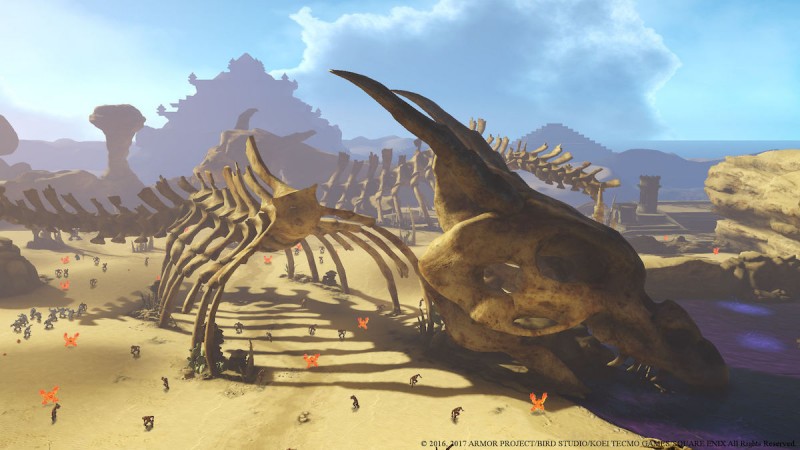 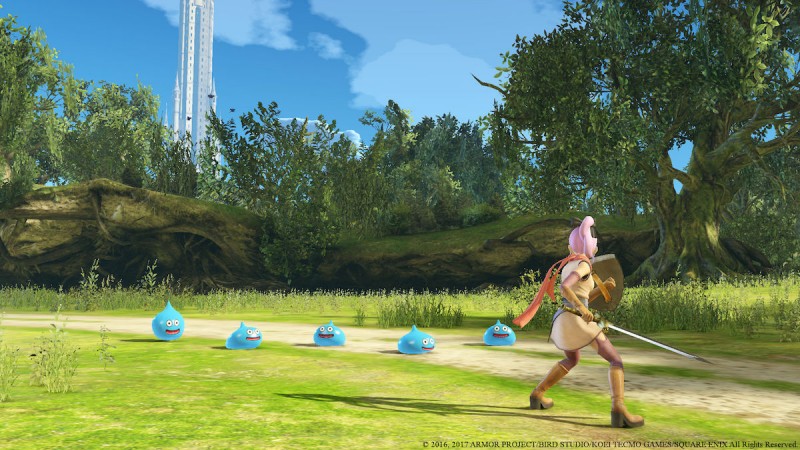 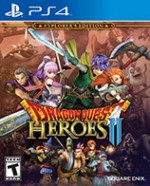 Dragon Quest Heroes II is not a flying leap backwards from the original, but does move in the wrong direction.

Purchase More Info
7.5
i
Game Informer's Review System
Concept Build on the original Dynasty Warriors/Dragon Quest mash-up with a new story, new characters, and new mechanics
Graphics Akira Toriyama’s art looks fantastic in high-definition 3D. This even marks a step up from the previous entry, which was already attractive
Sound The classic Dragon Quest music and sound effects are charming. The voice acting and disparate accents can be over-the-top, but it all fits the aesthetic
Playability Characters move and combo attacks well. I never felt out of control, even when I was being overrun by a million slimes
Entertainment Dragon Quest Heroes II is a step backwards from the first Heroes, but represents a solid Dynasty Warriors-style action game. It gets repetitive, but taking on a massive army single-handedly is fun
Replay Moderately high