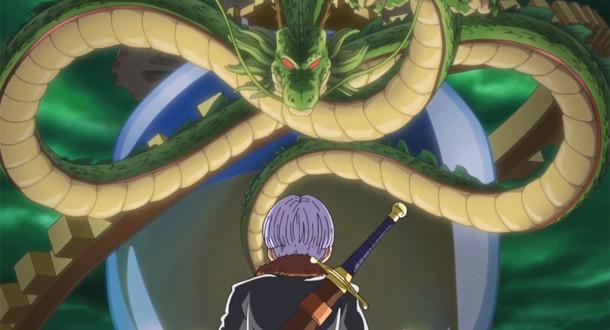 Dragon Ball Z has a good track record in the world of video games, especially when compared to other animated franchises. Some of the games have been undeniable duds, and none of them do much in terms of bringing in the uninitiated, but the good ones are appealing and do a good job of pleasing fans of the show. The latest entry continues that track record by being a solid fighter that is too shallow to recommend across the board.

Players are summoned by the wish-granting dragon Shenron to be part of the Time Patrol, which fixes errors that are mysteriously occurring in the Dragon Ball Z timeline. The premise is flimsy, but being the one who makes sure Raditz gets hit by Piccolo’s Special Beam Cannon, or helps to defeat the Ginyu force is fun. I enjoyed it much more than the standard Dragon Ball Z video game story, which usually just presents the battles you recognize to you without much editorializing.

The premise behind Xenoverse affords players the opportunity to design and play as their own character while revisiting many of Dragon Ball Z’s most memorable moments. Akira Toriyama’s art style is instantly recognizable, and developer Dimps did a fantastic job of retaining that style even when you have the ability to customize your character. I really felt like my blue-skinned Saiyan woman was my own creation, but she still looked like she came from Toriyama’s mind.

Furthering those customization options is the ability to change your equipment and clothing. I love the idea of wearing clothes and accessories I recognize from the show, but you can’t preview what you’re buying from the store. This may seem like a minor complaint, but I wanted to know what I was buying before I did, as the aesthetic of the garment is just as important to me as the stats associated with it. As a result, I would often just buy a bunch of equipment, see what it looked like, and then sell back what I didn’t want at an unnecessary loss.

Xenoverse’s combat and action is flashy, and will be familiar to those who played Battle of Z, but it is still shallow. Special attack options are plentiful, letting you choose if you want to be more of a support, long-range, or short-range character. Regardless of who I played as or what special attacks I used, I never did much more than hammer away at the attack button, fire off a special move, then rinse and repeat. It looks awesome, but is too repetitive to stay interesting.

The online options have expanded from Battle of Z, with versus modes as well as cooperative ones. I particularly enjoyed seeing everyone’s custom characters, but much like playing online in Battle of Z, it’s incredibly chaotic no matter what mode you’re playing. This is great in terms of representing a Dragon Ball Z battle, but not so great for trying to play tactically or getting a good grasp on what’s happening.

Xenoverse stands as one of my favorite Dragon Ball Z video games. I like taking my own custom character into familiar battles from the show, and I enjoy acquiring new equipment as I progress. My character may have looked nothing like me, but I really felt like I was actively participating in the flashy action alongside the familiar cast.

Xenoverse is a solid fighter, but is too shallow to recommend to non-Dragon Ball Z fans.

Purchase More Info
7.5
i
Game Informer's Review System
Concept Take the combat and action established in the last Dragon Ball Z game, Battle of Z, and place it in a structured story with more customization options
Graphics As an accurate emulation of the cartoon visuals, it succeeds, but it does almost nothing with the new-generation hardware
Sound The music is horrible and so is the voice acting – so it basically sounds just like the show
Playability Some minor changes from Battle of Z make controlling the fighters a little smoother, but vertical movement is still tricky
Entertainment The story is silly, but I enjoyed the excuse to revisit memorable moments from the show with a new, sometimes ridiculous lens
Replay Moderately high