The Archdemon is dead, the Blight is quelled, and peace is restored to Ferelden. For a Grey Warden who specializes in saving the world, what else could you possibly accomplish? As a full expansion to Dragon Age: Origins, that’s the question Awakening is called upon to address. Unfortunately, the answer seems to be “not much.”

I’d be the last person to complain about getting more Dragon Age; I still love the core gameplay, so Awakening’s additional quests, skills, and items are all the reason I need to start killing darkspawn again. However, as an expansion, Awakening doesn’t contribute much beyond simply lengthening the time you can spend as a Grey Warden. It feels like a direct-to-video film sequel, shuffling the core components of the Dragon Age world to create a new story in a familiar skin.

With the major darkspawn threat neutralized in Origins, you’re left with clean-up duty in Awakening. By importing your old character or creating a new one, you’ll assume the position of Warden Commander in Amaranthine and deal with the aftermath of the Archdemon’s death. The darkspawn that didn’t retreat have begun fighting each other, and you need to get to the bottom of the conflict and restore order to the region. The premise is cool – especially since you are essentially the feudal lord of Amaranthine – but it doesn’t evolve the basic formula.

All of the features where Awakening could have built on the Dragon Age foundation are sidelined, like the team at BioWare knew where to expand but didn’t have the time to flesh them out. Building up your base at Vigil’s Keep is just a handful of simple upgrades. Governing the region is handled in a single sequence where you mete out justice. Unraveling a conspiracy against your rule is a brief sidequest. Maybe a 15-hour adventure isn’t enough to time to dig into these concepts, but they feel pretty hollow and unsatisfying as implemented.

Despite some disappointments, Awakening is still worth playing for the devoted Dragon Age fan. The tactical combat hasn’t gotten any less entertaining, and the story reveals an interesting twist on the world’s compelling lore. Awakening enriches the universe with new revelations and characters (two of the new party members are particularly awesome), but only makes half-hearted attempts to improve the basics.

7.75
About Game Informer's review system
Concept
More Dragon Age!
Graphics
Why can’t I find a single piece of headgear that doesn’t make my mages look absolutely ridiculous?
Sound
Pretty much the same music and voice actors, all of which are good
Playability
Strategic pause-and-play battles are still the heart of the game, and control as well as ever
Entertainment
Provides the same brand of fun found in the original. Unchanged, but also unimproved
Replay
Moderate 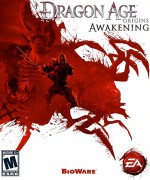