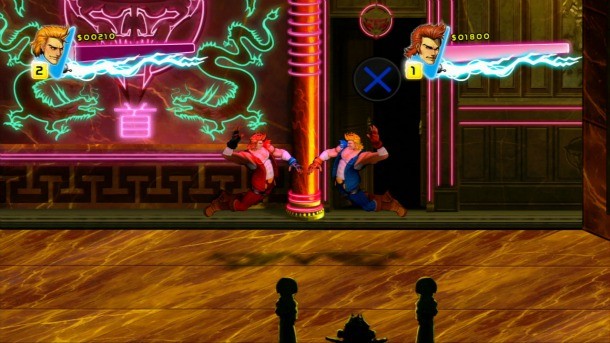 Since its arcade debut in 1987, the original Double Dragon has appeared on countless consoles, inspired a terrible cartoon show and movie, and spawned a mix of excellent and awful sequels. For Double Dragon Neon, WayForward (Contra 4, A Boy and His Blob) and Majesco team up to offer a fresh take on Billy and Jimmy Lee’s brawling adventures while utilizing many classic elements.

You may think you’re playing a remake as you see your girlfriend Marian get punched in the stomach and kidnapped. As is quickly evident, this is not the case – though the classic Double Dragon references are thankfully prevalent. I don’t want to spoil the surprises of where the wild and crazy story goes, but Neon is full of moments that will elicit fist pumps and laughter and is gleefully free of the constraints of reality. The Lee brothers resemble a more ass-kicking Bill and Ted (of Bill and Ted’s Excellent Adventure fame) with their ‘80s surfer accents and propensity for high fives and air guitar. The main villain, Skullmageddon, is a lovably dorky mix of He-Man’s Skeletor and Teenage Mutant Ninja Turtles’ Shredder.

The battle system adds new layers to the classic formula while retaining the signature simplicity. Traditional kick and punch buttons are joined by a separate grab button, which is surprisingly only used for throws. I can’t believe that knees and elbows to the head are off the table here. At least the spin kick is well represented as part of the new mixtape system. Billy and Jimmy can equip two tapes at any given time. One offers a passive boost to stats alongside your choice of stronger weapons, a higher stun rate, and other bonuses. The other “Sosetsitsu” mixtapes are all special attacks that drain your magic bar, including fireballs, lightning strikes, and even a dragon summon. Why did WayForward use mixtapes outside of the retro reference? Each power has a custom song clip, expertly parodying everyone from Depeche Mode to Rick Astley.

The more tapes you collect from fallen enemies, the stronger they get. Mid-level shops allow you to buy specific tapes, and the Tapesmith can boost tape level caps as long as you bring him some Mythril. While I enjoyed experimenting with different tapes, I kept finding myself drifting back to the health absorb and spin kick combo. I couldn’t justify switching to a level two fireball when I could just keep upgrading my already powerful current attack. I wish you could shop in the world map without having to play through a whole old level again, but this isn’t even possible once you beat the game.

Naturally, playing this game with a friend is the way to go. Both players can use their distinct character saves to retain individual progress. If your pal just wants to jump in and not worry about all that, the shadow brother option copies your character build and scores you all the loot. The launch version of Neon sadly doesn’t feature online play, but we’re assured it will be patched in later. I’ll believe it when I see it.

The game’s 10 missions are fun while they last, but some may be let down by the relatively brief campaign (two-plus hours). Long-haulers can sink a bunch of time into maxing out tapes and tackling harder difficulties, but there’s not much outside of that.

The strength of Double Dragon Neon lies in its cartoony homage to the brawler genre and the time period in which the original game released. Some of that charm may be lost if you’re not familiar with the references, but the solid production and mechanics have a universal appeal. 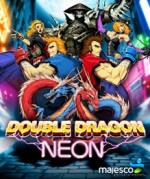 WayForward and Majesco team up to offer a fresh take on the Dragons' brawling adventures.

Purchase More Info
8.25
i
Game Informer's Review System
Concept This is not a remake of the classic Double Dragon arcade game. It’s an all-new take with several references to the series and other classic brawlers
Graphics he hand-drawn look blends with polygonal character models to great effect. I only wish the Abobos’ heads were a little more oversized
Sound The amazing soundtrack touches on practically every ‘80s genre and reimagines several Double Dragon classics
Playability I miss knee and elbow grapple attacks, but the mixtape system adds a new level of combat variety
Entertainment You can tell Neon was created with love for the original games. While brief, the campaign is brimming with nostalgia and laugh-out-loud moments
Replay Moderate