How do you improve a game that has millions of active players, spawned an entire genre, and introduced new words into the gamer vernacular while it was still a mod for a decade-old strategy game? Valve chose not to, instead approaching Dota 2 more like chess. The game itself is sacrosanct and not to be changed, but everything else, from the infrastructure behind online matchmaking to its graphical presentation, is fair game for updates and improvements. The result, unsurprisingly, is a world-class service for a game that is just as brilliant and frustrating as it was when I fell in love with it four PCs and nearly a decade ago.

Just as in the original, two teams of five heroes apiece vie to turn the tide of battle as constantly spawning NPC armies clash at the river that divides the two halves of a symmetrical map. A thick jungle filled with dangerous monsters and secret vendors occupies the space between the three lanes the armies travel along. Powerful towers mark waypoints along the lanes, quickly smashing all but the largest of invading forces. Heroes level up and develop devastating powers as the match wears on, boosting their powers to godlike levels with composite artifacts that cost thousands of gold to earn. Armies and towers that once controlled the map become speed bumps as heroes hunt each other down while battling for control of strategic resources. Eventually, one team overwhelms their rivals through cleverness, teamwork, and skill. Rankings are adjusted, points awarded, and social rewards unlocked in the postgame analysis.

Everything changes in the next match, as 10 players pick 10 different heroes out of the roster of over 100. Friendships form as a strong showing earns you an invite to a recruiting clan. Meta strategies evolve as heroes and team compositions fall in and out of favor from week to week. A popular professional player throws a tournament pool into disarray by choosing an unconventional item progression, and everyone from mid-tier rankings on up scrambles to adjust. If there’s a limit to how far the rabbit hole of skill and strategy in Dota 2 goes, millions of daily players have yet to find it. There is always a way to improve your game. Something as simple as swapping the order in which you purchase two items, or picking up a situational support ability earlier, can have ripple effects across an entire match. The limit at which manual skill can keep improving your results is well beyond human physical abilities; there’s always another creep to last-hit, skillshot to avoid, or area-of-effect to dance out of. Play a single hero in nightly matches for a month straight, and you’ll learn something new as you reflect on the latest game while writing the next rent check.

Because of this unmatched skill ceiling and the lengthy 20-45 minute matches, victory and defeat in Dota 2 are some of the biggest peaks and valleys I’ve ever experienced in games. A well-executed plan to follow up a minor victory with killing the big bad monster and using that to snowball into a win is a major high. Pounding your desk in frustration after being ambushed by an enemy you didn’t notice was missing is painful, doubly so when that screws your whole team over by leaving your lane undefended. With few random elements, the outcome of the match rests entirely on the shoulders of the ten players at their keyboards.

The impossible heights Dota 2 can rise to also creates its greatest flaw: The game is often arcane, indecipherable, difficult, and actively hostile to new players. The wonderful variety in item builds – which potions, weapons, armor, and trinkets you buy in which order and when you combine into what artifacts – comes at the price of a store that takes up half the screen with three tabs’ worth of tiny grids full of unique items. Most of those are useless to your current hero and role (or at least suboptimal, which is practically the same thing in the tightly balanced world of Dota 2). Knowing how to make those decisions requires hundreds of hours of gameplay experience. Reading a dozen or so guides to understand the underlying theory is probably a good idea, while you’re at it.

Navigating the intricate hierarchy of item dependencies and counters is the most intimidating part of Dota 2, but it’s only the first foothills of the expansive mountain range of core Dota 2 competencies. Do you know what a support hero is, what kind of lane partner it should be paired with, and when it’s acceptable to last-hit creeps in your lane? How about the appropriate time to summon the courier, what special ability to expect from the boots that the melee carry in your lane is likely to buy during the laning phase, or why pushing past the midpoint of the river without an explicit reason is a terrible idea? These are intentionally jargon-filled questions, but they’re part of the baseline of knowledge that your team will expect you to have in anything beyond training matches. It’s how Dota players think, because their game is intricate and demanding and because a single weak link on a team spells doom more often than not.

Do not expect a congenial atmosphere in Dota 2 unless you’re playing strictly with people you know personally. The community is often abusive, racist, and hostile. Prepare to be called horrible things for having the temerity to die when piled on by three enemy heroes. Expect to endure a torrent of profanity for buying items considered inappropriate for your character. There are many, many lovely and mature people who play Dota 2, of course, but the vulgar ones stand out more for obvious reasons. While Riot has at least gotten the majority of the poor sports who play League of Legends to at least keep their ill-tempered thoughts out of chat with community ratings and by following through on ban threats, Dota's system has only mitigated the very worst offenders. Ignoring players is easy enough, but the caustic community remains one of Dota 2’s biggest problems.

The entire e-sports package, from spectator mode to tournament integration, is incredible. Extensive support from Valve and other organizations ensures that professional play is here to stay for years. No title makes watching live games, replays, and accessing high-quality commentary and discussion easier than Dota 2.

Choosing between Dota 2 and its competition – primarily League of Legends – is a classic chocolate-versus-vanilla argument. Some players love denial (finishing off friendly units to deny enemies the kill bonus) for making Dota 2’s early game more interesting, others find the absence of the mechanic in LoL a necessary refinement. You may love how the native town-portal ability on every LoL hero changes the idea of in-lane sustainability, while someone else can’t imagine playing without Dota 2’s courier. I find the LoL community’s better behavior to be the tipping point myself, but I have friends who have no problem muting abrasive teammates.

Valve studiously avoided reinventing the wheel with Dota 2, and given how beloved the gameplay is that is undoubtedly the best thing for the game, the community, and the genre. The infrastructure for matchmaking, spectating, and everything else that surrounds actual matches is executed on a level only the best studios can rival. I’ll still be playing and following League of Legends for my multiplayer online battle arena needs, but I can’t find any fault with another player with different tastes choosing Dota 2. 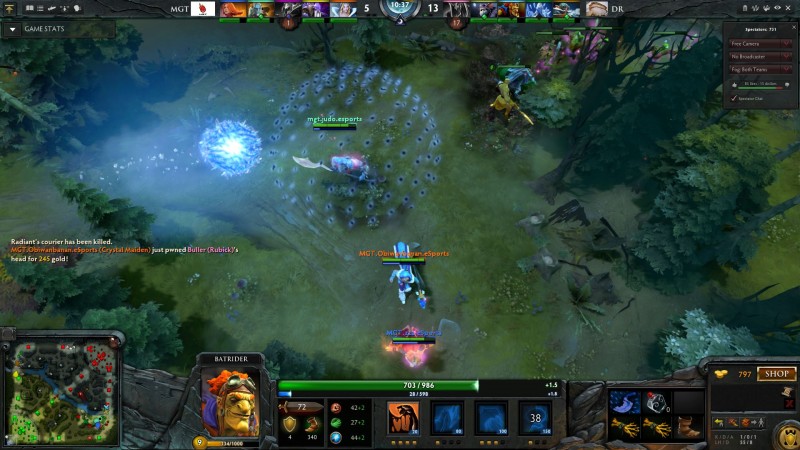 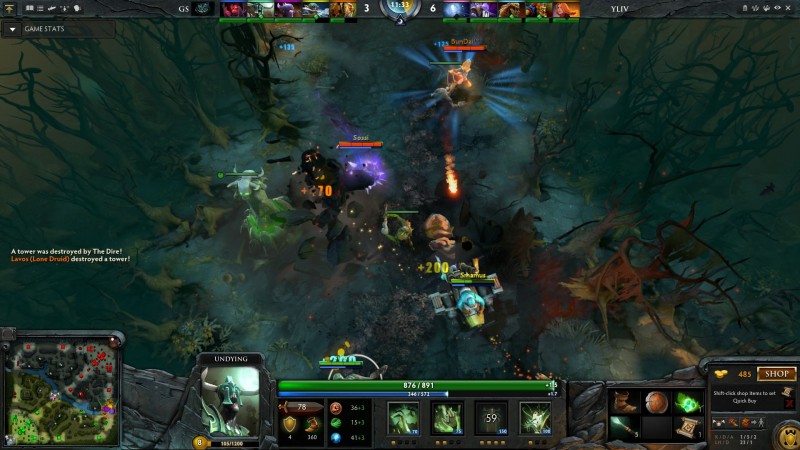 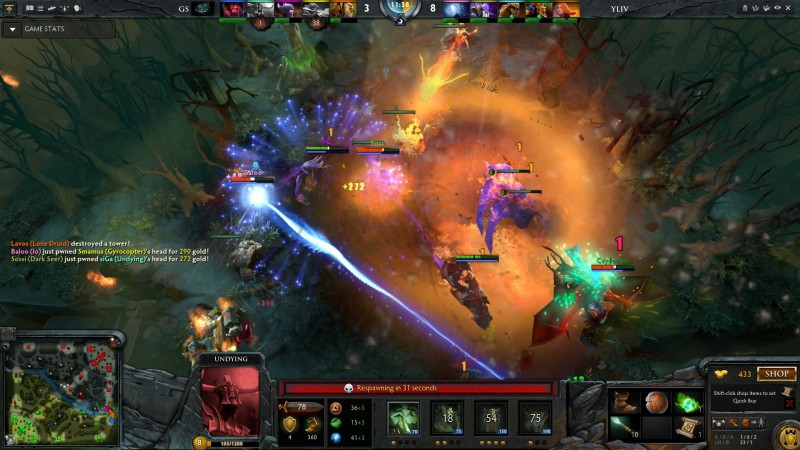 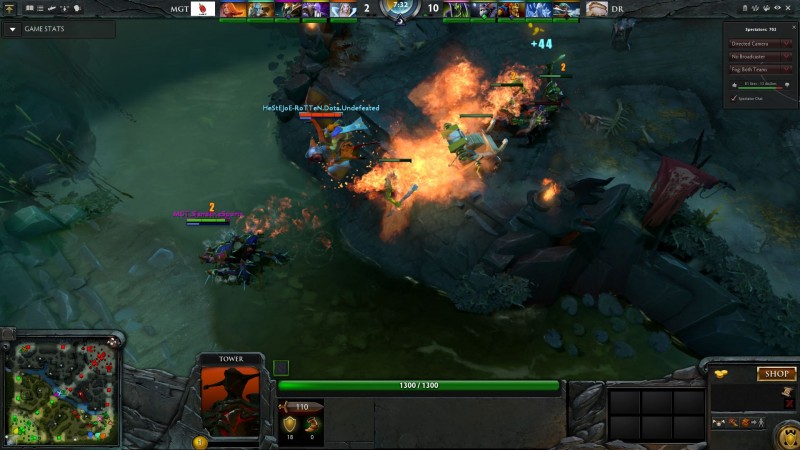 9
About Game Informer's review system
Concept
Build a shiny new wrapper for the Warcraft III mod that started the multiplayer online battle arena genre all those years ago
Graphics
You can only do so much with a zoomed-out isometric view, but Valve does a good job making the furious action readable at a glance
Sound
Someone should build a special Hall of Shame for some of the voiceovers, especially given how often you hear them, but announcements like “top is missing” are great to have in audio form
Playability
Dota 2 emphasizes finicky micro-level control like no other, but it gives you the tools to get the job done. Your mistakes are your own
Entertainment
Valve did an incredible job expanding Dota into e-sports and providing an excellent online backend for matchmaking, ranking, and all kinds of tracking. The design itself retains all of its shining genius and maddening flaws
Replay
High