Some games have names that perfectly encapsulate what the game is about, and Dollar Dash’s alliterative title is one of them. In this is a strictly multiplayer experience; you dash for dollars amidst a chaotic arena of missiles, Jell-O molds, snowballs, explosions, and electric tasers, among many other weapons.

In the titular and most successful mode, players try to collect randomly appearing dollars and transport them to a getaway truck without getting robbed by other players, while simultaneously trying to steal from them. Money, weapons, traps, and power-ups randomly appear in each of the single-screen arenas as players run around like crazed criminals making a break for the getaway car.

The action quickly gets out of hand. Even when the match is going well, Dollar Dash can be frustrating. I kept thinking that if I practiced enough, I could break it down to a tactical experience. But even by grabbing the best weapons and saving the best power-ups, Dollar Dash never quite gets there. Everything happens so fast in the small arenas that building a good strategy is difficult. Firing off weapons in the general direction of your opponents often garners the same result as trying to formulate and carry out a plan.

You can play two other modes besides Dollar Dash, but neither is as interesting. Hit ‘n’ Run features straight-up point-based combat. There is no money to collect; you simply try to hit as many of your opponents as you can. It’s easily the weakest of the three modes. Save the Safe forces players to hold onto a safe as long as they can, like Halo’s Oddball. This mode fares better than Hit ‘n’ Run, but it has balancing issues. The player holding the safe experiences no diminished capabilities, meaning you can grab as many weapons and power-ups as you could before picking up the safe; it feels less like a game of keep away and more like a game of grab the rockets and hope you’re holding the safe.

Each of the maps are distinct from each other, and despite some overlap, many maps are exclusive to each mode. Some are open arenas, while others force players along a specific path to deliver their dollars. One map has incredibly annoying fog that I was happy to never play again after experiencing it once.

Permanent power-ups are available for purchase as you earn money. You can also buy avatar items like assorted hats and hairstyles that do nothing to affect your stats, but do help differentiate you from the chaotic crowd that forms during each match. Getting lost in the shuffle is easy if you’re not wearing some kind of crazy Mohawk or pirate hat. The unlockable items encourage you to keep jumping into games, but I never discovered anything excited me enough to start saving up.

Dollar Dash is a simple experience with only three modes. Each level is unique, but the combat feels shallow. Fun can be had in the chaos, making it decent to pick up and play for a few matches, but it lacks lasting appeal…unless you’re really into novelty customization items like afro wigs and aviator sunglasses. 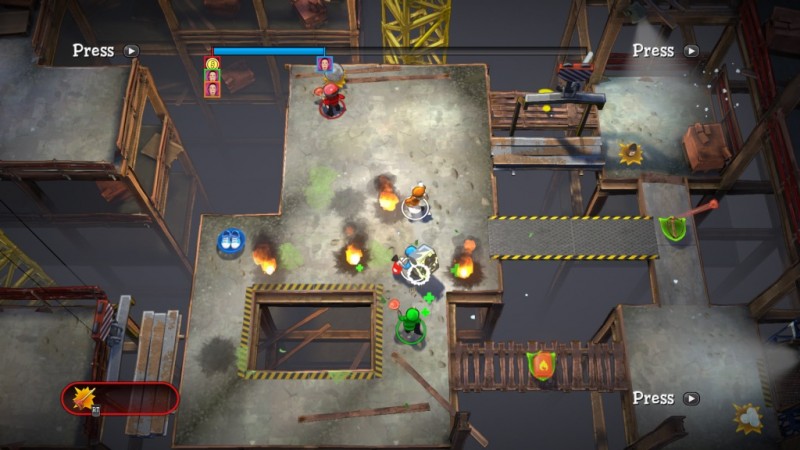 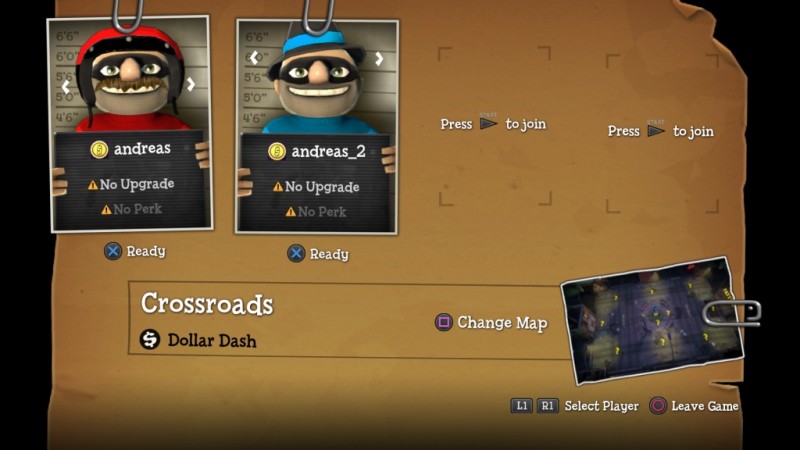 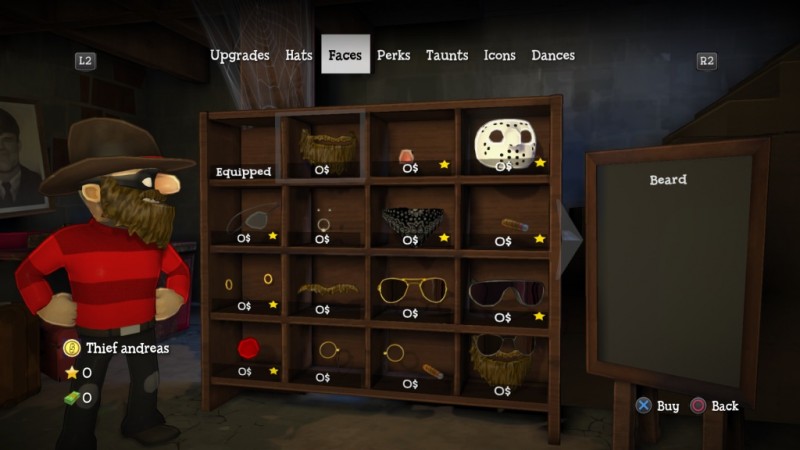 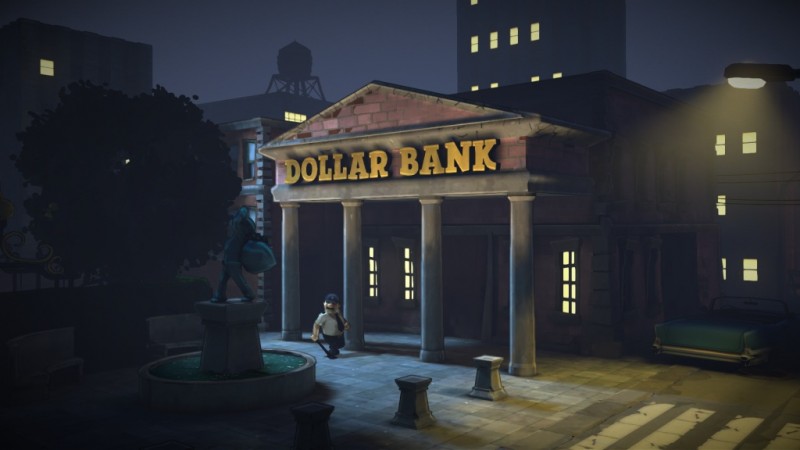 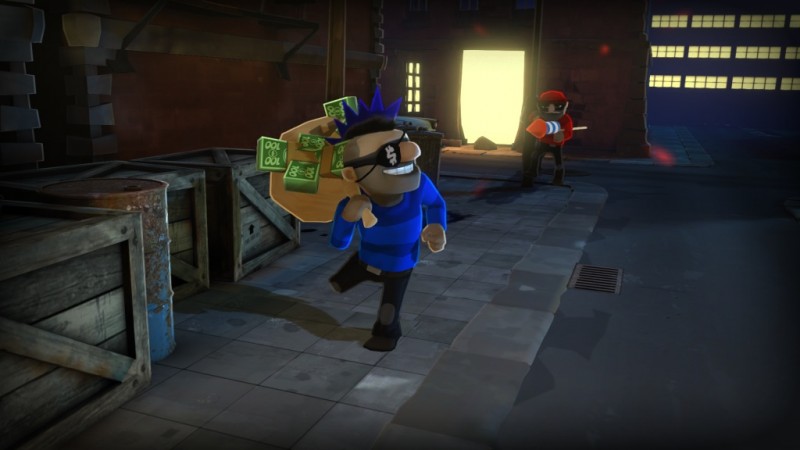 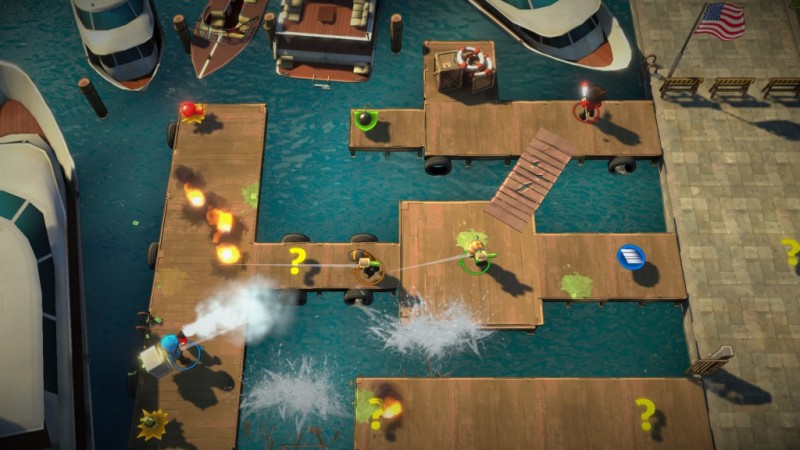 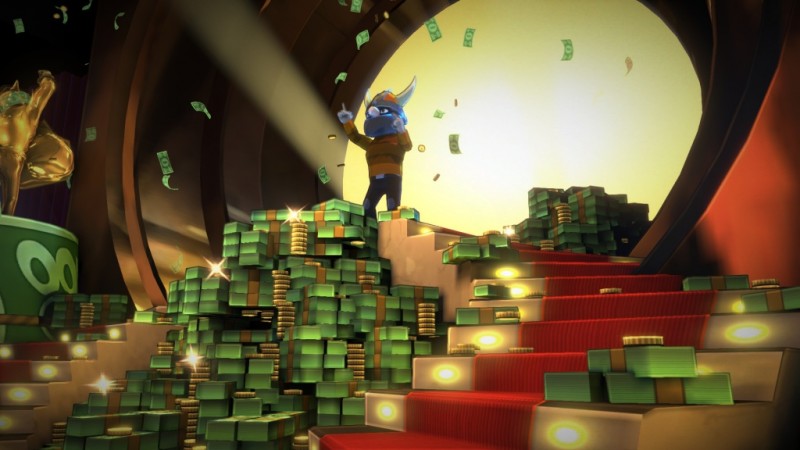 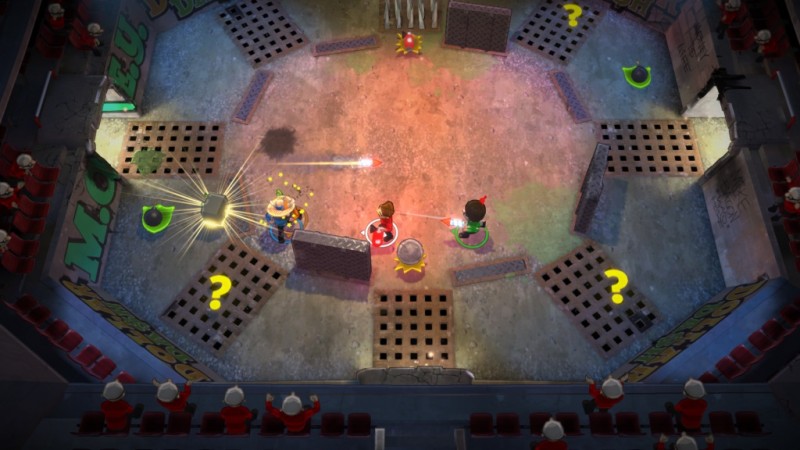 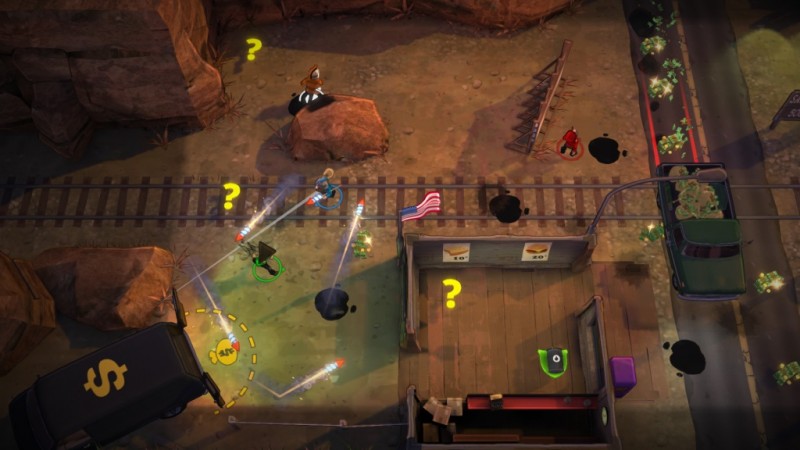 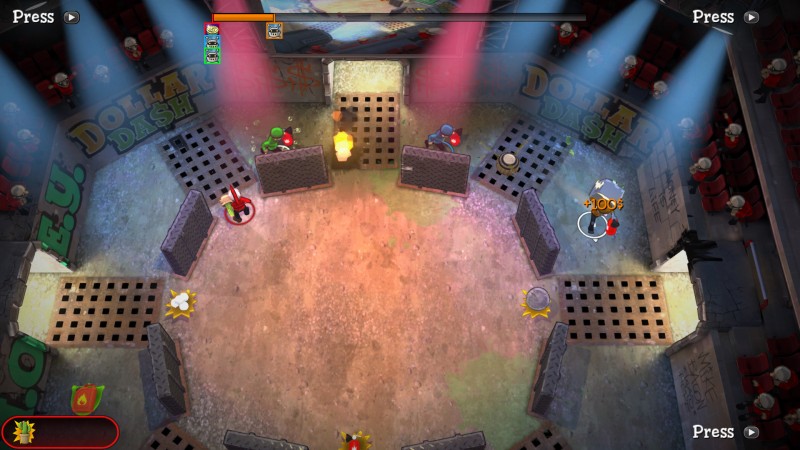 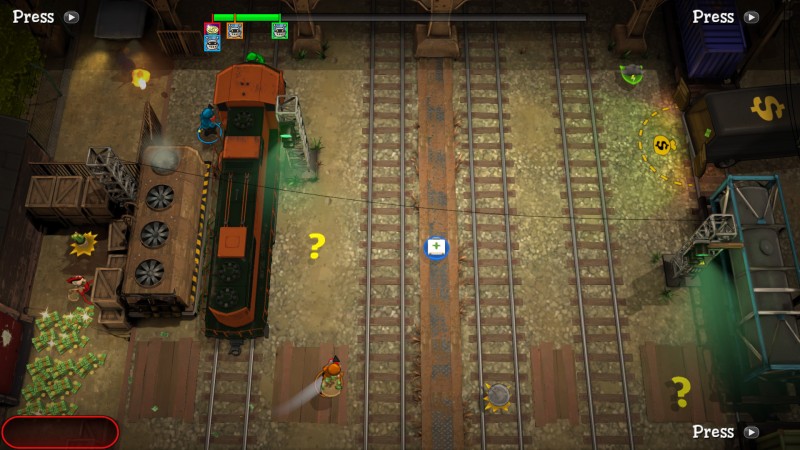 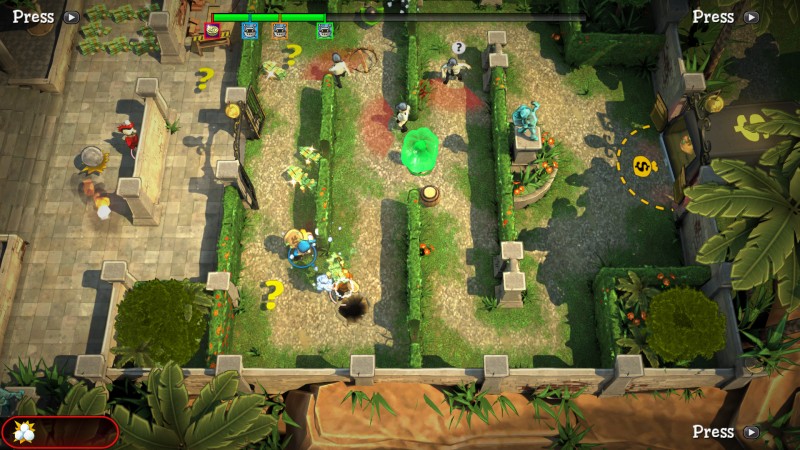 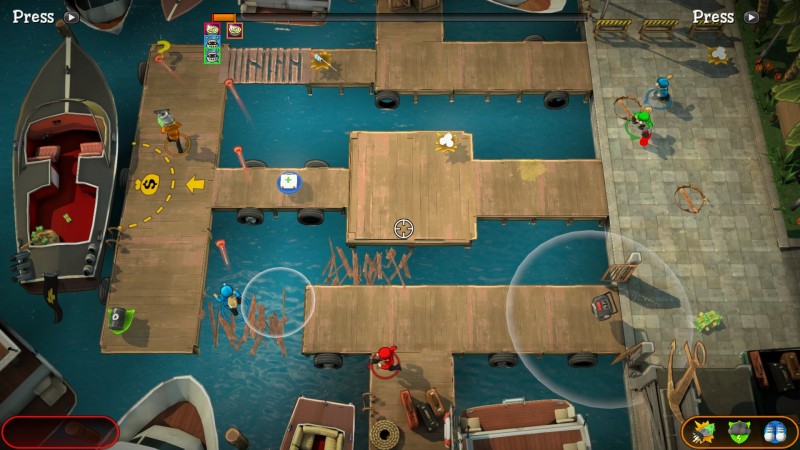 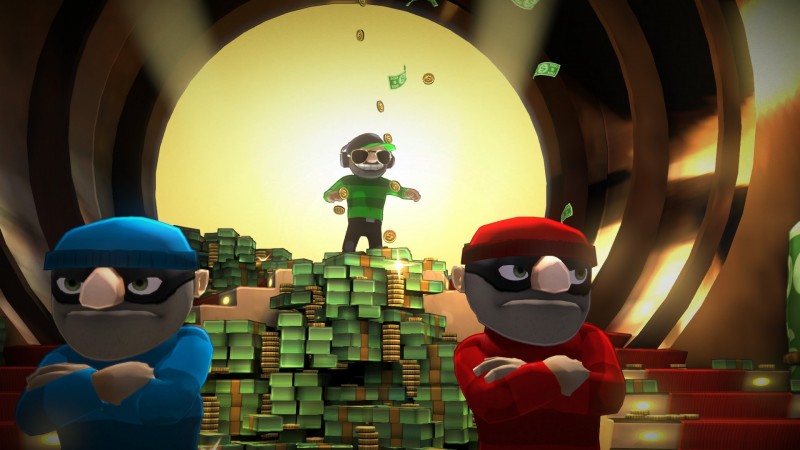 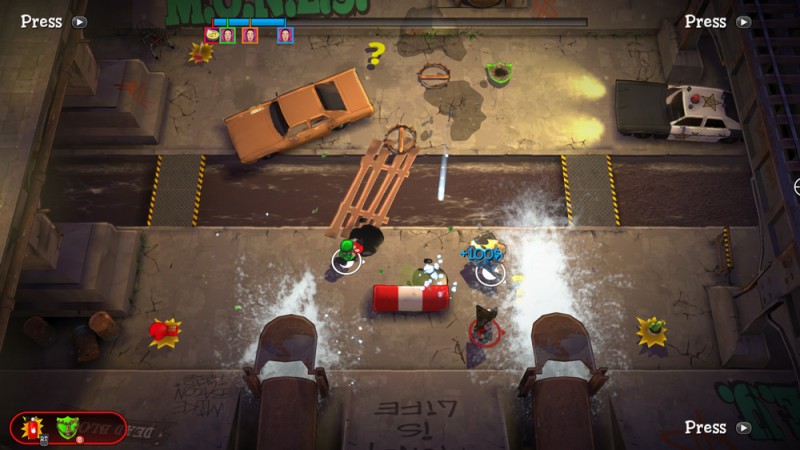 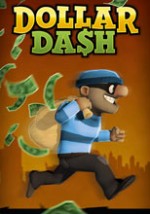 Dollar Dash is decent to pick up and play for a few matches (especially with friends by your side), but it lacks lasting appeal.

Purchase More Info
6
i
Game Informer's Review System
Concept Fight for dollars in single-screen multiplayer arenas, collecting as much money and as many points as you can
Graphics A simplistic and attractive art style creates memorable character avatars, but forgettable environments
Sound Jazzy, fretless bass-heavy music recalls classic heist movies with sneaky criminals, and sets it against chaos in a way that works
Playability The onscreen action gets crazy quickly, but the twin-stick shooter gameplay never lets you down
Entertainment Even when you’re winning, the action gets out of hand to the point of frustration
Replay Moderate