I land my winged hamburger onto the planet’s surface, and my robot lumberjack dismounts. After a quick scan, I see that one of the insectoid inhabitants is carrying a present. I try to get on its good side, summoning what I think is an object that the creature will appreciate: a stack of pancakes. This angers Big Bug, as he wants nothing to do with breakfast. I also learn that he hates birds (for more obvious reasons, perhaps). Eventually, he gives me the present in hopes that I’ll go away. I still have much to learn.

Doki-Doki Universe is all about these types of little interactions. Over the course of your adventure, you and the robot, QT3, learn more about what makes insects, animals, and people tick. Most interestingly, you might actually learn a few things about yourself – or have your suspicions confirmed.

The setup is simple: Your bot is abandoned on a tiny spherical asteroid. A little green alien in a UFO swings by and says that your model has been rendered obsolete and is destined to be turned to scrap. The alien says that QT3 lacks humanity (unlike other models), making him ill-suited to work with people. There is hope, however. The alien is willing to guide QT3 and the player across the universe, stopping at a variety of planets to learn important lessons on subjects including devotion, jealousy, and prejudice.

QT3 is a helpful little fellow, which means he’s already one step ahead of a toaster oven. He walks through brightly colored 2D worlds, meeting new characters along the way. Most of them have problems. Humanity or not, it’s a wonder that QT3 is in danger of being destroyed. He can summon objects just by thinking about them, which is the primary way that he and the player work things out on each planet.

For example, characters may feel that they’re in danger of being eaten by a sea monster. After talking to the sea monster on an underwater planet, I learned that his name is Michael (being called “sea monster” hurts his feelings), and that the only reason he kept chasing everyone’s pets was because he wanted to pet them. Armed with that information, I went back to the group and we decided that if Michael had a pet of his own, things would be better. From there, I was tasked with summoning up something that was large and lived in the sea.

Summoning is similar to how it works in Scribblenauts, though it’s different enough to seem fresh. In Scribblenauts, players write down words to bring them into the world. In Doki-Doki Universe, objects are represented by little pictograms in bubbles. Select the one you want, and QT3 pulls it into existence. The interesting bit is that only 20 objects appear in your inventory at a given time, from a total of 330. When I tried to pull up a whale for Michael, none of those 20 bubbles included a whale. There was a snail, however, and I clicked a button to bring up 20 bubbles that were similar to the snail. Alongside various bugs and creatures was the whale. It’s a clever system, since objects are classified by multiple fields that are invisible to the player. Hitting “try similar” on a yellow chick will not only bring up other birds, but the sun, a yellow dog, and a robot egg. If you hit a dead end, you can also just tap a button for a completely randomized selection.

Solving problems earns you presents, which can include new summons or objects to customize your home planet. You can also get presents by either getting on people’s good or bad sides, depending on the individual. To do that, you pull up objects that they like or admire, in the case of Big Bug and breakfast, abhor. You can brute force your way to those extremes by pulling up objects at random, but it’s far more efficient to speak with other characters to learn more about their idiosyncrasies. Some of those preferences are amusing, like a talking flower’s admission that poop is a guilty pleasure, or Dr. Therapist’s equal dislike of boys and girls. Dr. Therapist is a bit of a crank, but he provides some of the most interesting material in the game. In addition to landing on planets, you can land on tiny asteroids and take personality quizzes. These are short – usually three or four questions at most – and they aim to show what kind of person you are, in broad strokes. As you complete more of these quizzes, however, Dr. Therapist invites you home, where he provides a more intricate look at you as a person. I doubt the results would hold up in court, but I found them to be an accurate glimpse of who I am.

I had a good time interacting with the various characters I met, thanks in large part to the sharp writing and unusual presentation. Everything is rendered in doodles with charming animations. I’ve never seen such a cute depiction of vomit, for instance. Some might look at the game and dismiss it as something for kids. On that front, they’re right. This is a great game for younger players.

It isn’t often that we get to play games that reward traits like compassion and empathy, and I found Doki-Doki Universe’s cheerful optimism refreshing. I played a bit of it with my son, and he enjoyed the silly scenarios (what six-year-old wouldn’t love a planet made of poo?). I appreciated that it gave us some natural starting points for conversations about bullying and pride. We played it in a few smaller sessions, which is probably the best way to play the game.

The pattern is monotonous in larger doses, since you’re essentially repeating the same object-fetching tasks over and over again. As you proceed, your inventory gets larger, which makes managing it a more time-consuming task. In an aggravating spin, QT3’s summons occasionally backfire, bringing up a completely unrelated object. It’s not the end of the world, but I thought it was annoying to sort through several layers of summons only to have my efforts wasted at random.

HumaNature Studios has created something genuinely good-natured and charming with Doki-Doki Universe. Even though elements get tedious, it was overall a welcome change of pace from the ordinary. 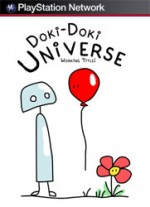 Over the course of your adventure, you and the robot QT3 learn more about what makes insects, animals, and people tick. Most interestingly, you might actually learn a few things about yourself

Purchase More Info
7.5
i
Game Informer's Review System
Concept Learn about humanity – and yourself – as you guide a robot through an interstellar adventure
Graphics QT3 and the creatures he encounters look like something a proud parent would display on the fridge. Everything is rendered with a love-it-or-hate-it, doodle-like style.
Sound A few of the jams sound like outtakes from ToeJam & Earl, and they’re highlights in an otherwise unremarkable soundtrack
Playability Sorting through your inventory of objects is easy, which is critical since that’s the bulk of what you do
Entertainment The simple gameplay may be a turnoff, but Doki-Doki Universe emphasizes important qualities like empathy and communication that everyone should appreciate
Replay Moderately low