People like to disparage sequels, but the truth is they are often a great opportunity for developers. You’ve built a strong foundation, but a number of obvious flaws in the first game can be easily corrected. Also, you’ve probably got a list of great features that you didn’t have the time or budget to implement in the first game. DJ Hero was my favorite music game of 2009, and I’m happy to report this sequel bests its predecessor in nearly every way.

The big innovation here is the new freestyle segments. Previously, these had been limited to a small handful of samples you could deploy with the middle turntable button. They were mostly lame, so everyone I knew ended up using Flavor Flav’s “Yeeeeaaah boy!” exclusively. Now, the samples are tailored to the track, often singling out a cool element or sample that you can use to enhance the beat. Developer FreeStyle Games also added freestyle scratching and freestyle crossfading sections. Freestyle scratch lets you scratch your own rhythms, adding a cool element of creativity to the mix. Freestyle crossfade lets you bounce between the tracks at will. For example, you could isolate an acapella vocal, then suddenly slam back to a bruising techno beat. The game grades you on how musical and unique your freestyles are, transforming what previously felt like a corny gimmick into an integral part of the experience. I really felt like I was helping craft the mix, not just hitting buttons in time. Speaking of button presses, DJ Hero 2 also features new “held” notes, much like those from Guitar Hero – yet another nice addition to the gameplay.

Notable in their absence are the guitar/DJ duet songs, and thank God. I never found that mode much fun, and it resulted in precious track slots being devoted to terrible rock/hip-hop mash-ups. I’m glad they are gone. However, the new vocal mode (which uses a DJ Hero or GH mic) isn’t much better. The vocal lines are so cut-up, scratched, and jumbled that it feels like playing karaoke game in the grips of a seizure. Still, it does no harm, as it’s just an addition to the songs that are already there in the first place. And who knows? Maybe someone less curmudgeonly (or more inebriated) than myself will have some fun with it. On the other hand, I enjoyed all of the two-turntable multiplayer modes.

The mixes themselves are almost uniformly great, so the hit-to-miss ratio this time around is much better. I won’t bore you with listing all of them, but the track list expertly balances superstars like 50 Cent, Kanye West, and Lady Gaga with respected producers like DJ Shadow and Chemical Brothers, plus outstanding tracks by lesser-known artists. While there’s still work to be done (a more meaningful career mode and some sort of mix creation tool would be great), at its best DJ Hero 2 is positively thrilling. As you crossfade, scratch, and manipulate the gorgeous mixes, the feeling is akin to riding the perfect wave. In some ways, I almost feel a greater connection to the music than I do when playing the guitar-focused games on the market. Hopefully this game will meet the success it deserves, allowing FreeStyle Games to keep searching for that perfect beat.

9.25
About Game Informer's review system
Concept
Make some smart gameplay improvements to an already great music title
Graphics
The presentation is much better – the clubs are impressively detailed. Still has stupid characters
Sound
Exceeds the first game’s tracklist in both quantity and quality
Playability
New freestyle segments for nearly every aspect of gameplay makes this feel even closer to the real thing
Entertainment
With all due respect to Rock Band 3, this is my music game of the year
Replay
High 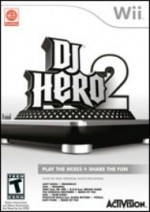