Activision has taken a lot of heat in gamer circles for its perceived shameless exploitation of the Guitar Hero franchise. A lot of gamers have been more sympathetic to Harmonix (the originators of both Guitar Hero and Rock Band), a stance reinforced by the company’s classy handling of its DLC catalog and The Beatles: Rock Band, especially in contrast to Acvitision’s botched handling of Kurt Cobain’s likeness in Guitar Hero 5. Against this backdrop, DJ Hero is an even more impressive feat of game development. Not only does it succeed in being much more than a cheap cash-in on the “Hero” brand, it’s the most innovative and inspired new music title since the original Rock Band.

While the basic “gems and runway” onscreen display reflects the tradition of Guitar Hero, the gameplay and the new turntable controller transform the template into something radically different. The turntable and its three face buttons handle the cuts, scratches, and rewind effects that cascade down the three-track runway. But the real challenge comes from using the crossfader to switch rapidly between different samples when a track makes an immediate left or right turn on the two outside tracks. At first it’s like trying to rub your belly and pat your head at the same time, but the learning curve should be manageable for most music game fans. However, some expert Guitar Hero players will have to swallow their pride and start on the medium difficulty. For this reason, the entire game plays in “no fail” mode. Some hardcore players might balk at this, but I think it was the correct decision. Still, perhaps it would have been wise to at least include a mode that allows you to fail for the expert set.

The gameplay is exhilarating, providing the illusion that you are in command of the mix as you juggle beats, lay down scratches, squelch frequencies with the knob, and interject custom sample sound bites in the freestyle sections of the track. The game transforms on higher difficulty levels, as added directional scratches lend the game another layer of complexity. My only small complaint is I wish the crossfader control had a stronger “notch” in the middle, making it easier to find the default position during hectic sections.

Musically, this is the most adventurous music game released to date. Instead of a simple tracklisting of classic rock tunes, these fresh mixes offer an entirely new listening experience. Familiar tracks are blended with obscure DJ cuts to often thrilling results. In DJ Hero, the delicate ‘60s psych of the Zombies is melded with Chuck Brown’s go-go classic “Bustin’ Loose,” while jazz producer David Axelrod gets down with Eric B. and Rakim’s hip-hop epic “Eric B. is President.” Finally, a music game that’s not simply regurgitating the past, but transforming it. While the mixes sometimes rely too heavily on pop hits or well-known artists, the soundtrack feels remarkably true to the cut-and-paste aesthetic of DJ culture.

As might be expected in a game that tries to do so many new things, not everything works. A few mixes, like DJ Yoda’s awkward mash-up of “Tutti Frutti” by Little Richard and “Beats” by Shlomo, sound like audio car crashes, leaving you feeling confused by the jumble of edits and hyperkinetic scratches. Other times, it’s clear that marketing has taken precedent over artistry. The Jay-Z set is a disappointment, eschewing classic early Jay breaks for inferior latter-day material. The freestyle samples – brief soundbites that can be deployed with the middle button – are fairly corny, and often do little but disrupt the groove. Also, the guitar-and-DJ multiplayer duets are more novelty than fun, though perhaps this can be improved with better DLC in the future.

The presentation is also a mixed bag. While the graphics and impressively rendered environments are state of the art, the horrible character designs that we’ve come to expect from Guitar Hero continue to annoy in DJ Hero. From stripper-like females to faux “rednecks,” there’s not a dumb stereotype these fuggly Muppets don’t cover. Thankfully, you can unlock a good number of genuinely respected real-life DJs like Grandmaster Flash, DJ Shadow, and Jazzy Jeff – although DJ AM’s bio weirdly neglects to mention the fact that he recently died.

Despite these complaints, I’m hooked on DJ Hero. In many ways, it feels like a new beginning for the music genre. Freestyle Games has pulled off an impressive trick, crafting a game that holds true to its sister franchise while at the same time putting a unique spin on both the gameplay and the music. This is a great start, and I hope that Activision follows through with robust DLC support. With so much of the classic rock catalog depleted, this genre needs to look to new and creative ways to keep the experience fresh. DJ Hero is a great first step.

9
About Game Informer's review system
Concept
Brilliantly reinvents the “falling gem” formula with amazing cut-and-scratch gameplay and a well-built turntable peripheral
Graphics
From a technical standpoint, the graphics are solid, but will we ever see an end to the hideous character designs that plague Activision’s music games?
Sound
More than just a great selection of tracks, these all-new mash-ups and remixes put a new spin on old favorites and obscure gems alike. Very inspiring stuff
Playability
Even veteran Guitar Hero players will have a learning curve, but mastering a new gameplay style is an exhilarating experience
Entertainment
While The Beatles: Rock Band and Guitar Hero 5 chronicle rock’s past and present, this game feels more like the future of the genre
Replay
High 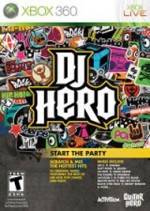