Combat and character development separate role-playing games from the adventure genre. Divinity II: Ego Draconis would have been better off as an adventure game. Its world and background fiction are top-notch, expertly fleshed out by dozens of in-game books and extensive voiced dialogue. The third-person action, on the other hand, is designed and implemented so poorly that every encounter is a chore.

The care poured into the setting is evident in the art as well as the rich, detailed fiction. The extensive world is crammed full of little touches, from skeletons jutting out of ancient cave-ins to bloodstains in a torture chamber that horribly detail the order in which the devices were used. Every house, every mini-dungeon, and every abandoned shrine in the wilderness has its own story. The game does a fantastic job of not holding your hand and letting you explore on your own terms. This strikes a great balance between the large but often soulless expanses of Oblivion's Cyrodiil and Dragon Age's small but meticulous areas.

The price you have to pay to take in these wondrous sights can be steep. The hack n' slash combat is little more than hammering on your primary attack while interjecting special moves when they're off cooldown. You'll spend the majority of your combat time locked into animations. Balancing is completely off; every boss fight I came across required several reloads to pass. One boss could consistently two-shot my character with a bow – and that's with all my stat points spent on ranged defense and hit points! Combat isn't tactically interesting, either. You'll most likely use between two and five abilities for the entire game.

Turning into a dragon has been touted as a big selling point, but it results in gimmicky one-off sequences rather than a revolution in the gameplay. Likewise, customizing your own Battle Tower to serve as a home base ends up being little more than a convenient collection of vendors. Building your own undead creature from the body parts of fallen foes is neat, but nowhere near enough to salvage the combat from mediocrity.

The game's content is identical on both platforms, but Divinity II's many technical flaws are exacerbated in the transition to the console. Frequent framerate stutters are the least of the 360 build's problems. Interacting with objects in the world is a needless frustration since there is no additional collision beyond your single-pixel cursor and the model of your target. Consider trying to pick up a small key from a cluttered table: fixing on a three-pixel-wide object with the analog stick is horrible. This isn't a complete disaster of a port, but Divinity II is a noticeably inferior experience on the Xbox 360.

Divinity II isn't without its charms, but weak game design sullies the thrill of digging into the many secrets of its outstanding world. 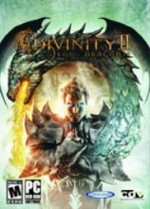 The game's content is identical on both platforms, but Divinity II'smany technical flaws are exacerbated in the transition to the console.

Purchase More Info
6.5
i
Game Informer's Review System
Concept Explore a richly detailed fantasy world in your quest to become a dragon and stop an ancient evil
Graphics Environments are fabulous, but a mere half-dozen faces for each gender and wonky animations make the people less of a draw than the setting
Sound The content-appropriate score does its job, and most of the extensive voice work is solid
Playability The control itself isn't bad, but horrific balancing will make you curse
Entertainment The sense of discovery imparted by journeying through Divinity II's world is grand, but the action is passable at best
Replay Moderately Low