At the onset, Divekick is as simple as a fighting game could be. There are no complicated directional inputs and only two button commands: dive and kick. The first to land a hit wins the round. It’s an interesting approach to accessibility that makes it an easy sell to those that typically shy away from complex fighters. But just beneath the freewheeling, goofy exterior of Divekick is a layer of complexity that might scare off newcomers as fast as it brought them in. Once the concept of diving and kicking has set in, new questions arise. What are those meters for? Why is this guy teleporting? How come you can jump backwards?

Divekick’s roster includes 13 absurd characters that serve to lampoon fighting-game tropes or parody notable figures in that community. It’s a diverse group with very distinct play styles. Aside from the obvious differences in dive speed or kick angle, each character has two special moves ¬– one on the ground and one in the air. Pressing both buttons simultaneously executes your special, which depending on your character, may have you hover in the air, shoot a fireball, or even parry an incoming attack. But even the properties of the basic diving and kicking are specific to each character. Fighting-game veterans will welcome the unexpected depth, but newcomers will have a tough time wrapping their head around some of the mechanics.

The story mode helps flesh out the ridiculous cast. The humorous storyboards tell each fighter’s tale, but gamers likely won’t be spending much time in Divekick’s single-player mode. Divekick shines the brightest in local multiplayer, which is a blast.

If you can’t find a partner within arm’s reach, Divekick does offer minimal online play. Don’t expect to get a large lobby going with your online friends – Divekick’s definition of a lobby is a room of two people. Technically, two people is a group, but it’s not exactly a party. Direct invites are impossible; creating a private lobby merely opens up a spot to anyone on your friends list, but they have to search for it specifically while in-game. Both ranked and unranked matches are offered, but again, without a local group of people to play with, Divekick loses most of its appeal.

Divekick is saturated with inside jokes and parody from the fighting-game community. For example, one of Mr. N’s win poses mimics an incident in which his real-life counterpart, a pro gamer named Marn, unsuccessfully attempts to put his arm around a female interviewer. The exchange isn’t all that amusing on its own, but knowing that this really happened makes it worth a chuckle. That type of humor is consistent throughout. It doesn’t necessarily alienate those who aren’t in on the jokes, but without context, it just comes across as odd.

In the right environment and with the right people, Divekick offers some fun. But the lack of online lobbies drastically limits those opportunities. Like most novelties, the fun of Divekick is short-lived. 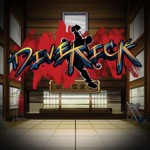