Playing through Disney Universe reminded me of Disneyland’s own It’s a Small World ride. My initial exclamations of “aww” gave way to “AHH!” after enduring the same cutie-pie shtick on repeat. Even though the lyrics may change slightly, it’s the same cloying tune over and over and over again.

In the game’s world, Disney Universe is a virtualized version of a Disney theme park, giving players a chance to explore familiar settings and visit with friendly faces from some of the company’s biggest franchises. Before the friendly computer guide can finish with the introductory tour, the game inside the game is infected by a cybervillain named HEX. The formerly idyllic world is now home to nefarious AI villains. It’s the player’s job to set things straight by beating the ever-loving bits out of the bad guys.

When it was first revealed at E3, Disney Universe drew comparisons to LittleBigPlanet. While it may share a similar aesthetic if you squint really hard, it has more in common with Traveller’s Tales series of LEGO games. At first, there’s a lot to like. The characters are delightfully cute, with dozens of different familiar costumes. The settings incorporate a who’s who of classic Disney properties. The Lion King! Aladdin! Pirates of the Caribbean. Wall-E? Eh, close enough. The gameplay is pretty basic stuff, but it has to get better. Right?

Unfortunately, what you see is largely what you get. Each of the different worlds offers obvious cosmetic differences, but the overarching gameplay is largely unchanged between them. Sure, a ﻿“key” may take the form of a lamp or a sword or a sword swallower (don’t ask), but the functionality is identical. Punch the bad guys, kill the bad guys, unlock the latest barrier, move forward a little bit. The few gameplay variations (arcade games within a game about a game!) are cute, but they’re about as interesting in the long run as a 30-second Mario Party minigame. While I’m all for a little hand-holding, Disney Universe takes helping the player to ridiculous extremes. Blue arrows point players to their next immediate objective, reducing what puzzles there are to simple fetch quests.

Disney Universe gets more interesting when you grab three friends (or kids) and play together, but so does just about everything. There’s a nice little competitive element in the game, and players can sabotage their friends’ efforts by hoarding power-ups and triggering traps. That said, the game is so shallow and repetitive that only the most easily amused will be able to slog their way through to the end credits, with or without companionship. 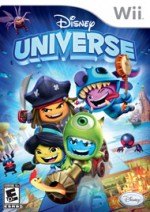 Disney Universe is so shallow and repetitive that only the
most easily amused will be able to slog their way through to the end
credits, with or without companionship.

Purchase More Info
6.5
i
Game Informer's Review System
Concept Let families roam around a virtual theme park, defeating glitches and saving the day
Graphics Cuter than a railroad car full of puppies
Sound Squeals and grunts are layered atop generic-sounding riffs
Playability The gameplay is basic enough for a child to grasp, with a similar level of depth
Entertainment You’ll see nearly everything that Disney Universe has to offer in an hour or so, though the game drags on much longer
Replay Moderately low