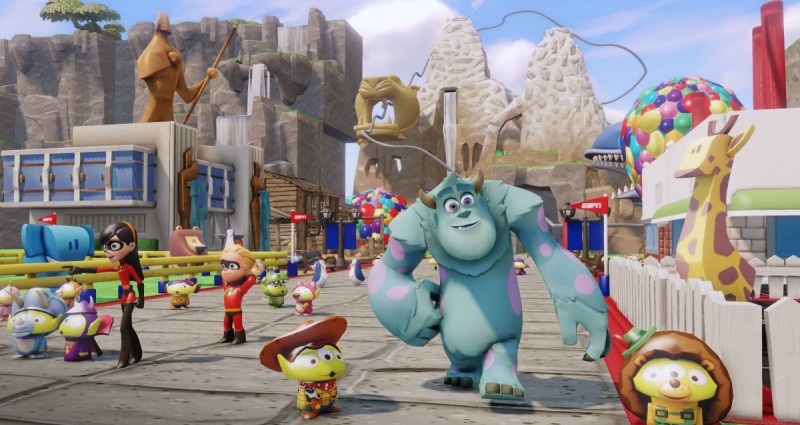 Pixar’s Toy Story movies give us a good look at two very different children and their playing habits. In one house, we see Andy. He’s a goodhearted kid who takes great care of his toys and is heartbroken when his favorites break. In the house next door, we have Sid. This disturbed little monster conducts experiments on his toys. In Disney Infinity, the latest video game that can only be played if an action figure is placed on a portal, we are given the chance to channel our inner Andy or Sid.

We can create our own magical worlds for our action figures, or use them as cogs in violent Rube Goldberg machines. Both of these play styles generate thrilling moments, but only if we use our imaginations to enable them.

Captain Jack Sparrow, Buzz Lightyear, Lightning McQueen, and many of Disney’s recognizable characters are a part of Disney Infinity, but they aren’t the stars. The show stealer is a mode called Toy Box.

Toy Box is a construction set where worlds can be created, played within, and shared online. If Minecraft is the Lego of video games, Disney Infinity is the Duplo. Houses, castles, and most of the components are pre-built. The color and texture of many of these objects can be altered, but that granular level of sculpting them to exact specifications is not available. Creativity is tied to how these pieces are used in the context of playing with them. Uncle Scrooge’s vault may look cool on its own, but it takes on a whole new life when you try to jump cars over it, or construct a series of tricky spinning platforms leading up to its roof (where access to its fortunes awaits).

The creation tools are designed with simplicity in mind: Grab a desired object and place it in the world. An effective color-coding system shows when items are overlapping, touching flush, or floating freely. Generating dense forests or city blocks only takes a matter of minutes, but designing an enjoyable racetrack with a defined start, number of laps, and finish (complete with fireworks signaling a winner) requires a deeper understanding of how to make items interactive. Most of these actions are surprisingly easy to grasp, allowing for a wide variety of play within the world.

From the outset, the Toy Box doesn’t offer all of the items you can use. This is where you feel the hand of Disney’s marketing department, as it pushes the player to try other modes and – if you want to make your Toy Box as deep as possible – purchase more figures and play sets to unlock more stuff. You'll frequently run into boxes you cannot open unless you have specific characters. Some of these boxes are tied to characters that aren't available for purchase yet. 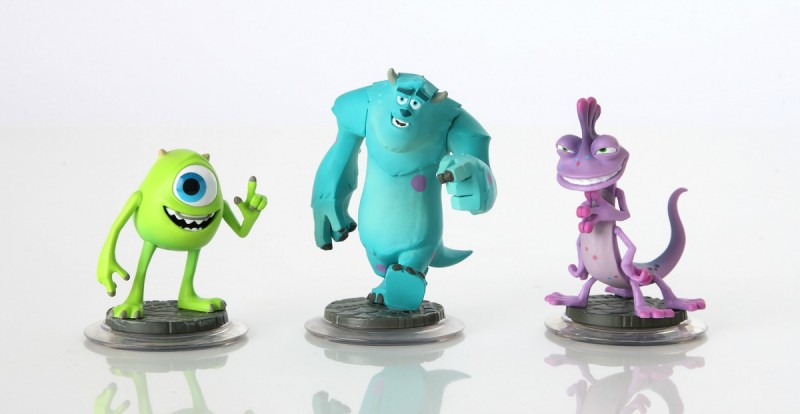 Disney Infinity's Starter Pack allows for co-op in Toy Box mode. To play co-op in the starter play sets, additional figures from those universes must be purchased.

A bevy of hidden Toy Box items are scattered throughout the Incredibles, Monsters University, and Pirates of the Caribbean play sets that are included in the base game. Each play set is a standalone adventure offering roughly three to six hours of open-world missions. Monsters University is the weakest of the bunch, focusing on repetitive fetch quests and collecting widgets, but Pirates and the Incredibles do a nice job of mixing up the gameplay and throwing fun challenges at the player. Pirates' open world sailing is particularly impressive, and is better played with a friend who can man the cannons as you chart a course across the dangerous seas to islands hopefully holding treasure and more Toy Box pieces. The play sets, when done well, are another great avenue of play. Monsters University's missions are a tad irksome, but plenty of excitement comes from exploring the campus and scaling its buildings to find hidden goodies.

Adventure mode is where most of Disney Infinity's red flags are found. Here, each character is tasked to complete a unique challenge to unlock a gold, silver, or bronze medal. Some of these goals are incredibly difficult, and calling upon a friend can make them even harder, as each player is tasked to collect their own set of orbs, yet are going after the same ones. Good luck to all of the completionists out there who are going for all of the gold. I suspect many hairs will be pulled in the process.

Outside of Cars’ cast, all of Disney Infinity’s characters share the same basic move set, which is beautifully implemented, turning the act of platforming, racing, and third-person shooting effortless. Some characters offer additional actions. Dash, for instance, has super speed, making him more desirable than the Mike Wazowkis of Disney’s kingdom. Sorry, Mike. You're going to collect dust on retail shelves.

When characters level up or their unique challenges are completed, they earn tokens that can be redeemed for spins to unlock a random toy box item. This is the element of the game where I found myself cringing as the thought “I need more figures” crossed my mind. Making the Toy Box as deep as possible is an expensive venture, but it’s also a fun one that is backed by quality gameplay and a wealth of content for each of the launch play sets.

Disney Infinity is off to a great start and will hopefully be supported for years to come. The thought of Avalanche Software potentially tapping Star Wars, Marvel Comics, and other properties in Disney’s vault for upcoming sets makes this game’s future just as exciting as spending an afternoon creating adventures with friends.

Disney Infinity
Purchase More Info
9
i
Game Informer's Review System
Concept Disney Infinity is an action figure-based game that pushes players to use their imaginations to create unique adventures and worlds for their toys
Graphics The shared visual style helps tie all of Disney’s universes together. The animation and texture work are top-notch
Sound The announcer in the Toy Box is grating, and characters repeat dialogue way too often. The soundtrack is often surprisingly absent and lacking that festive Disney vibe
Playability All of the toys are fun to play. Toy Box’s building mechanics embrace simplicity, yet are deep enough to allow players to create their own interactive gaming experiences
Entertainment I enjoyed most of what Disney Infinity threw at me. The Toy Box and play sets are both great co-op experiences
Replay High