I just beat Disgaea Infinite, and I have no idea what the hell happened.

There I was, an ephemeral soul floating outside my sewn-together penguin body, possessing story characters from the main strategy/RPG entries in the Disgaea series in an effort to change history and not get my already-substandard wages cut. Things were...weird. Dark Overlord Laharl insisted on stealing Etna's pudding, fallen angel Flonne was obsessed with rare DVDs, and everybody (most of all, me) was very confused. By planting my own thoughts into their heads while they made decisions, I changed events as they unfolded. Then the credits rolled.

Eschewing the strategy/RPG gameplay of its forebears, Disgaea Infinite progresses like a choose-your-own-adventure through a series of fully voiced vignettes. The handful of characters follow intertwining paths, meeting up with each other and splitting up again over the fifteen-hour timeline the game is set in. A handy visualization tool shows the various chains of events and where they take the cast. Players relive this period over and over, trying to solve the mystery of Laharl's impending assassination by altering discrete decision points along the way. One hour after booting the game up for the first time, just as I was getting into the bizarre but internally consistent story, it was over. By blindly choosing different paths for the plot, I stumbled upon a win condition. Hooray? I still have no clue why I won, or who (if anyone) was behind the explosive pudding. I had been beginning to put together a set of pieces into a cohesive story, and a peculiar joy in unraveling a tangled skein of mixed-up delivery packages and insane character actions was sinking in.

I would go back and continue exploring the unusual tale if it weren't for the requirement to start a new game from scratch. The dialogue hits the same sweet spot of anime zaniness and slightly out-of-tune pop culture references that makes Disgaea such a unique and engaging setting. The characters and their interactions are as amusing as ever. The gameplay itself is simple to the point of absurdity, but that's true of all adventure games and does nothing to dim the excellent writing. However, the random nature of progression through the branching plotlines prevents Disgaea Infinite from being engaging as a game. As it is, this is no more than a briefly amusing spectacle for fans of the series.

6.5
About Game Informer's review system
Concept
A whimsical time-traveling choose-your-own-adventure set in the offbeat Disgaea universe
Graphics
The same high-res sprites that drive the cutscenes in the main series take center stage here. Literally, the same sprites
Sound
The English voice acting regularly crosses the line between good-cheesy and bad-cheesy, but there are classic moments here and there
Playability
Your interactions with the gameworld are simplistic to a fault, and the PSP's many buttons are more than equal to the task
Entertainment
There are germs of good ideas here, but even hardcore followers of the franchise will have a hard time looking past the arbitrary nature of progression
Replay
Moderately Low 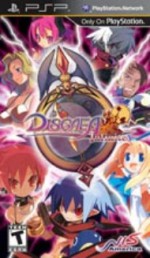