You’re down to a few characters and the Netherworld boss is still standing with a truckload of hit points. With just a few turns left before your inevitable loss, it’s time to consider your options. If you hadn’t already used your ultimate abilities, they could have done the job. Now, your best chance at victory is a penguin toss; you pick up your adorable penguin Prinny and fling the poor cretin and your foe, resulting in a massive explosion that wins the battle. Sure, it costs your shrieking Prinny its life, but you can bring it back as soon as you get back to town. Disgaea 5 is a ridiculous, over-the-top RPG romp filled with humor and a massive amount of customization.

If this is your first time with the series, have no fear – the opening hours provide a strong foundation as you slowly unlock new vendors and facilities in your hub area while collecting main characters and advancing the story. I enjoyed this method of advancement, since you’re thrust directly into gameplay, action, and upgrading. Instead of lengthy cutscenes, you just get in and start min/maxing right away. After every few missions, you obtain access to new features and options in your hub world, like a complex mechanic that lets you pull attributes out of items and attach them to others. This process of unveiling the systems and gradually building on them creates a potent feedback loop that keeps you coming back for more. As always, players can look forward to the post-game for never-ending dips into Item World, where you head inside your gear to access new secrets and ultra-powerful rewards.

The turn-based battles have little gimmicks to take advantage of in the early game, but become more open-ended later depending on how you fill out your crew. The game strikes a delicate balance by providing the player with a roster of incredibly powerful main characters who can pretty much handle all the heavy lifting, but with an advanced class system to help fill in the gaps. Players hoping to unlock the more advanced and powerful classes must prove themselves a variety of quests. Don’t worry too much about getting your new friends up to speed once you have them available, since you can level up new characters immediately for a little coin.

Players balance many things depending on the map, including whacking crystals to gain advantages, and sometimes taking advantage of the “tower” system that allows characters to lift each other up to fling them across obstacles or glean a positional edge (just be careful about throwing Prinnies). Many of these mechanics return from previous games in the series, but there’s a new important one as well: revenge. As your characters dish out damage and watch allies fall, they get revved up, enhancing their attributes and allowing them to unleash potent ultimate abilities. For example, Seraphina can charm all the male characters on the battlefield for a turn – a real game-changer. Other characters have similar powers, and you should experiment with them to get the most out of your troops.

Tactical combat is where the Disgaea series shines, but don’t expect a thrilling narrative to complement the battles. The story is as clichéd as it gets, and the characters are boisterous archetypes like the silent, brooding protagonist, the seductive princess who always gets her way, the bull-headed brawny berserker, the mysterious puller of strings behind the scenes – you get the idea. While Disgaea 5 definitely doesn’t win any points for an immersive or interesting story, the dialogue is often hilarious, and pulls things along nicely as you conquer level after level.

Disgaea 5 serves up a hearty helping of enjoyable tactical RPG combat, and lives up to the expectations established by its forerunners in the series. Games like this always face the danger of repetition as you plod through level after level, but Disgaea 5 manages keeps things interesting despite the grind.

8.5
About Game Informer's review system
Concept
Assemble a collection of warriors and monsters to take on various Netherworlds and the big bad Void Dark
Graphics
For an isometric RPG, Disgaea makes solid use of crisp visuals and assets
Sound
Everyone has plenty of ridiculous things to say, both on and off the battlefield. Catchy tunes make the sometimes-repetitive gameplay more palatable
Playability
Series newcomers might find the amount of content overwhelming, but things are packaged and presented in a digestible format, with an extensive tutorial and new options unlocking slowly over time
Entertainment
If you’re looking for a meaty, turn-based, tactical RPG, Disgaea 5 won’t steer you wrong. It has a ton of content to explore, classes and characters to master, and a robust post-game that provides hours of entertainment
Replay
High 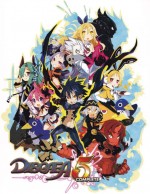