Dirt 2 is supposed to be an off-road specialty racing title. Maybe that conjures images in your mind of ATVs or sand buggies, but don’t be fooled – this is a racing game for everybody, not some niche title. Dirt 2 retains its focus on rally, rally-cross, baja, and cross-country racing, but much-needed changes in the career structure and online portions give the game enough juice to jump up to the big leagues.

This sequel puts a much greater emphasis on the car buying experience, which is a marked improvement from the first title. I felt a stronger connection to and enjoyment in the rides I bought. Even though their performance isn’t upgradeable and doesn’t offer the kind of hands-on customization of a Forza, the game throws a steady stream of liveries and dashboard trinkets for you to personalize your cars. I wasn’t as much into this as the fact that as you progress you buy conversion kits that enable the cars in your garage to follow you up the game’s career tiers. This creates a lasting pride in the cars that you’ve used and abused over their miles of ­dedicated ­service.

Dirt 2’s online portion has expanded to include full-on multiplayer races (as well as traditional staggered start rally races). Whatever mode you’re in, the game tracks your stats and presents them to you while you’re moving around your career camper/hub. The game even takes your offline ­activities – like how long you’ve been airborne – and seamlessly folds them into weekly online ­leaderboard tournaments.

Your garage and achievements help make Dirt 2’s career mode more personable, and its open structure is another of its strengths, offering even more choices than the first Dirt. Locations around the world open up fairly frequently, and there are always races open in multiple disciplines for you to try. My one complaint is that you end up re-racing locations like Battersea’s rally cross track a few too ­many ­times.

Dirt 2’s amenities aren’t the only thing it has going for it. Codemasters’ bread and butter – racing – comes through loud and clear. The speed and hair-raising moments of rally racing or the more technical rally cross tracks require different racing mindsets, and the more offroad truck races (no semis this time, though) are another matter altogether. The game contains the sophistication of a sim-racer while still packing enough pick-up-and-play fun for anyone watching from the couch. I don’t imagine, however, that there are going to be a lot of people content to simply sit and watch Dirt 2 without getting their hands on ­it. 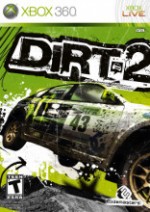 Dirt 2
8.5
i
Game Informer's Review System
Concept Dirt 2 fleshes out the first title, making it a more full-fledged experience
Graphics This is undeniably one damn fine looking game
Sound The soundtrack is pretty good, and I like how you can choose the voice of your co-pilot from either a female American or a Scotsman. Voiceovers from Travis Pastrana and Ken Block also add flavor
Playability Hardcore drivers might not like that you can’t tweak your rides under the hood. Then again, many of them feel similar anyway
Entertainment The first Dirt nailed the racing, and now it’s got the extra oomph in other areas to match
Replay High