No game in my memory has inspired such passions between announcement and release as Diablo III. The follow-up to one of the most popular PC games of all time was destined for a historic level of scrutiny to begin with, and one controversial decision by Blizzard after another poured jet fuel on the already blazing bonfires of fan anticipation and outrage. Five minutes with the final game is enough to settle the question of whether the art style is too kittens-and-rainbows for a gothic horror-themed game (it’s not). The auction house, radical skill system redesign, and always-online requirements are much more serious threats to Diablo III’s appeal. The ultimate tally comes out well in Blizzard’s favor, but not without reservations.

The first five days after launch were rocky for would-be heroes as server problems, extended emergency maintenance, and bouts of crippling lag rendered Diablo III unplayable during peak hours – exactly what fans had feared would happen after less-than-stellar results from pre-release stress tests. The issues baffled many, since Blizzard managed the launches of the last two World of Warcraft expansions with very few issues. Players who prefer to confront hell’s minions alone were rightfully furious that Blizzard’s decision to remove traditional offline single-player from the game locked them out of the game they had dropped $60 on. As of this writing one week after launch, the servers have been rock-solid for two days and the rough start will hopefully be forgotten, but players with no interest in multiplayer have every right to be angry at any server outage.

Server problems aside, Diablo III is an excellent action/RPG that carries the genre’s torch well and sets a new standard. The story is finally respectable even if it’s not BioWare-caliber, and much better integrated into the gameplay. Combat is still the heart and soul of the game, and hits all the notes fans expect. Skills that would be laughably overpowered in any other game start unlocking before level 10, and they’re not just ultimate attacks – many are what pass for regular attacks in Diablo III. Cleave, for example, is a basic barbarian skill that hits everything in an arc in front of you like a truck. Not only does it build fury to spend on even more powerful attacks, the secondary effects added onto it via the rune system make it even better. My favorite, Rupture, makes slain enemies explode for even more damage and leads to occasional hilarious chain reactions of demons popping off like fireworks across the whole screen. As amazing as Cleave is, it’s nothing more than a basic left-click attack used to fill the space between firing off even more devastating abilities when cooldowns and resources allow.

The ability to respecialize your character with no restriction or cost still divides the Diablo community, but I wouldn’t have it any other way. Part of the genius of the system is tied to the enormous variety of skills within each of the five classes. Having to pay (or, heaven forbid, start a new character entirely), would severely limit one of the foremost joys of Diablo III: experimenting with new skills and runes and the tactics they allow. I’ve switched primary attacks on my wizard a dozen times in her 50 levels, and every time it’s almost like playing a different class.

Don’t expect to spam one skill over and over and win with any regularity. The most impressive aspect of Diablo III is how its enemy design forces players just far enough out of their comfort zone to make them think on their feet without completely screwing over any one build or archetype. Regular monsters employ dozens of variations on ranged attacks, nasty melee strikes, teleports, buffs, debuffs, and zones of death on the ground. Minibosses come with randomly generated special abilities, like vortex monsters who suck you into melee, mortar foes who passively launch devastating fireballs, and frozen enemies and their deadly frost mines. Story-based bosses are reminiscent of MMO bosses, with different phases and attack patterns players must survive while chewing through their epic health pools. I’m currently playing my wizard as a crowd-controlling passive attacker who lets blizzards and venom hydras slow and poison entire armies of foes while avoiding incoming attacks -- a useful tactic in later difficulties when monsters can tear heroes apart in seconds. Compare that playstyle with the glass cannon fireworks of my friend’s wizard, who relies on extreme-damage disintegrate beams (which he affectionately calls “LAZORZ”) to obliterate his enemies before his rotation of defensive cooldowns ends. While we play the same class, our styles are completely different (and complementary when we’re playing cooperatively).

I’ve never played a game that encouraged co-op so strongly and made joining up with friends or random Internet people so effortless. Without saying a word, I’ve teamed up with buddies using the quick-join or one-click invite functionality. We naturally start using our skills to build off of each other, tackling enemies that would be difficult or impossible alone even without the significant boosts monsters get in multiplayer games. Because you can start a game on any quest stage you’ve reached, there’s no downside to jumping into a friend’s game for a bit and continuing your own quest later. Difficulty scales dynamically even within a session, so if a friend pops in for half an hour and then leaves, your quest continues uninterrupted.

The emphasis on co-op extends beyond the outstanding interface for meeting friends. Normal mode is simple to complete solo using any old combination of skills and crappy equipment. After defeating Diablo (spoiler!), you can take that hero into Nightmare difficulty. There you have to start playing smart, picking equipment with appropriate stats and building a skill loadout that works well with your playstyle. Even so, don’t be surprised if you have to grind a few levels or reset areas that spawn an impossible monster combo, as unique enemies start showing up with much nastier abilities. After Nightmare comes Hell, and good luck soloing that with any speed unless you’re rocking an exceptional build and great equipment. Past Hell, Inferno’s ultimate challenges await level-capped characters. Co-op makes everything much easier when, for instance, one player is slowing and freezing everything and another is LAZORing it to death. You can progress by yourself, but you’ll have a much better time with a friend at your side. Diablo III’s combat is the best the genre has ever seen. The loot game, on the other hand, is brought down somewhat by the presence of the auction house and uninspired itemization and stat design. Sets and legendary items are almost entirely restricted to the level-cap game, which removes one of the better hooks from the first 40 hours you play any given character. The enormous player base ensures that you can almost always find a level-appropriate item with nearly optimal stats for a relatively trivial cost at the auction house, which removes much of the thrill of finding the perfect loot drop on your own. The game’s internal math renders half or more of the stats that are generated on items pointless, as your primary attribute and flat damage modifiers are an order of magnitude more powerful than any other offensive boosts, and stacking a ridiculous amount of vitality is necessary to build a health pool deep enough to survive Nightmare and on. I wish there was more of a reason to care about health regen, life leech, cool triggered effects, and the other dozens of modifiers that clog up items, but all you’re accomplishing is gimping your character by stacking anything other than the stats listed above.

The real-money auction house is not available as of this writing, but I don’t expect it to make any difference in the leveling game since there is such a breadth of wonderful equipment available on the in-game gold auction house for cheap. The level-cap metagame has a lot of evolving to do, and I expect the RMAH will be part of that, but it’s impossible to say how it will shake out right now.

Diablo III is a great game, and every bit the landmark achievement in the genre that everyone expected out of Blizzard. The presentation and combat are second to none, and the co-op focus is well-executed and a natural fit for the genre. It’s a shame that the online requirement is a deal-breaker for some, whether because of a moral stance or a crappy Internet connection. The uninspired stat design is a bummer, as is the cheapening of good items thanks to their ready availability on the auction house. Whether or not you stick with the game for the long term through Inferno difficulty, I can’t imagine the gamer that wouldn’t have a great time with Diablo III for a trip or two through the story. 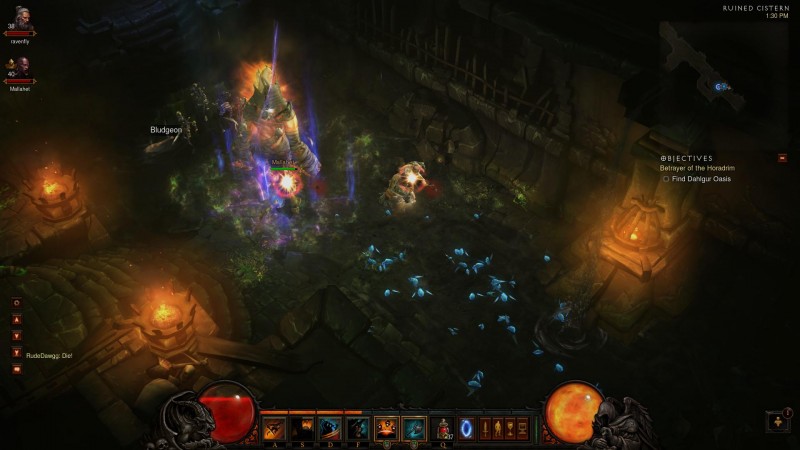 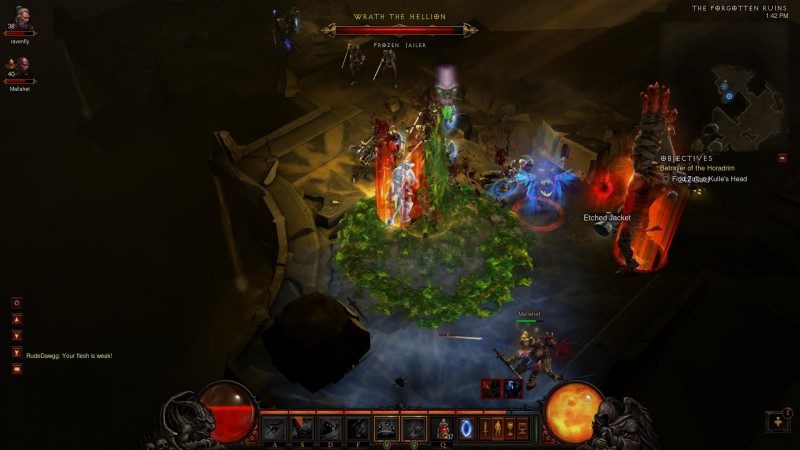 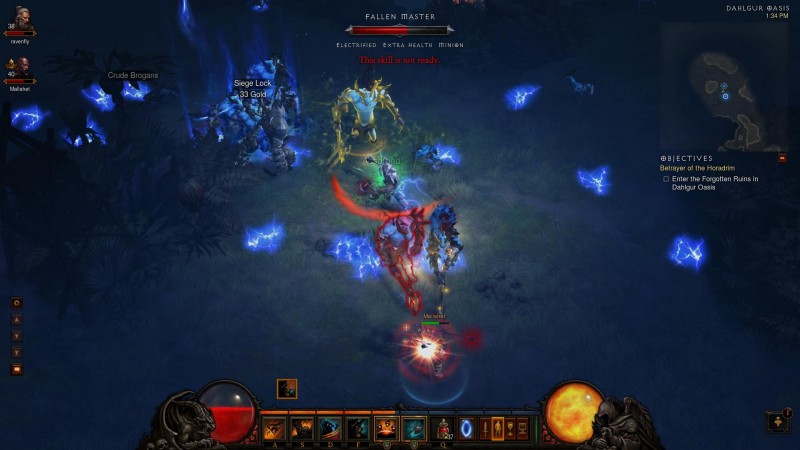 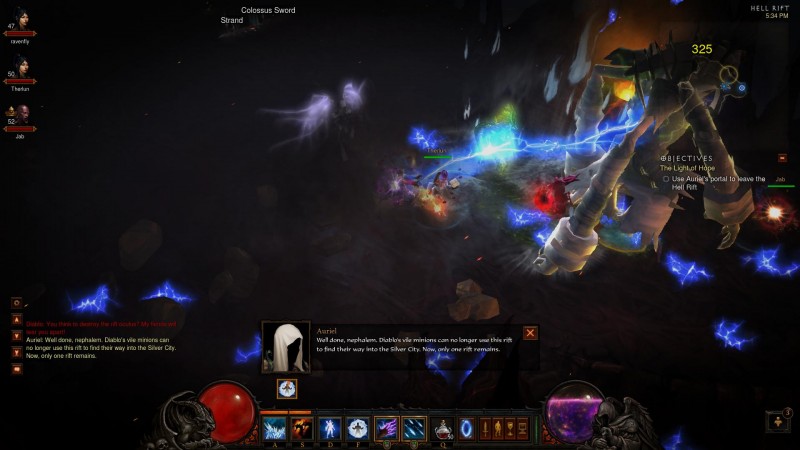 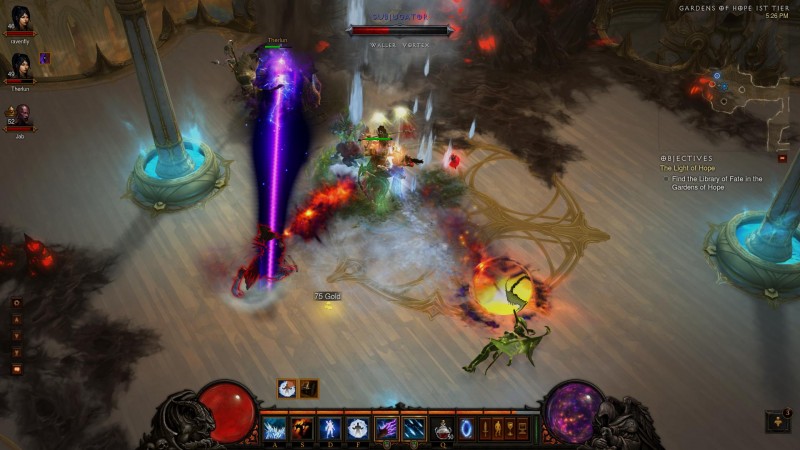 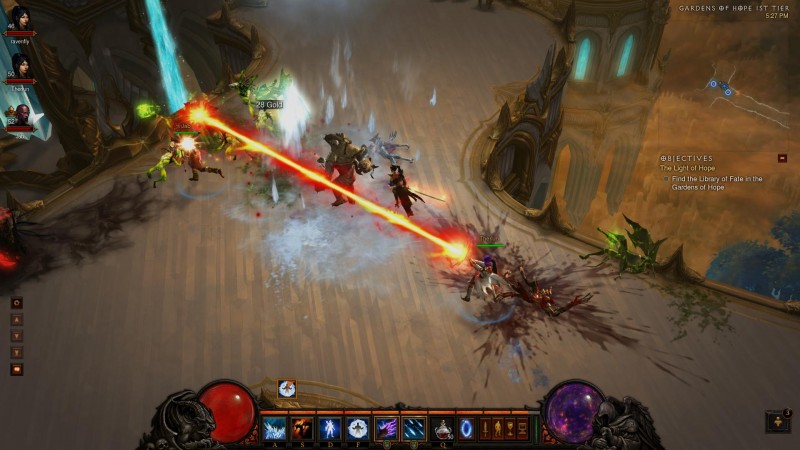 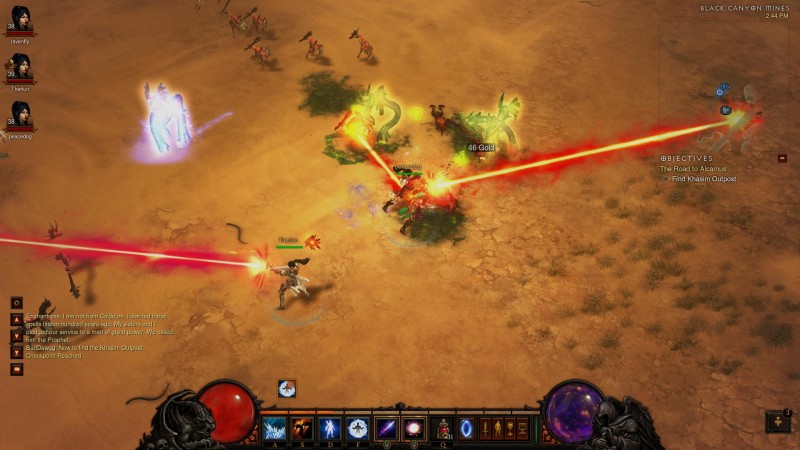 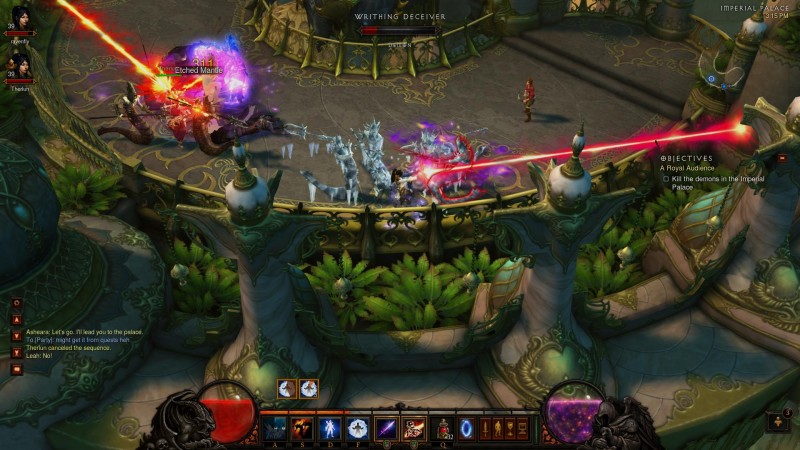 9
About Game Informer's review system
Concept
Slaughter your way through the hordes of hell with powers that make angels and demons alike tremble in fear, collecting endless loot along the way
Graphics
Anyone who thinks this is too bright or cheery needs their eyes checked. Animations are amazing, and the environments look like gorgeous concept art dropped directly into the game
Sound
The score is good enough to stay un-muted for forty-plus hours, but at that point you’re just scratching Diablo III’s surface
Playability
The interface is appropriately minimal. Finding and joining co-op games is so easy you almost have to actively avoid playing multiplayer
Entertainment
This is a fitting addition to one of gaming’s most celebrated franchises, though the auction house and itemization hurt the sense of discovery that drove me through hundreds of hours of Diablo II
Replay
High