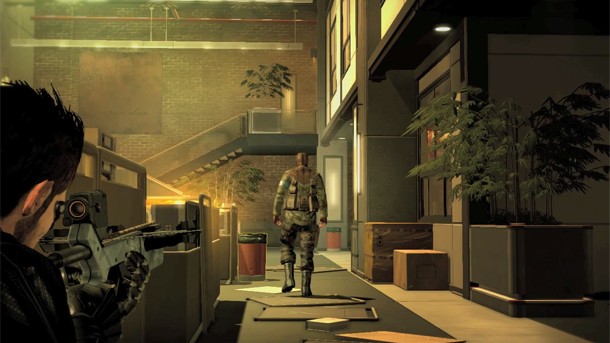 As we learned in the game's last developer diary, Deus Ex: Human Revolution poses a few serious philosophical questions. When a person's limbs and organs can be replaced and augmented on a whim, where does one's humanity begin and end? What responsibility does science have in these situations? If something can be done, does it mean that it should be done? Those kinds of head-scratchers extend to gameplay, as well. As a new video shows, players will have to grapple with the age-old question of whether to shoot bad guys in the face or back of the head.

This episode is all about stealth, and if you've played any games with sneaking elements in the past you should know what to expect. Players who want to take a quieter approach to combat can expect to see a lot of crouching and rolling in their future, as well as some fancy-schmancy active camoflage. Enemies also respond to sounds, so it's best to use silent weapons such as crossbows if you'd like to maintain your low profile.

Check out some of these tactics and more in the trailer below. And, as always, watch for the game on August 23 for the PC, PS3, and Xbox 360.