Almost a decade since Tecmo released the last entry in its Deception series, a new installment on PS3 and Vita feels like it came out of a time capsule. Blood Ties definitely follows in the footsteps of its predecessors, but the gameplay makes it feel like the developers haven’t kept up with the industry’s changes since the series was last on store shelves.

Deception titles traditionally put players in control of a scantily clad female lead that protects herself from waves of attackers using a large assortment of booby traps, and Blood Ties follows suit. These potential victims fit into basic archetypes like archers, mages, and swordsmen, and you can read a little about their personal lives if you want to know exactly whose life you’re about to violently end. Reading about how the soon-to-be skewered knight was looking forward to returning home to his sweetheart is amusing, but frequent repeats and generic info makes the charm wear off.

As you progress through the story, three witches communicate with your character, Laegrinna (the daughter of the devil), and they each represent a type of device. Caelea promotes elaborate traps, like the ones that allow you to fling enemies onto specific squares to set up another attack. Veruza prefers sadistic traps, which frequently involve tons of spikes skewering your foes. Lilia is a fan of humiliation, so she’s pleased with traps like banana peels and pumpkin masks. They each give you requests throughout the story, and you’re rewarded with extra currency (used for buying new traps) when they’re satisfied. In addition, new traps of a particular type are unlocked the more you use that type. For example, you might be rewarded with a rocking horse that bursts through the ground into an opponent’s crotch if you’ve been previously fond of making them slip on banana peels.

All traps are activated with the X button, and you can cycle between your placed traps with the shoulder buttons. It’s a less limited system than previous installments, and allows for some long sequences of torture. I’d frequently greet an entering enemy with spikes that emerged from the wall, then swipe him two squares away with a scythe. Then, I’d use a vacuum wall to pull him into more spikes before dropping an iron ball on his head and flinging him into a pit of lava. It can be extremely satisfying when your elaborate plans play out exactly as you hoped.

As you learn combinations of traps that work well, repeatedly recreating them in every new room you enter is tedious. Experimentation falls by the wayside, and combat devolves into running back and forth between rooms, waiting for enemies to step on a specific spot, and then going through the motions. The A.I. adds to the frustration, as enemies flat-out broke on me on several occasions. When this happened, I was forced to run into their inanimate character models until they were where I needed them, and then go through the killing process.

Blood Ties manages to shake up the environments a bit once you get past the initial castle areas. This game recycles the castle setting frequently, but also freshens things up with occasional variety like an amusement park. Many rooms feature specific methods of murder that you can lead your foes into, such as a killer merry-go-round and a speeding train.

I appreciate the new freedom that Blood Ties affords combos, but there isn’t much else in place that dramatically changes up the formula from what we’ve seen before. If you’ve been jonesing for another installment of a familiar format, this meets the requirements. It could also be a fun distraction for gamers who haven’t yet experienced Deception’s twisted sadism. However, despite the fact that it was recently developed and released, Deception IV feels more like a relic from 2005 than a modern game.

Not familiar with the Deception series? Check out our full Super Replay playthrough of Trapt. 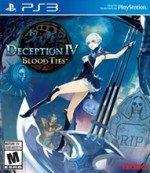 I appreciate the new freedom that Blood Ties affords combos, but there isn’t much else in place that dramatically changes up the formula from what we’ve seen before.

Purchase More Info
6.75
i
Game Informer's Review System
Concept Kill waves of invaders with tons of different traps
Graphics Generic character models and scantily clad women are par for the Deception course
Sound Some comical sound effects come out of victims as you burn, smash, and slice them
Playability Activating traps with the flexible combo system works well
Entertainment It’s great when your plans work out, but the gameplay feels dated
Replay Moderate