The horror of being hunted in the vacuum of space never quite takes grip in Dead Space: Extraction, a Wii-exclusive prequel to the exceptional Xbox 360 and PlayStation 3 space drama. Whether that’s due to the perspective switch from third- to first-person, the lack of dynamic lightning, or weaker scripted scares can be debated. One thing is certain: I didn’t jump once while playing this game. Without a suspenseful atmosphere, there isn’t much to fear, or, conversely, to draw you in.

Dead Space: Extraction runs on rails, pulling the player forward at a scripted pace. Developer Visceral Games did a commendable job of making this experience feel more organic. Shaky cameras constantly distort your field of view, and you can hear your character’s labored breathing. As intended, the bobbing camera combined with dancing shadows plays tricks on your eyes, and can lead to a few shots being fired ­at ­nothing.

This dynamic viewpoint clashes with the targeting reticle, a gigantic, beach ball-like display that takes up far too much of the screen, hiding the excessive brutality and highest quota of dismemberment per enemy body in any game. If you’re playing the game co-op, with two vibrantly colored cursors on screen, you’re not going to see much unless an enemy gets on top of you. This is another area where the game doesn’t retain the charm of its predecessor. Not having to worry about the positioning of your character makes for easier battles. Since the dev team held true to its fiction and hasn’t altered the enemies to attack in different ways, their sloth-like assaults are easy to repel.

Storytelling is the only area where Extraction shines, even more so than the original game. The plot implies that other things may be afoot in this universe than players may have thought, and the way this information is doled out – through multiple playable characters – is executed beautifully, especially when you don’t know if your character at the time will survive. Several of the story sequences conclude in horrific ways (more than just the chance of a good guy dying), and also connect nicely with the founding tale.

The action doesn’t do much for the series, or even the genre for that matter. The pacing is much slower than your typical House of the Dead, and the firefights never feel like a stressful ordeal. Dead Space fans should check it out for the fiction. All other interested parties should look elsewhere for a suspenseful ­shooter. 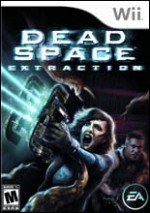 Dead Space: Extraction
7
i
Game Informer's Review System
Concept A rail shooter that lacks the genre’s intensity and the franchise’s suspense. The story is the only ­notable ­component
Graphics Amazing animations and environmental effects. The lighting isn’t as dynamic as I had hoped, and the obnoxious targeting reticle blocks far too much of ­the ­action
Sound Excellent voice work, and great attention has been paid to tying sound effects to ­each ­environment
Playability The weapons offer plenty of variety, but the action never heats up to a point where you feel you have to conserve ammo or use a specific firearm for a ­specific ­battle
Entertainment Even in this uneventful game, the series’ fiction stays strong
Replay Moderately Low