If misery factories like The Walking Dead have taught us anything, it’s that people are crappy and that they’re the real threats in a zombie-infested world. That may be, but some of us would rather experience the end of days like The Last Man on Earth, using the apocalypse as an excuse to ride a tricycle around while wearing a tuxedo jacket and snow pants. Dead Rising has straddled the line between horror and humor since its inception, and that hasn’t changed with the fourth entry – but it’s not shambling in the footsteps of what’s come before. Even though we’re back in Willamette with Frank West, Capcom Vancouver has infused the series with fresh ideas and some of the best action that it’s had in a decade.

Frank can’t seem to stay out of the game, in more ways than one. Capcom has introduced new heroes in the Dead Rising series with each numbered entry, but they don’t have the same staying power as the war photographer. Like a lot of people, I get a kick out of the lovable doofus. Sure, his jokes are enough to make dads nod appreciatively, but there’s something compelling about a hero that’s always just on the edge of failure at any given moment. His return to the scene of the first game is fitting, though he can explore far beyond the mall’s confines this time around.

I’ve personally been less interested in Dead Rising’s storylines than in its settings and characters, and Dead Rising 4 hasn’t changed my opinion. Yet another conspiracy needs investigating, with double crosses and intrigue. Why have the zombies returned, even though the infection was supposed to have been stopped with the Zombrex drug? Is the military involved? Why on earth would you live in Willamette, anyway? Frank gets pulled into the mystery by one of his photography students, and before long his instincts kick back in. Players who have been around for the long haul may recognize a few names here and there, but you can easily start the series here and not feel completely lost.

Even if the campaign’s conspiracy feels a little rote, Willamette is the best playground that’s been offered yet. It has everything you’d expect to find in a small town, from quirky shops to hardware store and homes – and the all-new Willamette Memorial Megaplex mall. Best of all, it’s easy to navigate. Unlike Dead Rising 3’s network of blocked-off freeways, the roads are clear – zombie hordes notwithstanding – and you can circle the map without leaving your car. You want to get out to explore the various shops and interior spaces, though. Dozens of weapon blueprints and other collectibles are hidden within the well-detailed environments, and you can do so at your leisure.

Capcom Vancouver has been streamlining the core of Dead Rising since it took over development duties with Dead Rising 2. Frank has loosened up since the first game, where he (and players) had to keep a close eye on his watch to make sure that time didn’t run out. Each subsequent game in the series has relaxed those timed elements, with DR4 eliminating them altogether. I’m sure there are going to be some people who cry foul at not having a rigid deadline in the background, but I appreciate the decision. Willamette is a big place with a lot to explore, and it’s nice to have the freedom without feeling like the meter is constantly running. You can take things at your own pace, knowing that when you’re done looking for panic rooms to loot or photographing graffiti, the next mission is waiting.

Frank’s new exosuit is one of the game’s back-of-the-box selling points, and it’s a nice addition to his arsenal. These military suits let him hit harder and run faster, providing a brief-but-satisfying feeling of near-invincibility. Battery life is woefully short on these things, however, making them more of a temporary power-up than anything else. You can also upgrade them in silly ways, such as combining the suit with a frozen-drink dispenser, which allows you to hurl tornadoes that turn vast multitudes of zombies into undead popsicles. I get a kick out of these fleeting moments of raw power – getting a 3,000-hit combo in the exosuit is easily within reach – but finding them and a suitable upgrade opportunity is disappointingly rare. For a game that’s otherwise so generous with giving players opportunities to feel powerful, it felt oddly restrictive.

The new combo weapons are fantastic. I rarely bothered to pick up mundane tools of destruction like RPGs or shotguns – you can use those in most shooters, after all. Few games give you the ability to turn enemies into piles of Christmas decorations with the wave of a wand or summon a legion of explosive garden gnomes. Improvised weapons and combo-weapon components are piled all over the world, and I rarely found myself unarmed. Something is almost always within reach, even if you have to resort to swinging a vacuum cleaner around for a little while.

More familiar tools are also given an upgrade in Dead Rising 4. Frank’s camera has been tricked out with a couple of new lenses, including night-vision and a spectrum analyzer. They’re both used to great effect in new investigation-oriented gameplay, where you have to do a little bit of detective work. These sections pop up in regular intervals throughout the story, challenging the player to find a series of hidden clues in a highlighted area. You might need to get a password for a laptop, which you can find by using a special lens on a notebook and snapping a photo. They’re a fun change of pace, though had a tough time lining up the correct shot on a few occasions. The most significant tweak to the series is in how different weapon types are slotted to specific buttons rather than being dumped into a common inventory. Before now, players could keep one item in their hands at a time, whether it was a shotgun, mannequin limb, or hand grenade. Now ranged, melee, and thrown weapons have dedicated buttons. It’s a big change to how you play, and works nicely. When you’re picking off some renegade soldiers at a distance and are swarmed by a few zombies, you can instantly knock them away with a spiked bat, then resume your shooting without having to cycle through your inventory. It comes at the cost of a little item flexibility – you can’t swing a cash register at zombies and then hurl it when you’re done – but I think it’s a small tradeoff. Killing hordes of the undead is still a visceral thrill, whether you’re doing it with a spiked bat or plowing through crowds in a hybrid tractor/wheelchair.

Capcom Vancouver has diligently iterated on the franchise, revisiting and tweaking elements that haven’t quite worked. That makes one of Dead Rising 4’s prominent stumbles stand out even more. Previous games have featured memorable encounters with special deranged survivors, which served as bosses. They’re called maniacs here (so long, psychopaths), and they all are disappointments. Before, these challenging fights were bracketed with cutscenes, showing why a clown may have lost his mind, and then paying off the fight with a gory climax. They were surprisingly poignant at times, conveying some of the damage that people endured during the zombie outbreaks. The maniacs in Dead Rising 4 have no fanfare; they don’t drop any exclusive weapons, and have no memorable qualities, aside from the fact that they might be wearing matching outfits. I always looked forward to meeting the next weirdo in the previous games, but dispatching each new maniac felt more like ticking a checklist once I realized how little they added to the world.

Players also can’t play through the campaign with a co-op buddy, which is something the last few games have supported. It makes sense from a storytelling perspective, but I can understand why some fans might be disappointed. A new dedicated multiplayer mode is set exclusively in the mall; you have to level up a new character there, but the campaign and multiplayer mode have some crossover. Your blueprints carry over to multiplayer, and there you can unlock longer-lasting weapon variants that migrate back to single-player. It’s a fun diversion, but the real meat of the game is still in the single-player experience.

I’ve been a fan of Dead Rising since the first one, and my enthusiasm has only grown over the years. I enjoyed getting dirty in Dead Rising 4’s madcap sandbox, and I’d expect that people who have kept up with the series will also have a great time wreaking havoc in Willamette. Players who wanted to get into it before but were put off by the time constraints should definitely give it a shot, too. In many ways, this is the game that people who just wanted to be a one-man zombie wrecking crew were probably hoping for all along. 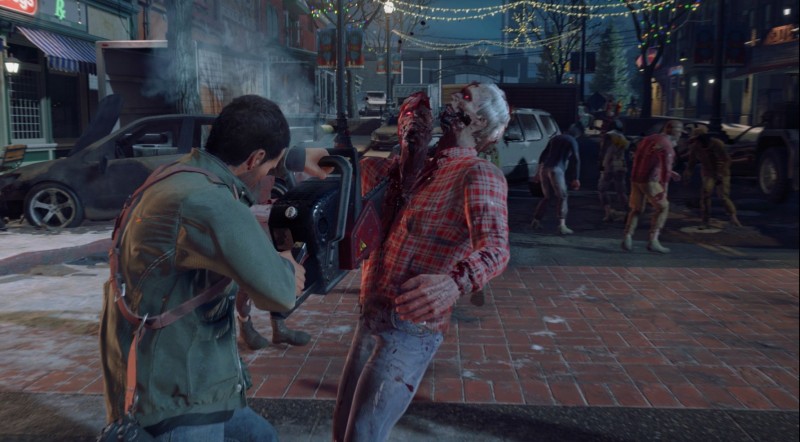 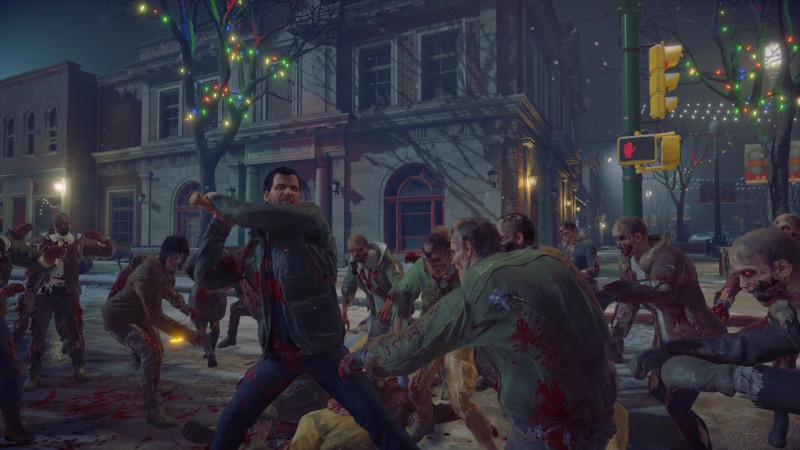 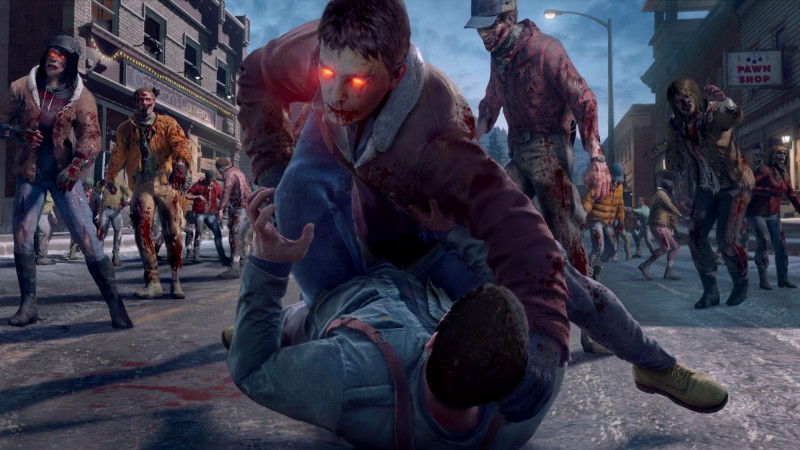 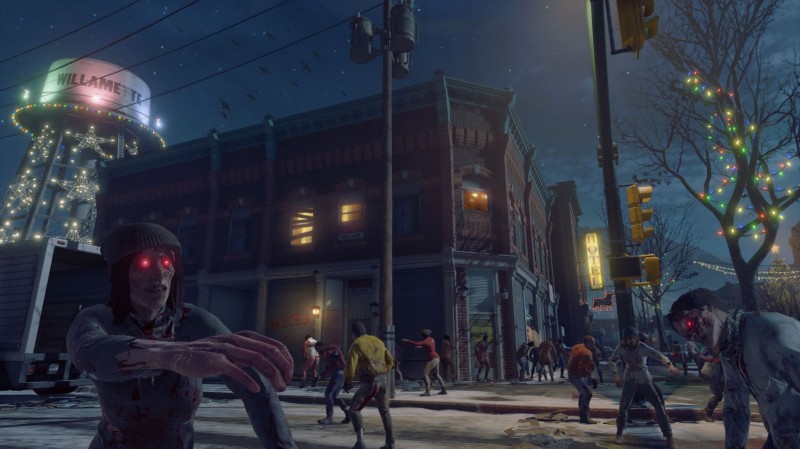 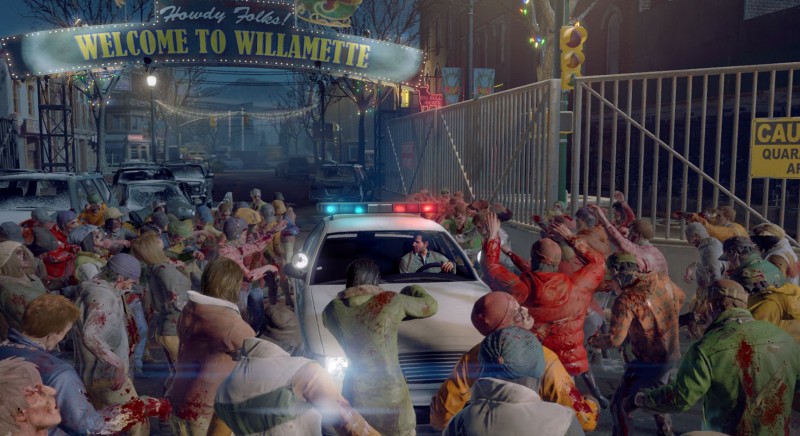 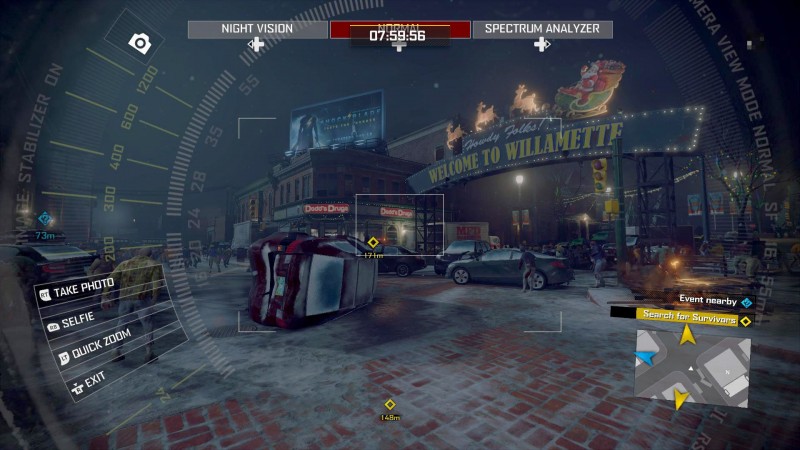 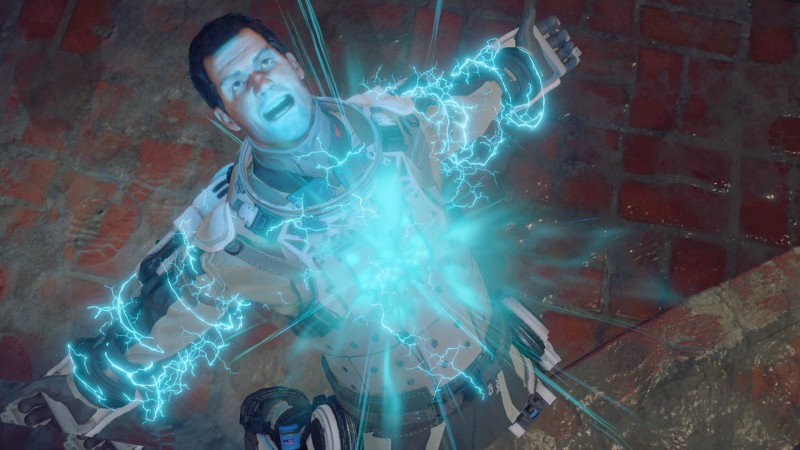 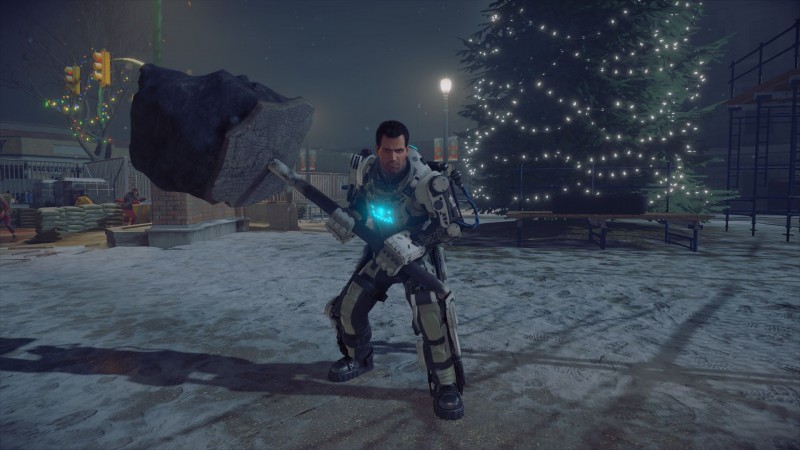 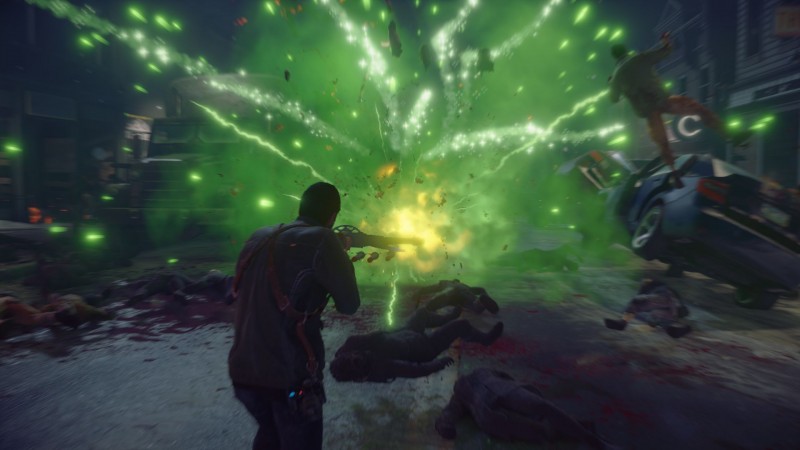 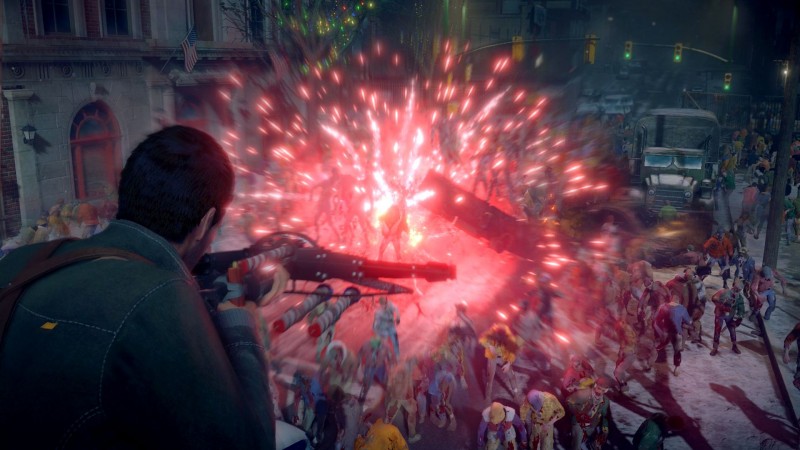 8.75
About Game Informer's review system
Concept
Take Frank West back to where the series’ outbreak all started – and kill a few thousand zombies along the way
Graphics
In spite of a few visual hiccups (and underneath all the gore), it’s a nice-looking game
Sound
Frank’s new voice actor nails his performance, but the standout work is from whoever created the demented new holiday songs
Playability
Combat is simple and satisfying, and the streamlined systems continue to benefit the player
Entertainment
This is the Dead Rising game that fans of freeform exploration and mayhem wanted from the original. Clock-watchers need not apply
Replay
High 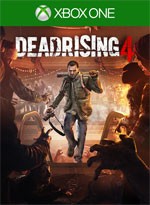