Capcom has released some more information about Dead Rising 3, including details on the game's co-op mode and psychos.

When a second player joins in a friend's game, they'll take on the role of a new character named Dick instead of a clone of Dead Rising 3's hero Nick Ramos. Players who join online sessions save the progress the team makes on their own save files, too. In other words, if you slash your way through several missions together with a teammate and then play your single-player game later, you can choose to skip the portions you've already completed.

It wouldn't be a Dead Rising game without the psycho bosses, and they're back in Dead Rising 3. This time around, they're each based on the seven deadly sins. Capcom's only released the identity of one so far, the syringe-wielding maniac based on greed. He's wearing plenty of jewelry, befitting the character, and we wouldn't be surprised if there was a little not-so-subtle jab at the health-care industry in there as well.

Take a look at the gallery below for loads of new screens, featuring greed, Dick, and plenty of zombie mayhem. For even more information on the game, take a look at our video interview with the game's producer, Mike Jones. 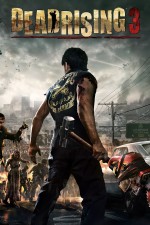