Seconds into the opening cutscene for Dead Or Alive: Paradise, you'll know exactly what you're in for. With nothing else in the frame, the camera focuses squarely on a pair of wet, jiggling breasts. Next up is an extreme closeup of a woman's ass, followed soon after by digitized fighting game females removing their jeans, lathering up their cartoonish bodies, and taking turns seductively licking the same ice cream cone. Considering this is technically a video game, you'd imagine that there's more to it than a bunch of hypersexualized girls frolicking around a beach resort, right?

Well, you'd be wrong. It doesn’t even contain a full-fledged volleyball game, and there’s about as much gameplay as there is plot in a typical Cinemax skin flick. You really aren't given any objectives, as you're simply plopped on the island with a pocket full of cash and no real direction. After going through the various menus, it becomes apparent that you should buy gifts for the other girls on the island so they'll like you. Once you've purchased enough bikinis, romance novels, and chocolate for a certain girl, she might be less prone to completely blow you off when you extend a friendly volleyball invitation.

The entire game is actually downright insulting to women, since they're depicted as vapid, dim-witted babes with no real desires other than tanning and having people buy things for them. One onscreen prompt even says, "The best way to make friends is with gifts."

On top of being a boring, menu-based gameplay mechanic, the gifts aren't even interactive for the most part. You can wear bikinis and clothing accessories, but many simply sit in an inventory screen with prompts to either "put away" or "look at" them. Looking at them doesn't do much except give you the occasional quip like "Is this an ultrasonic weapon or something?" (said when your girl looks at a harp). That sketchpad won't do much except give you some "You remember your time as a child" text, and all that food is simply a way to make your girl stop saying "I am so starving!" every time you go to the menu.

Little flashes of gameplay pop up in the form of volleyball, casino games, and "pool-hopping." The latter is reminiscent of any number of simple minigames, and requires you to simply press the corresponding onscreen button to hop across floating platforms. It works about half the time, but it will often completely misread your input and send your girl into the drink.

Dead Or Alive's first foray into creepy voyeuristic lotion-based fantasy came in the form of Xtreme Beach Volleyball. This title was a full volleyball game that just happened to have a bunch of pervy stuff on the side. This time around, the volleyball is pushed far into the minigame realm, requiring little more than a repeated mashing of the X button.

Other than these distractions and gift-giving, there's little else to do other than watch your girl giggle and pose on the beach while you snap photos of her like a sweaty San Fernando Valley smut-peddler. My girl was Tina, who had a southern twang like Dolly Parton, but only resembled her in two ways. Actually, scratch that reference...at least Dolly Parton's boobs adhere to the basic laws of gravity. These girls feature balloon-like breasts that operate independently of each other and bounce around like they're filled with unruly squirrels. If this game is supposed to be titillating to the misguided few who purchase it, I'm not sure why they'd make the breasts so ridiculously unrealistic.

Not only is Dead Or Alive: Paradise a bad game, it also drags down whatever reputation its namesake carried. Even if the DOA fighting games developed combat on par with Tekken or Soul Calibur, it would be hard to take the series seriously when they treat their characters in this manner. Developers like Capcom take their characters seriously, which is why you don't see Street Fighter spinoffs that feature Cammy and Chun-Li taking turns sucking on a popsicle.

It's disheartening to see games like this while we're simultaneously seeing titles like Heavy Rain push the industry forward with adult themes and new storytelling methods. While Heavy Rain is showing us a potentially more mature future for gaming, titles like Dead Or Alive: Paradise serve no purpose but to reinforce the gamer stereotype as the drooling, sex-crazed, socially awkward adolescent male. 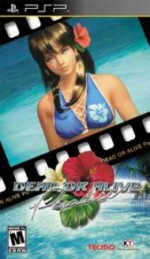 DOA Paradise wants you to let out your inner Larry Flynt.

Purchase More Info
4
i
Game Informer's Review System
Concept Ogle various hypersexualized girls as they prance around a beach resort
Graphics Even if you were into the idea of digitized boobs, they're laughably unrealistic
Sound Imagine if C&C Music Factory was commissioned to make the soundtrack for a new Sonic Adventure, and you'll have an idea of what to expect
Playability It's not an entirely broken game, it's just not much of a game at all
Entertainment The only way you'll enjoy this is if you're low on dignity and high on adolescent sex drive
Replay Low