The RTS genre is constantly attempting to reinvent itself, as much of the attention in the last decade is instead given to their progeny, the MOBA. Dawn of War sparingly borrows several elements from the emerging genre to add some framework to the RTS, but doesn't do so at great sacrifice to the predecessors that spawned it. Dawn of War III successfully taps into the flavor of the Warhammer 40,000 universe with spirited troops from three classic factions and larger-than-life Elite units. At the same time, it takes multiplayer in a different direction, borrowing from both previous games in the franchise and adding several new bits and pieces. The campaign is easily the weakest part – a trek through 17 stages that can seem excruciatingly dull at times, going through the motions of building up a sizable enough force to lay siege on whatever opponent you’re against. While many stages exist to play through, many of them end up feeling the same or completely forgettable. On a positive note, the player is forced to play as all three factions, learning their strengths and weaknesses, how to use elite units, and earning currency to unlock essential multiplayer customization options. I can only recommend the campaign as sort of glorified (and exceedingly long) tutorial for players who need to learn how to play.

Multiplayer is another story, and a refreshing take on the genre – though purists may be irritated by the inclusion of modern elements. As always, it comes down to a resource race where you and your team can decide to go for an early victory or attempt to capture and hold to win in the long term. It would be a mistake to identify the multiplayer as a MOBA experience, but lanes and bases absolutely make it a more structured fracas than previous titles. The priority remains on a war of attrition, battling over resource points and eventually overwhelming the enemy. Giant elite units like the majestic imperial knights, gorkanauts, and wraithknights command enough power to wade through enemies like butter, and feel extremely impactful and powerful. Dropping imperial knight Solaria into the middle of a fray, blasting off rockets, and mowing down minor infantry with dual Gatling guns is fun and exciting. Depending on how you view the RTS experience, you will either love or hate these game-defining units, along with other powerful abilities and characters available for the elite point resource, as they absolutely draw attention away from classic unit-to-unit warfare. Heroic units are not new to the genre at all, and while the slight but significant elements from MOBAS that the game does tap into may miff hardcore RTS fans, the tuning elements and selective borrowing made multiplayer enjoyable.

Dawn of War III is a mixed bag, featuring a forgettable campaign and enjoyable multiplayer, assuming you are willing to make some compromises to the traditional formula. I’m glad Relic is attempting some new tweaks while maintaining the sanctity of the almost-untouchable legacy of Warhammer 40,000.

7.75
About Game Informer's review system
Concept
Play as three popular Warhammer 40,000 factions in a battle to control territory and resources
Graphics
Big battles can get messy, but the war generally looks great as giant units cut swaths through common infantry
Sound
Appropriate and flavorful voice acting accompanies a satisfying score
Playability
The game is effective at teaching the basics so anyone can pick up and play, but Dawn of War III isn’t meant for genre newcomers
Entertainment
While the campaign can feel like a lifeless chore, the multiplayer options offer interesting tweaks on classic genre staples
Replay
Moderate 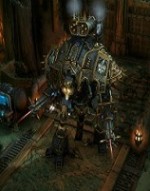