When Capcom released Bionic Commando in mid-2009, many praised its unique arm-swinging mechanics while simultaneously berating the linear playground provided. In many ways Capcom’s newest IP, Dark Void, echoes the same issues that arose within Nathan “Rad” Spencer’s attempted return to fame. Unfortunately, with Dark Void’s protagonist having a jetpack strapped to his back, the would-be video game legend has much farther to fall.

Dark Void’s ludicrous plot twists and dubious narrative hinge on a dimension-warped pilot named Will fighting alien-robots in the Bermuda Triangle.  The game’s weak narrative struggles to keep things even half-interesting. Generic, Nolan North-voiced Will and ex-lover Ava’s journey through the Void sees them befriending a band of clichéd survivors and fighting off a race of oppressive alien-robots. Among the survivors is a throw-away cameo by Nikola Tesla, the one-note creator of the jetpack. Once you’ve got the jetpack strapped to your shoulders you’re free to blast far away from the story’s laughable twists and groan-inducing ending.

Will’s jetpack is the true star of the game. It perfectly augments what would otherwise be a by-the-numbers, cover-and-fire third-person-shooter. Don’t expect to be rocketeering through the clouds right away, however, as the game paces you through the learning process of the pack’s various mechanics at an excruciatingly slow rate. Intense vertical combat firefights requiring you to hop from ledge to ledge are peppered throughout the game’s early stages, adding variety to the ground-warfare. Here gravity teams up with poorly timed grenades and fallen foes to create new hazards amidst your exciting ascent.

Eventually you’ll gain the useful hover and full-fledged flight abilities. Hovering itself dramatically changes the way firefights are approached, allowing you to blast over and around enemy cover to deliver a perfect grenade toss. Using the jetpack to soar above your clueless enemies’ heads and pick them off with your explosive machine gun rounds is such an empowering gaming experience that you’ll feel like you’re cheating. Simultaneously floating in the air and riddling enemies with bullets is an absolute riot, and by far the high point of the title. Even better, if you take too much damage you’re free to perform a rocket-blasted retreat and regenerate lost health. Keep this exit strategy in mind often, as Dark Void’s awful damage indicator consists of too-subtle blurring which results in many surprise deaths.

Many spots in the game have you and a band of useless teammates engaging in aerial battles against the persistent Watcher forces. These dogfight segments will frustrate gamers not used to aiming with the left analog stick. It’s difficult to feel like a jetpack-equipped badass when you’re forced to retreat into a canyon because flying saucers are somehow always behind you. It’s steep, but once you conquer the learning curve you’re capable of exhilarating take-downs.

Becoming proficient with Will’s jetpack is a challenging yet rewarding experience, but the game fails to take full advantage of its signature gameplay. Just when Tesla’s toy begins to feel like a part of you, the game falls back on the old trope of temporarily stripping you of your power. As if this little hiccup weren’t annoying enough, the game ends rather abruptly and you feel as if you were never able to fully stretch your wings after gaining all your powers. What’s worse, the level design within the game rarely feels like it’s truly testing your flyboy-mettle.

Dark Void is a game that I wanted desperately to love. All the pieces were in place to provide a visceral, freeing, shoot-em-up-and-blast-off experience. Unfortunately, the shining strengths of the game are buried underneath a thick layer of rust that only the thirstiest of air-junkies should bother scrubbing through. 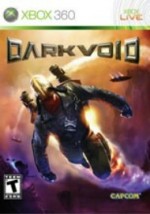 Purchase More Info
7
i
Game Informer's Review System
Concept Throw a jetpack on a two-bit Nathan Drake and toss him into another dimension, while hoping for the best
Graphics Tremendous scale comes at a cost, and up close the characters and environments are unremarkable for next-generation hardware
Sound An amazing soundtrack is topped by an unbelievable Mega Man-esque 8-bit version of the theme during the credits
Playability Hovering and shooting takes time to master while the tedious dogfights require expert left-analog stick precision
Entertainment When Dark Void is firing on all cylinders near mid-game it’s a blast, but the fun fizzles out far too quickly
Replay Moderately Low